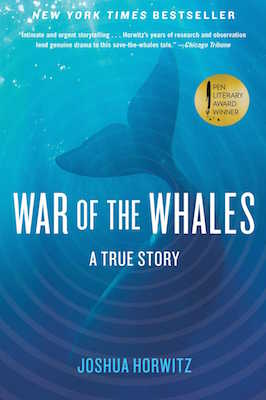 The following is from Joshua Horwitz's PEN/E.O. Wilson Literary Science Writing Award-winning War of the Whales which follows attorney Joel Reynolds as he uncovers the US Navy's submarine detection system, which has resulted in the devastation of whale populations. Horwitz is the cofounder and publisher of Living Planet Books, which specializes in books by thought leaders in science, medicine, and psychology.

The contagion of orca captures had begun, by accident, in 1964. The Vancouver Aquarium considered orcas too violent to display alongside its dolphins and performing seals. But it wanted to acknowledge their central importance to indigenous cultures. So the aquarium director, Dr. Murray Newman, commissioned a local sculptor to collect an orca specimen as a model for a life-sized courtyard sculpture. Whatever his talents as an artist, the sculptor was a lousy gunner. He set up a harpoon gun on Saturna Island, south of Vancouver, and managed to shoot a young orca at the base of its dorsal fin. He reeled in his catch and tried to finish it off with several rounds of rifle shots. But the animal wouldn’t die. Dr. Newman ordered the wounded animal towed back to the aquarium, using the line attached to the harpoon as a towline. He housed the animal in a concrete tank and named the first-ever captive orca “Moby Doll,” a revealing hybrid of Melville’s feared white whale and a child’s plaything.

Moby Doll became an instant celebrity, drawing thousands of visitors and dozens of researchers to the aquarium. William Schevill and Bill Watkins flew in from Woods Hole to record her vocalizations for their catalogue of biological sounds and to confirm that she echolocated like her dolphin relatives. What confounded marine biologists was Moby Doll’s docile, even playful disposition. Where was the storied ferocity of the bloodthirsty man killer?

Until the 1960s, the public perception of orcas was based on an amalgam of misinformation, myth, and legend. In the first century, Roman natural historian Pliny the elder observed, “A killer whale cannot be properly depicted or described except as an enormous mass of flesh armed with savage teeth.” Swedish naturalist Carolus Linnaeus—the father of taxonomy—classified the two kingdoms of plants and animals into groups according to their form. In the tenth edition of his Systema Naturae, published in 1758, he named the species Orcinus orca, Latin for “Belonging to the realms of the dead.” And a century later, retired whaling captain Charles Scammon would write, “Whatever quarter of the world Killer Whales are found, they seem always intent upon seeking something to destroy or devour.” As recently as the mid-1970s, a US navy diving manual warned that a killer whale will “attack human beings at every opportunity.” And yet, paradoxically, no one had ever observed an orca attack a human.

There is good reason why orcas are also known as killer whales.[i] Though properly classified as dolphins—the largest species of the family Delphinidae—orcas are among the world’s most voracious carnivores. In the Pacific northwest, “resident” pods feast on Chinook salmon, with each three- to five-ton orca devouring hundreds of pounds of fish a day. The biologically distinct “transient” pods of orcas prey on seals, sea lions, dolphins, porpoises, and other cetaceans. Hunting in packs like wolves, they can wear down and overtake whales many times their own size, including blue whales. Their two interlocking rows of conical-shaped teeth can grab seal pups off beaches or rays out from under rocks on the ocean bottom. Cunning and specialized hunters, orcas have been videotaped ramming great white sharks with their rostrums and then devouring them.

Top predators such as sharks, wolves, and orcas have always aroused fear and hatred among humans altogether out of proportion to any direct threat they pose. Unlike dolphins, which are plentiful around the world, orca populations are small and besieged by their only predator: man. Though they never had enough oil or blubber to interest whalers, orcas have often competed with humans for food in coastal regions, which made them perennial targets of retribution; sometimes even prompting a military response. In 1956, for instance, the Icelandic government asked the US navy to attack killer whales that competed with its herring fishery. The United States dispatched an anti-submarine air squadron to target the Icelandic orcas with 50-caliber machine guns, aircraft rockets, and depth charges. During that same decade, salmon fishermen in British Columbia lobbied their government to mount heavy artillery guns on hillsides overlooking the inland straits frequented by orcas. In the absence of direct military intervention, and with the tacit encouragement of their governments, fishermen on both sides of the Canadian border routinely fired on orcas from boats and the shoreline.

Moby Doll’s winning personality was chronicled in Life magazine and Reader’s Digest. When she died after three months of captivity from a skin disease she’d contracted in her tank, she was eulogized in newspapers around the world—even after a postmortem exam revealed that Moby Doll was a juvenile male. Aquarium director Newman sought to tamp down the public’s effusive killer-whale hugging. “I worry about this sentimentalizing,” he told a reporter from the Vancouver Province. “It was a nice whale but still a predatory, carnivorous creature. It could swallow you alive.” But Moby Doll’s friendliness to humans turned out to be typical, not aberrant, orca behavior.

* “Orca” and “killer whale” are interchangeable and correct names for the whale species Orcinus orca.

From WAR OF THE WHALES. Used with permission of Simon & Schuster. Copyright © 2015 by Joshua Horwitz.

In Praise of Melville’s Whale Chapters 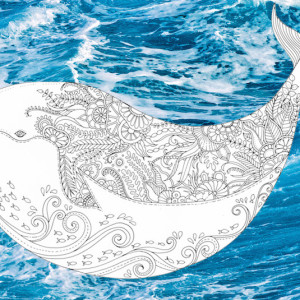 Coloring the Great Black & White Whale Adult coloring books became the subject of much discussion this summer when Johanna Basford's books took the top two spots...
© LitHub
Back to top