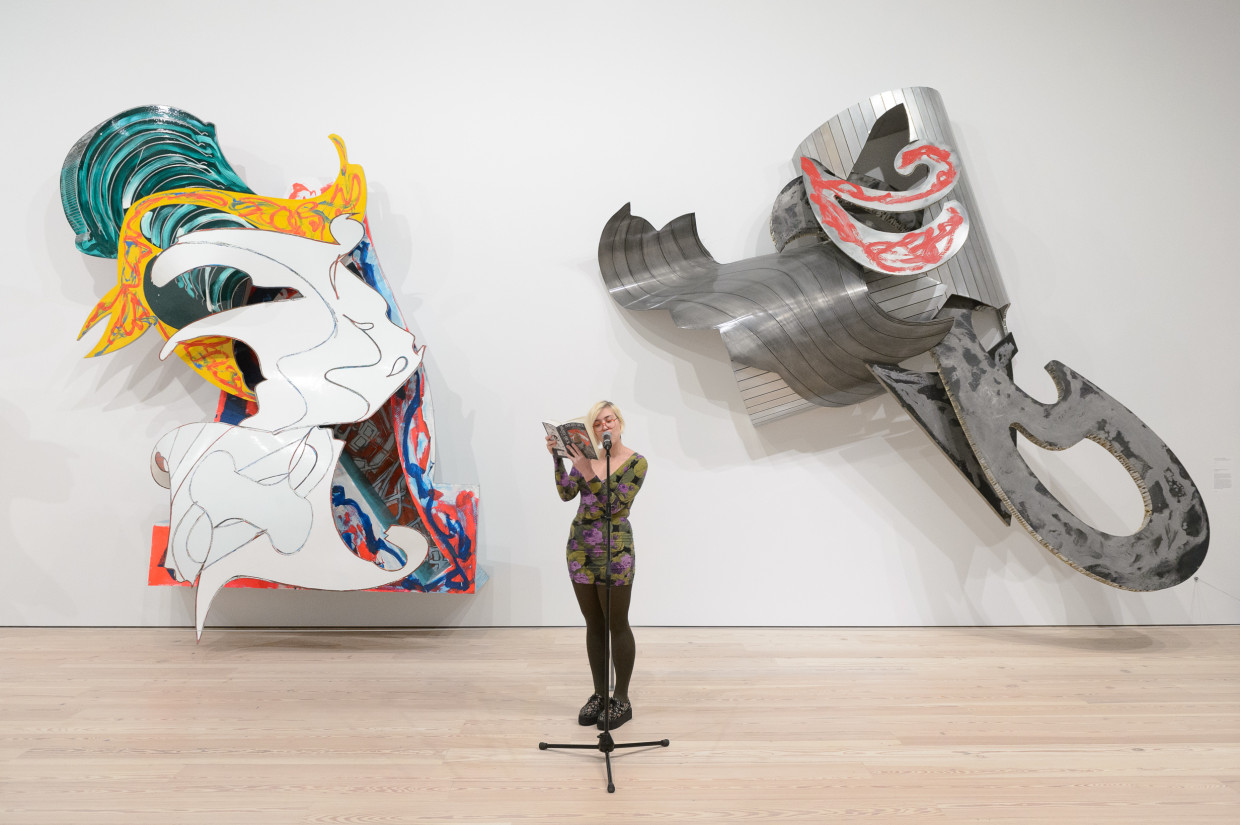 Trapped at a Moby-Dick Marathon

My foe rises before me, all metal and glass and contemporary design—The Whitney Museum of American Art. Despite the ungodly hour (11 am on a Saturday!), masses of culturally minded individuals throng in velvet-roped lines. By the grace of  event organizer Molly Rose Quinn I enter directly into the belly of the beast and ascend to the fifth floor to greet my fate, for the next 12 hours at least: the 3rd annual Moby-Dick Readathon.

Let us start with a brief history of the readathon. The inaugural event occurred in 2012 and took place in three independent bookstores over the course of three days. There are other readings across the country, as the New York Times noted, “with bearded, bespectacled acolytes flocking to seaside ports, sipping from thermoses of grog and readjusting their sweaters at the podium,” but this event was New York City’s first. This year, the event was compacted into two days and delivered before Frank Stella’s Melville-inspired sculptures. At this point, I think it is important to note the origins of the word “marathon”: a feat of endurance that resulted in immediate death.

From Friday’s portion: Lisa Lucas reading from the first half of the book, probably about whales.

Entering the gallery, I am met with a sizable crowd sitting on futuristic-looking stools watching Sir Salman Rushdie read. He is holding a personal copy of Moby-Dick. I think to myself, there is a lot of that book left. Salman murmurs to me, “No mercy, no power but its own controls it.”

A horrible photo I took to demonstrate how much book is left.

At this point, I am in high spirits, and there is plot going on. They have spotted a squid! It could mean anything!! The second reader of the day is describing how it undulates (Melville’s favorite word) in the sparkling sea. I love the squid. I love Moby-Dick.

I haven’t read Moby-Dick since I developed Stockholm syndrome for it in high school, years I have deeply repressed. I remember, however, the feeling of absolute derangement it inspired in me. I also remember that it slowly and vividly described every bit of the whale, like the most torturous and anti-erotic strip tease conceivable. Including the penis! This is what stands out in my high school mind. I Google “moby dick penis chapter” to determine how much more we have to get through. There are another 38 chapters.

The readathon is (very artfully!) arranged so that there is never a lapse in reading—Moby-Dick beats incessantly upon us. A reader will assume his position at the microphone slightly ahead of his section, signalling to the current reader that he must finish his paragraph and vacate the stage. There is nothing but Moby-Dick. The Moby-Dick is unending.

Jen Doll is now reading, and the ocean has turned from sparkling to a crimson pond of gore. A sweet whale is being stabbed to death! I am so sorry for that whale. “That was a truly horrific passage,” I say to her. “I always forget that Melville was so descriptive,” she says. “Sometimes I just think of him as another old dead white guy.”

But he lives on! His great-great-great grandson Eric Klaussmann is now reading. I notice how many children are in attendance, and I wonder if they are more confused by modern art or Moby-Dick. I try to talk to two toddlers in sweatpants to find out. They are poor interview subjects. Their parents, however, refuse to let me give up. “We’ve read it to them,” they assure me, as though that is a normal and expected thing to do.

//platform.twitter.com/widgets.jsMary Norris arrives wearing a shirt that says CALL ME ISHMAEL in the Papyrus font. Everyone else is a complete sartorial letdown, in comparison. Mike Lala reads one of the most disgusting passages I have ever heard, which describes the way the fat is stripped from a whale. I ask him to write a poem about it and send to me, which he obligingly does.

I go to the café upstairs to get coffee. All coffee in the Whitney costs $6 and you have to drink it right there, where they can watch you. I have already had a beverage-related infraction, where the security guard downstairs told me I couldn’t have water. Please, I nonverbally besought her, let me have this one small happiness. She did not. Lit Hub’s managing editor Emily Firetog texts me about a truly fascinating cauliflower and does not provide the follow-up I desperately need.

The origins of this cauliflower are still unknown.

I return downstairs and sit on the little hammock chairs they have arranged in rows for us, the audience. The resonance with the hammocks the whalers sleep in is nice, I think. I, too, am on this inescapable vessel pursuing a foreboding and mythical foe. We are all the crew of the Pequod.

I was expecting mania after three hours of this, but somehow I have entered a state of complete calm. Melville, however, is starting to really piss me off. He cannot get over the fact that whales can’t write and so smug about the fact that he can. “Has the sperm whale ever written a book, spoken a speech?” he wonders in chapter 79. “What has the whale to say?” he demands in chapter 85. Probably a lot, if you stopped stabbing them all to death.

Helen Phillips is reading now and describes afterwards the feeling of reverence and terror she experienced kayaking with orcas, which is how one should feel. Whales are majestic as hell. She says it seems we have reached the climax, considering how many whales have recently died, but it is only 2:30. The future stretches forward, as unfeeling and unrelenting as the sea itself.

Mary Norris reads next. Her shirt, she informs me, is from Melville’s house, of which she received a private tour. She is clearly very passionate about his work and explains how inspirational seeing his place of work and beholding his mountainous view was. Her life motto comes from Moby-Dick: “Oh, Time, Strength, Cash, and Patience!” I wish someone would put that on a shirt.

Alexandra Kleeman offers a lovely respite from the murdering and the bloodshed with a chapter about whale moms and their whale babies! Things never remain nice for the whales, however, and the sea is now filling with a combination of gore and milk (whale milk, notes Melville, would pair well with strawberries). Literary friend and fellow reader Kathleen Alcott commiserates; she, too, had to read about whale infanticide.

Alex Chee describes a very spirited audience member, who shushed fellow listeners throughout his reading and afterward said to him, “you’ve got a lot of guts, going up there with this shitty crowd.” Will Chancellor delivers a bit about diddling and can’t stop laughing. Elif Batuman reads a chapter that accuses Turks of cooking with ambergris, very expensive sperm whale digestive grease. “I don’t think this is true,” she interjects.

We have arrived at a truly insane portion of the text wherein Melville discusses putting his hands in vats of whale fat, read by Michelle Dean:

Squeeze! squeeze! squeeze! all the morning long; I squeezed that sperm till I myself almost melted into it; I squeezed that sperm till a strange sort of insanity came over me; and I found myself unwittingly squeezing my co-laborers’ hands in it, mistaking their hands for the gentle globules. Such an abounding, affectionate, friendly, loving feeling did this avocation beget; that at last I was continually squeezing their hands, and looking up into their eyes sentimentally…

Afterwards, I ask her who she would like to squeeze hands with, had she a fat vat. She offers Marilynne Robinson—I think like, Zayn from One Direction is more the vibe for this one, but I’ll take it!

Rebecca Dinerstein is wearing very appropriate whale-colored jumpsuit and reading her dialogue-heavy section with great enthusiasm. She tells me that her outfit is inspired by sailor suits. I ask her and Julia Pierpont what their favorite whale facts are. They pause thoughtfully and tell me they don’t have any. I realize that this is not a normal question. I realize that I am no longer a normal person.

//platform.twitter.com/widgets.jsIt is now 6 pm and despair is setting in. The sliver of the sky that I can see is black. The sun has set. This museum is all I know. Parul Sehgal is reading with her beautiful voice about how we will fish the whales to death. Melville then decides that since elephants are fine, “much more may the great whale outlast all hunting.” If you say so, Parul.

At 8 pm I take a break by walking through the Frank Stella exhibition. Of one of his black paintings, a teen says to her mom, “It looks like you could fall asleep on it.” So true, teen! A museum goer looks very concerned as she catches me muttering to my phone, “Please someone save me… from myself.” I tear up as I return to the gallery.

The security guard comes up to me and says, “Excuse me, miss.” I assume this is about my contraband water, or maybe spending an illegal amount of time in the museum. Instead, she asks, “How do I become I writer?” She has a great life story that needs to be told, she explains. I venture that she will need to query agents, who will ask for her full manuscript if they are interested and eventually pitch it to publishers if they decide to represent it. “So it’s a lot of work,” she says and walks away.

Emily arrives at 9 pm and discovers a hollow shell of a human. She takes me outside, for the first time in 10 hours. I imagine it looks something like those videos of beagles first encountering grass. We return to a reader describing my mental state: “I see not my reflection in the vacant pupils of thy eyes. Oh God!

” I look around the room of strangers and think to myself, I feel like all of these people are my best friends.

I am now enthralled with the (relatively) rapidly progressing plot. The Pequod has just encountered another whaling ship called the Rachel, which is desperately searching for a lost boat. It gradually emerges that the captain’s 12-year-old son is in that boat, and that the night before he had to make an actual Sophie’s Choice; the crew elected to rescue his other child. Chelsea Hodson is reading this part. Her voice is so soft and sad. Ahab says, no, fuck you, and sails away. I start to weep.

My notes from this section

We are now approaching the whale and the final face-off. Michele Filgate takes the stage at 10 pm with such liveliness that I emerge from my semi-catatonic state. The white whale now reveals his vicinity!! He is breaching, as a last act of defiance! Defy me no more, MOBY-DICK!!

Ahab and I curse our enemies together

Porochista Khakpour, the penultimate reader, is a vision of salvation in a fringed leather jacket. “I’d crawl somewhere to a cave, and slink there,” she reads. Same. Finally, Gregory Pardlo assumes his position. I see that there is a single page left. I feel a glimmer of hope. He reads the page and continues on to the epilogue, dashing my dreams. When he finishes, the room erupts in applause. We, me and all my best friends, have made it. Moby-Dick has been once again defeated.

The Science and the Beauty of Fog 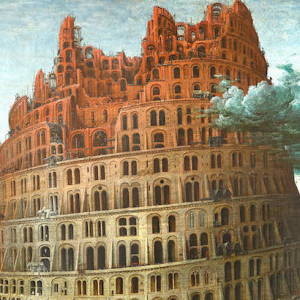 The Latvian student was struggling with his assignment. I had asked all the students in my writing class at Maastricht University...
© LitHub
Back to top
Loading Comments...