Ashley Shelby: The Apocalypse is Now

On July 12, 2017, the New York Times sent subscribers a push notification that read: “‘Maps will need to be redrawn”: a massive chunk of ice had broken away from Antarctica, producing one of the largest icebergs ever recorded.

“Massive chunk of ice” is maybe underplaying it: the state-sized portion of the Larsen Ice Shelf was large enough to contain cities. It is also more than a broken glacier turned iceberg. Though it’s not yet definitive that the breakup of the Larsen-C iceberg was a direct result of human-caused climate change—the Larsen Ice Shelf has been breaking up since the 1990s—it has served as a clarion message of potential climate change impacts. It’s a missive made more astounding by the popular idea that the continent from which this “massive chunk of ice” calved is well-nigh unbreakable.

It’s also an event that, until recently, would not have been out of place in a science fiction novel (as something so wildly improbable that it’s entertaining) or a work of climate fiction (as a warning of what could happen if this all spins out of control). But now it’s happened, and I would argue that, in addition to being an important moment in the global conversation about climate change, it is also a definitive event for climate fiction.

For as long as there has been a name for fiction about climate change, there has been an assumption that those novels are also “sci-fi.” And in some ways, the distance afforded the reader by dystopian or apocalyptic settings has, for decades, made certain cli-fi novels as reassuringly unlikely as androids dreaming of electric sheep in a nuclear irradiated San Francisco. Paolo Bacigalupi’s 2015 cli-fi novel The Water Knife, for example, is set in a drought-ravaged Southwestern United States, where the four-corner states are at war over water. Planetary futurists (and maybe even a few climate scientists) might not think such a scenario entirely out of the realm of possibility, but the average reader could find great literary pleasure in the read without having his or her existential buttons pushed (too hard). Kim Stanley Robinson’s recently published novel New York: 2140, an optimistic look at a Manhattan flooded by sea level rise, offers the reader a temporal buffer in the title itself. Plus, the water taxis are nifty and there’s underwater treasure in the Bronx.

But look at what has happened with Margaret Atwood’s The Handmaid’s Tale this year. Though it is not about climate change, it is speculative, and it is, perhaps, defining the cultural zeitgeist now. One reason for this, I believe, is that its so-called dystopian plot has, in the minds of many, left the realm of allegory; it now has a documentary feel to it. As we read Atwood’s novel, or as we watch the television adaptation, we are both compelled and repulsed—some, like me, are beset by a feeling of the uncanny, which, as Jacques Lacan once wrote, makes it difficult for us to suss out “bad and good, pleasure from displeasure.”

I find myself wondering if this where cli-fi as a genre is heading? Will Bacigalupi’s state water wars soon have the feel of contemporary fiction? What about Barbara Kingsolver’s climate-ravaged monarchs in Flight Behavior? Robinson’s sunken Manhattan? Or will we remain firmly entrenched in what Amitav Ghosh has termed “The Great Derangement,” an era of willful ignorance disguised as self-awareness (or, as I might put it, the lack of intestinal fortitude many of us experience when asked to frankly consider the profound danger climate change poses to our existence).

In a recent “Burning Worlds” column in the Chicago Review of Books, for which I was interviewed to discuss my recent novel South Pole Station, which features a climate-change denying scientist, Amy Brady wrote that for many years, cli-fi has concerned itself with tropes: “post-apocalyptic worlds, non-human (or once-human) characters, and futuristic technology.” What would happen, Brady asks, if cli-fi writers turned their attentions to “the here-and-now, in worlds that aren’t speculative or futuristic at all, but rather unnervingly familiar?”

As a novelist who writes climate change into her fiction, I think this idea may be the key to helping writers emerge from their Great Derangement, where cli-fi is, in the words of writer Siddhartha Deb, concerned with what is considered “the fluky and the exceptional.”

I call it First Impact Fiction.

First Impact is the term I’ve been using in my fiction to describe our shared world as the impacts of runaway climate change begin to make themselves known. There are widespread heat waves and droughts—but the cavernous Vegas casinos are still allowed to air condition their Parthenon-sized poker rooms. Sunny day flooding events happen ever more frequently in coastal cities—but no floodplains or beach-adjacent neighborhoods have yet been forcibly cleared of homes. Funky bird migration patterns have begun to emerge—the scarlet tanager is spending way too much time in the Jersey Pine Barrens—but there are no South American macaws at Connecticut birdfeeders yet. Twentysomethings are grappling with the ethical dilemma of whether to bring children into a world that is quickly becoming more and more difficult to inhabit comfortably, but the Offspring Cap-and-Trade beta program has not yet been launched in Park Slope.

This is the middle ground, then: a look at what the transitional existence might look like once the climate impacts that are imminent hit us. It won’t be catastrophic, except by degrees. It won’t be dystopic, except in pockets of civilization hit by massive natural disasters. It’s a world that will still have Craigslist ads—but the Missed Connections will be looking for the hot bearded guy at the Halloween party who was dressed at “FEMA Director Jesus”; the “Rides Wanted” will be for a lift out of an Impact Zone like New Orleans; the support groups will be for “Recently Displaced Millionaires” learning how to operate in a newly “mixed-income society” and cope with the loss of square footage and oceanfront views.

In South Pole Station, I looked backward, at the role climate change denial played in the early aughts when there was time to put the brakes on, rather than forward when the time had already run out. But in a post-Larsen C iceberg world, fiction writers who care about climate change may no longer have the luxury of indulging in the nostalgia of the garden-variety denialism of Inhofe and ExxonMobil or even in creating dystopias that allow the reader to pretend as if a climate-impacted world is merely sci-fi. By rendering a First Impact world, where readers see both the familiar and the slightly strange, we may be able to, through art and imagination, send the message that scientists and journalists have thus failed to effectively deliver. If we don’t want Paolo Bacigalupi’s biopunk nightmarescapes to become historical documents rather than imagined futures, if we don’t want Kim Stanley Robinson’s New York Atlantis scenario to be a blueprint, then perhaps we must stop being so greatly deranged.

Ashley Shelby is a former editor at Penguin and a prize-winning writer and journalist. She received her MFA from Columbia University and is the author of Red River Rising: The Anatomy of a Flood and the Survival of an American City, a narrative nonfiction account of the record-breaking flood that, in 1997, devastated Grand Forks, North Dakota. The short story that became the basis for South Pole Station is a winner of the Third Coast Fiction Prize. She lives in the Twin Cities with her family. 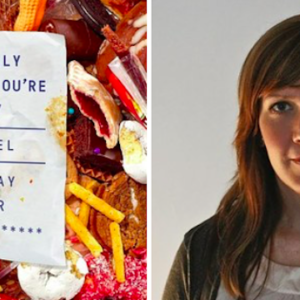 Lindsay Hunter’s latest novel, Eat Only When You’re Hungry, is flush with microcosms: tiny stories within the story....
© LitHub
Back to top