Lindsay Hunter’s latest novel, Eat Only When You’re Hungry, is flush with microcosms: tiny stories within the story. When Greg, the book’s sheepish hero, visits his ex-wife for the first time in years, he thinks, “he needed her to be fat too.” The want is a self-centered one considering the nature of the visit; the couple’s son GJ—short for Greg Junior—is an addict who’s gone missing.

After years in and out of rehab, GJ has finally fallen out of touch with both Greg and his mother, Marie. So, Greg decides to drive an RV from his home in West Virginia—where he’s cozied into retirement with his second wife, Deb—to Orlando, Florida, where he once lived with Marie and GJ.

That Greg is focused on his appearance at a time like this reveals not only the tender subtleties of his character, but also the wonky power dynamics between him and his ex-wife, and, possibly, the reason for his son’s erratic behavior.

That’s a lot for a single sentence to carry, but Hunter’s practiced at concision. Her first two books — Daddy’s and Don’t Kiss Me — are collections of flash fiction, packing the lives of rebellious teens and bored couples into small and dense spaces. Her first novel, Ugly Girls, follows a pair of young libertines as they arrange to meet with a predatory older man. Each chapter occupies a different character’s headspace, so the book still retains the kinetic quality of flash.

In an interview with Lit Hub, Hunter said that she approaches novel-writing the same way that she does her shorter works. “I would want to have this feeling of completion every day, or success,” she said. “I gave myself a word count every day that I had to meet. It made it feel like I was telling these little stories every single day. And it made it feel like I was placing these stones in the hopes that it would make a wonderful—god, I don’t want to say ‘wall,’ especially in today’s political climate—a wonderful dwelling. Just a wonderful dwelling where all are included and welcome. But it really felt like, even if I broke those away, if you just took a chunk out of that dwelling, it would still feel complete in some way.”

The content of Hunter’s work suits the form well. This is especially true in Eat Only When You’re Hungry, which combines the episodic nature of memory with richly described sensate experiences—namely, eating and having sex. Because Greg’s journey is mostly internal—he’s on a road trip, revisiting a place that’s emotionally significant to him—the story is told mostly through flashbacks. Entire chapters dive into memories of GJ during rare periods of sobriety, or thoughts of Marie during the couple’s libidinous early years. Much like actual memories, these scenes are quick and vidid. It’s only when Greg manages to emerge from the tumult of nostalgia that he’s able to realize what he’s been doing in present-time; he’s eaten an entire cheesecake with his fingers, or he’s surrounded himself, somehow, with empty bags of chips.

“I really wanted to write this character who is so rooted, so chained, inside his body. But I didn’t want to make him a buffoon,” Hunter said. “He is weighed down in every sense of the word. But sort of unwilling to face it at the same time. Unwilling to change. Maybe almost resentful of the idea that he should. He’s obsessive in his own head about claiming where he is, reassuring himself of where he is. Maybe that’s why he chooses to become to heavy. It plants him where he is. With every step, here, here, here.”

“I really wanted to give him the dignity of an inner life,” Hunter said, adding that, besides Roxane Gay’s Hunger, which is not a novel but a memoir, she’s struggled to think of other stories that give insight into fatness in a way that isn’t judgmental or self-loathing, but nuanced.

Subconscious thoughts of food—often pleasurable ones—saturate the way Greg views his surroundings, making him feel fully embodied. His bedroom is suffused with “buttery yellow light,” and it smells “sweet and clothy.” When he fondly recalls meeting Marie for the first time on the steps of their college library, he notes that she was eating a sandwich: “egg salad with little bits of pickle and olive.” Hunter also captures Greg’s revulsion to health food, writing, “the radishes released a fume that snaked from his throat up to his nose and made him want to hack the mouthful onto his plate.”

Food and body image are facts of life not just for Greg, but for all of the stories characters, each of whom is portrayed at times as lovely, and at other times as grotesque. Greg’s father, for example, is introduced as “[…] his bony old dad with paper-thin flesh and watery eyes and wet mouth.” Sex with Deb is described as a sad act filled with “shifting and wiping.” Each of the novel’s relationships illuminates the joy and horror of living in a body.

“I love what makes us human; I can’t help it,” Hunter said. “I set out and I’m like, I’m going to be very dignified, I’m going to be very Alice Munro and write this description, and then at the end it’s like, and, he fucking farted. I just love that stuff. I love it, and I love it in real life. To me that is like, the beauty of being a human being.”

“I’ve been thinking about how, when I think I’m being subtle, it’s like, I keep thinking of Prince with his assless pants on, you know what I’m talking about, the yellow suit and his beautiful butt,” she said. “That’s me thinking I’m being subtle.”

Hunter said it wasn’t always so easy for her to eschew her own ideas about how a writer should live and write. But, just as she accepted that quiet, Alice Munro-like descriptions aren’t the only means of setting a scene or evoking a feeling, she also crafted a philosophy of work that suited her lifestyle. She studied with Sarah Levine, who taught her that writing each day is like jogging; the more you do it, the less painful it becomes to continue.

“There’s this sort of tropy, pedestal-bound view of the writer freaking toiling his balls off. And I say his, because it’s a he. You know? But that’s not where the actual writing is,” Hunter said. “I resent it because it gives people who really don’t identify with that kind of work style, but are actually really creative, brilliant people, it makes them feel like imposters, and they shouldn’t feel like imposters.”

“We all hear the same thing,” she continued. “If you’re a writer you must go to the desk for, you know, whatever, four hours a day, eight hours a day. It’s incredibly intimidating because I don’t want to go to the desk for that long most days. And now I really can’t. Does that mean I’m not a writer in your eyes?”

In addition to writing, Hunter works full-time and co-parents two sons, Parker and Townes. While writing Eat Only When You’re Hungry, she asked for an extended leave from her day job, and when they granted her permission, she got to work.

“I had to be like, well, you know, Parker’s going to keep going to the sitter and I have to treat it’s like a job, every single day. That was the way I knew I could have the full focus and concentration that I needed to write this thing. It definitely added, sort of, ‘don’t fuck around, you could be spending this time with your child and you’re not,’” Hunter said. “I really want him to look back and be like, while I was going to Chuck-E-Cheese with my sitter, my mom wrote this thing, that’s cool.”

The sacrifices that parents make—both for the sake of their children and for their own well-being, which, in turn, can benefit their children, too—is the central subject of Eat Only When You’re Hungry. As Greg loses himself in the ebullience of Orlando—its strip malls and its cloying smells of processed sugars—he begins to see how his own struggles with impulse control and with bouts of heavy drinking might’ve impacted his son.

“It’s one of the first times in his life that he’s able to just think, and reflect,” Hunter said. “That’s why he has no real destination or no real plan. He’s just trying to figure it out.”

For Greg, figuring it out means relenting some of the control he has over his son’s life, which is something Hunter says she believes all parents struggle with.

As for his physical journey—his romp through the weirdness of Florida—Hunter says she’s repeatedly drawn to writing about her home state.

“You know, Florida is home. And even now—it’s starting to change a bit now that we have kids—but I think about home, I think about Florida,” Hunter said. “It’s such a rich place to write about. There’s Florida man, which everyone loves to make fun of, and everyone’s making dumbass political decisions. We’re just fucking weird. [But] growing up I didn’t really have the impression that we were the weirdos of the country. It was just like, ‘fuck you, we have Disney, man. We have beaches on both sides bitch.’ It was just a normal place.”

Hunter says there’s more to Florida than the strangeness that it’s so often characterized by. “There’s this lushness and this quiet and this heat that can scramble your brains and torture your heart,” she said. “So yeah, there’s a lot more to it. If people don’t want to realize that, that’s okay. We’ll keep it to ourselves.”

“I can’t get enough of returning there,” she continued. “It’s so vibrant to me. I’m sure that’s true for most writers and their hometowns. What more could you ask for? Nostalgia and setting and drama all in this little, fucked-up package. It’s perfect.” 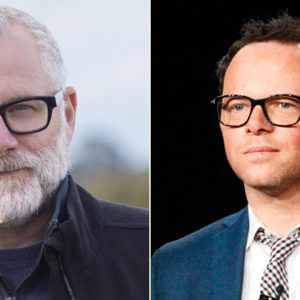 Tom Perrotta's new novel Mrs. Fletcher, out last week Scribner, comes on the heels of June's series finale of The Leftovers,...
© LitHub
Back to top