There's Even a Word For Emotional Labor!

Can a language be designed specifically to express the thoughts and feelings of women? In 1984, the linguist Suzette Haden Elgin wrote a science fiction novel to test this question. The result was Native Tongue, a dystopian tale of a future America that has been widely compared to The Handmaid’s Tale. It was a pioneering feminist experiment, sold as a paperback original with a big green alien on the cover.

Suzette Haden Elgin began writing science fiction in order to pay the tuition for her PhD in Linguistics, all while raising five children. The seed for Native Tongue came from her reading in the wake of the failure of the Equal Rights Amendment. Approved by Congress in 1972, the Equal Rights Amendment required the ratification of 38 states to become law. But grassroots opposition over the next decade, strongly backed by conservative women, arrested the momentum. It was after one this, one of biggest formal setbacks for the feminist movement in the United States, that Elgin read Cheris Kramarae’s Women and Men Speaking (1981).

Building on the work of Hélène Cixous and Luce Irigaray, Kramarae argued that existing languages were too steeped in patriarchal ideas to adequately capture the experiences of women. Intrigued by the idea of women as a “muted group,” Elgin wondered what a language would look like if it gave women the power to speak directly to their experiences. For Native Tongue, she forged an entirely new language, Láadan (pronounced similar to “Latin,” but “as if [one] were trying to sing it”).

Constructed languages (or “conlangs”) have a long history in speculative fiction. Tolkien wrote The Lord of the Rings in pursuit of this “secret vice,” writing to his son Christopher that the entire trilogy was in fact “an attempt to create a world in which a form of language agreeable to my personal aesthetic might seem real.” Meanwhile, the conlang with the most speakers is Klingon, which also boasts translations of Shakespeare and parts of the Bible. More recently, David J. Peterson built conlangs of Dothraki and Valyrian for the HBO series Game of Thrones.

Láadan, the conlang in Native Tongue, is distinctive for its feminist philosophy, focusing on words that efficiently describe “concepts important to women.”

Láadan, the conlang in Native Tongue, is distinctive for its feminist philosophy: according to Elgin, it focuses on words that efficiently describe “concepts important to women” and “emotional information.” Importantly, Láadan isn’t meant exclusively for women: rather, it is a language constructed with feminist principles in its marrow. For example, the Láadan word “radíidin” is immediately recognizable as a form of emotional labor, the often invisible work that falls primarily to women:

“radíidin: non-holiday, a time allegedly a holiday but actually so much a burden because of work and preparations that it is a dreaded occasion…”

Interestingly, Elgin argues that creating a new language is not especially difficult; indeed, there are a number of software programs that can help anyone do just that. The hard part is making it a living language. Achieving that is “like writing a novel or composing a symphony,” Elgin wrote on her website. “It’s not just a matter of meeting technical specifications. It could take a lifetime.” A living language requires its own culture. The conlangs of The Lord of the Rings, Star Trek, and Game of Thrones all have this in common.

To create the setting for her conlang, Elgin radically inverted the goals of the recently failed Equal Rights Amendment: rather than ratifying a guarantee of equal legal rights regardless of sex, Congress decides to do the opposite, ratifying amendments revoking women’s right to vote and right to work outside the home without permission of a male family member, then declares women legal minors. In this future dystopia, women are legally subject to men in every way.

For many, Native Tongue’s setting will bring to mind Margaret Atwood’s The Handmaid’s Tale, which was published one year later. Set in another patriarchal dystopian future, The Handmaid’s Tale is not especially known for its subtlety—which is unjust, as much of the brilliance of the book comes from Atwood’s semi-hidden wordplays and her discipline in leaving large swaths of information unsaid. In comparison, Native Tongue feels at times like a blunt instrument: it is text to Atwood’s subtext. Yet this ought not disqualify Native Tongue from regard; as Marleen S. Barr argues, feminist science fiction “enlarges patriarchal myths in order to facilitate scrutinizing these myths.” Science fiction creates unfamiliar worlds in order to explore concepts to which we are too close to see clearly in reality. Being extreme is a core aspect of its value.

“What would happen to American culture if women did have and did use a language that expressed their perceptions? Would it self-destruct?”

The characters of Native Tongue are professional linguists, serving as translators between Terrans and other humanoid aliens across the galaxy. Using their daily lives as a model, Elgin explores a number of linguistic concepts, from the native acquisition of languages to the potential barriers in communication with aliens that don’t, say, have mouths. Central to the conflict is the Sapir-Whorf Hypothesis, which suggests that the structure of a language determines a speaker’s perception and interpretation of the world. Elgin applies the Sapir-Whorf Hypothesis to her novel, eerily presaging the impact of the #MeToo movement: “What would happen to American culture if women did have and did use a language that expressed their perceptions? Would it self-destruct?”

The plot of Native Tongue flows directly from these questions: knowing the potential power of their new language, the women linguists prepare for revolution from their oppressors. But perhaps the most subversive aspect of the book is that the protagonist is a middle-aged woman past child-bearing age, a woman who is attempting to speak about her lifetime of verbal and emotional abuse. Before she learns of Láadan, Nazareth thinks to herself, “There were no words, not in any language, that she could use to explain to them what it was that had been done to her, that would make them stop and say that it was an awful thing that had been done to her.”

Láadan is more than a conlang. It is what is known as an engineered language, designed as an experiment to test a specific hypothesis. Quoted in the Afterword of the 2000 Feminist Press reprint of Native Tongue, Elgin stated her hypothesis was that “language is our best and most powerful resource for bringing about social change.”

After ten years and two more novels in the Native Tongue trilogy, Elgin believed that her hypothesis failed. “Láadan got very little attention,” Elgin remarked in a 2007 interview. “Not once did any feminist magazine (or women’s magazine) ask me about the language or write a story about it.” In fact, Klingon became the foil to her Láadan. “The Klingon language, which is as ‘masculine’ as you could possibly get, has had a tremendous impact on popular culture,” Elgin observed. In a blog post on her experiment, she couldn’t help but note, “Meanwhile, the Klingon language thrives — from which you are free to draw your own conclusions.”

Rebecca Romney is a rare book dealer at Honey & Wax Booksellers, and co-author of Printer's Error: Irreverent Stories from Book History (HarperCollins). She evaluates the collectible books on the HISTORY Channel's show Pawn Stars at their rare books specialist. Romney is co-founder of the Honey & Wax Prize, an annual award for an outstanding book collection conceived and built by a young woman. 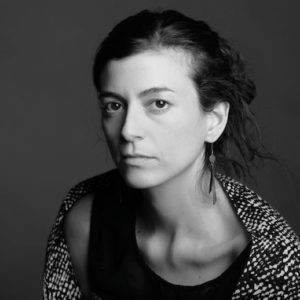 Surreal and haunting, spare yet complex, Samanta Schweblin’s fiction is like little else being written right now. Her work...
© LitHub
Back to top