The King Clan, Anne of Green Gables, Dune at Last?

This week in literary film and television news was all about old franchises and kids books. Yet another Stephen King son sold the rights to a project co-written with his dad, the long-tried, long-failed Dune reboot got a writer, and A Series of Unfortunate Events got even series-ier. Plus, there was movement on Corduroy, an illicit photo of Mary Poppins (not that illicit), and much more money for Cressida Cowell. The best part: a Latina witch is coming to the big screen! In more confusing Hollywood news, Tobey Maguire is becoming a director whose debut will be a Jo Nesbo adaptation, and Warner Bros. is getting sued by a writer who claims, in part, that the subjects of his book on paranormal investigators can’t be used as fair-use historical figures because of how much they lied. Spooky!

Is a brotherly rivalry afoot in the King family? Last week we found out that a novella Stephen King wrote with Joe Hill had been optioned for film—this week, it’s a novel he wrote with his other son, Owen King, that’s been picked up by Anonymous Content—”in a very competitive situation”—for a television adaptation. The novel in question, Sleeping Beauties, doesn’t even come out until September. A very competitive situation indeed! (Except, probably not, because Joe Hill and Owen King are also developing their own feature script Fade Away into a television show for Miramax—but still, it’s fun to speculate.)

And speaking of Stephen King: that trailer for It we showed you last week? It broke the global traffic record for trailers, pulling in 197 million views in its first 24 hours. Who even knew there was such a thing! (And in case you’re wondering, the record it broke was The Fate of the Furious‘ 139 million views.)

Paramount has optioned Zoraida Cordova‘s YA novel Labyrinth Lost, first in the Brooklyn Brujas series, about a young Latina teen from a family of witches who sees her magic ability as a curse. Which (get it) sounds super cool.

Will Hollywood finally capture the white whale of science fiction? I’m talking about Frank Herbert‘s Dune, of course, which even David Lynch couldn’t get remotely right on the big screen. The fact that Denis Villeneuve (director of Arrival) has been tasked with the adaptation is a good start, but the news this week is that Villeneuve has tapped Eric Roth to write the script. Eric Roth, of course, being the writer of Forrest Gump (for which he won the Academy Award for Best Adapted Screenplay) and Extremely Loud & Incredibly Close, among a host of other films. Though as i09 points out, Roth has only written one other science fiction script—for The Postman, starring Kevin Coster. Which was, um, not a success. So we’ll just have to wait and see!

Hey guys, Spiderman is a director now! Which Spiderman, you ask? Fair question: we’re talking about Tobey Maguire, who will make his directorial debut with an adaptation of Jo Nesbo‘s 2015 thriller Blood On Snow—the script to be written by Nesbo himself.

The Netflix adaptation of Daniel Handler‘s—ahem, Lemony Snicket‘s A Series of Unfortunate Events has been renewed for a third season, during which it will hopefully become even more unfortunate and eventish.

Warner Bros. is facing a $900 million lawsuit over The Conjuring franchise—based on the lives of paranormal investigators Ed and Lorraine Warren—which author Gerald Brittle claims infringes on his book on the couple, The Demonologist, and the deal they signed in 1978. Now where are they going to conjure up that kind of cash? Ha ha, just kidding, they definitely have it, probably in their fancy leather couch cushions.

Emil Ferris‘s graphic novel My Favorite Thing Is Monsters has sold to Sony in a high-stakes bidding war.

Brother and sister writing team of Jack and Kate Angelo have signed on to write the script for the CBS films adaptation of Corduroy, the classic children’s book by Don Freeman about a bear searching for his missing button. Say it together: awwww.

Someone snuck a snapshot of Emily Blunt and Lin-Manuel Miranda on the set of Mary Poppins Returns, based on characters created by P.L. Travers.

Netflix has optioned Daniel Suarez‘s Change Agent, which will be published by Penguin Random House on April 18.

The release date for the adaptation of Stephen King‘s The Dark Tower has been pushed back yet again—but not by much.

Cressida Cowell, the best-selling author of the How to Train Your Dragon series, has sold the film rights to her forthcoming fantasy series, The Wizards of Once, to DreamWorks Animation.

The first trailer for Netflix’s Anne, based on Lucy Maud Montgomery‘s beloved Anne of Green Gables, was released on Tuesday. The show premieres May 12:

The Uncanny Magic of Joy Williams, in a Single Paragraph 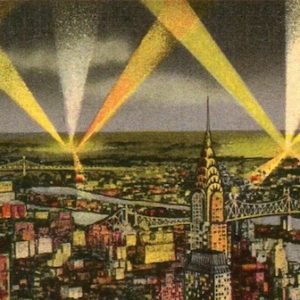 Queens’ artistic claims in the realm of music are well known, from the Ramones and Run-DMC to Louis Armstrong and Steinway...
© LitHub
Back to top