The Uncanny Magic of Joy Williams, in a Single Paragraph

I have tried and failed on numerous occasions to write something extensive and exhaustive about the fiction of Joy Williams: a body of work that has been unspeakably instructive to me as reader, writer, and human. These ill-fated attempts were well-intentioned—I wanted to speak back to the work that has been speaking to me since I was 18, and I wanted to better articulate why I cherished it—but every time I began, I felt as though a failure, a sin had been committed after writing the first sentence. I mean, how very dare I! I mean, who do I think I am, trying to immure the stories and novels that so significantly nourished me into a space wherein I would invariably denature them, drain from them their essence by placing them beneath an analytic lens. How haughty, how criminal the endeavor to break down what it is about the work of Joy Williams that’s remarkable and astounding and utterly singular when the what it is—I know, as anyone who reads Joy knows—is fundamentally and immaculately irreducible. To write about her work in an academic mode could be seen as an effort toward taming its innate wildness; its masterful ungovernability.

Having arrived at that unsuccessful juncture many times, I find that all I’m really able to do is praise. Praise the small moments in her stories that bespeak her genius; feats of language, structure, or craft—a word and concept about which she’s infamously unenthusiastic—that get stuck in the gears of my mind the way a particularly catchy pop song might.

“How haughty, how criminal the endeavor to break down what it is about the work of Joy Williams that’s remarkable and astounding and utterly singular.”

Lately, I find myself circling and circling around this subtle, brilliant move she makes in the story “Dangerous,” a story that first appeared in Granta in 2014 and was collected the following year in The Visiting Privilege: New and Collected Stories, which is, for this atheist, the closest approximation to a bible. (And I do happen to believe—earnestly and with a heart as big as a baby’s head—that the world would be a better place if, when one checked into a hotel, one found in the nightstand drawer not the Gideon bible, but The Visiting Privilege. I’ve never even met a Gideon.)

“Dangerous” is told in the first person, from the perspective of an unnamed 21-year-old woman whose father has died the year prior and whose mother, in the time since, has moved to a run-down adobe on 30 acres of land, where she’s become obsessed with building an enclosure on her property to house a soon-to-be-adopted tortoise. Like so many of Williams’s more recent stories—“The Mother Cell,” “Cats and Dogs,” “The Country,” and “In the Park,” to name just a few—“Dangerous” is interested in the sundering impact of loss, and the myriad manifestations of grief that follow it.

“Dangerous” never rests on the laurels of the perfect metaphor that serves as the story’s conceit. We’re only a few pages in when the narrator, after describing her mother’s building of the enclosure, remarks, “It’s dangerous work, as every part of the grieving process is if it’s done correctly. Don’t think I don’t realize what my mother’s up to.” This works as a kind of nod to the reader, too—Williams knows you realize what she’s up to in juxtaposing the death of the narrator’s father with her mother’s eccentric project. The story is far more complicated than that. Grief is.

But wait—I’m expanding the surface area of my interest here, when what I really want to talk about is one specific moment.

It comes toward the beginning of the story, as the narrator is describing her mother’s neighbors and their impressive water-harvesting system: a 26,000-gallon below-ground cistern that collects water from roof runoff during the infrequent but intense rains. Perhaps because of the frequency with which the mother speaks of the neighbor—whose name is Willie, but whose wife’s name we never learn—the narrator admits to a bit of concern. “I feared Willie might be a transitional figure in my mother’s life,” she says, “but he turned out to be an old man in a wheelchair with an old wife so cheerful she must have been on a serious drug regimen.”

Upon visiting her mother—and this is where I want to zoom in, maybe forever—we get the following passage.

They did have an ingenious water-collection system and I was given a tour of all the tanks and tubes and purifiers and washers and chambers that provided them with such good water and made them happy. They also kept bees and had an obese cat. The cat, or rather its alarming weight, seemed out of character for their way of life but I didn’t mention it. Instead, I asked them if his name was spelled with an ew or an ou. They found this wildly amusing and later told my mother they’d liked me very much. That and a dollar fifty will get me an organic peach, I said.

Pause. Notice that we are not given the cat’s name, and yet the narrator—in asking if it’s “spelled with an ew or an ou”—speaks as if we do know the cat’s name, or should. This creates not quite suspense, but something adjacent to it; something that shares suspense’s primary attribute of anticipation. The nondisclosure of the cat’s name—revealed neither before the narrator’s question nor immediately following it—would not, in other stories, be of great significance, but it gains its significance here by virtue of the fact that we’ve just been made keenly aware of the opportunity to be told something—the cat’s name—and then keenly aware that we have not been told, and this is telling. Williams throws a wrench into chronological expectation at the level of the line. She is withholding. She is playing with the story’s rate of revelation. And in a story that seeks to adumbrate the nature of loss and the grief that attends it, I can think of no better strategy for meaning-making than a maneuver which mimics grief’s intransigence; its upheaval of preconceived notions of how things should proceed and in what order.

The narrator goes on, picking up from the last line quoted above.

I don’t know why my mother’s enthusiasm for them irritated me so much. Soon they were gone, however, both carried off by some pulmonary infection that people get from mouse pee. A man my mother described as a survivalist later moved into their house and I was told little about him other than he didn’t seem to know how to keep the system going and ended up digging a well.

A paragraph indentation, and then:

It was Lewis with an ew that kept bringing diseased rodents into the house, is my suspicion.

I have an MFA in creative writing and a BFA in literature, yet mostly all I feel capable of saying with regard to the sorcery Williams pulls off there is: isn’t that fucking amazing? But in the spirit of attempting to better articulate a fraction of the effect, I’ll continue.

“These movements simulate the very essence of grief: its unwieldiness, its errancy, its total disregard for the yearnings of the grieving person.”

It has everything to do with the delay. The delay between our being made aware of that which we do not know—in this case, simply the cat’s name—and then the unexpected revelation of it. It doesn’t take so long that we forget something has been withheld from us, but it is long enough for us to consider—indeed, to believe—that we may never be told. And what I’ve just described there—this coexistence of knowledge and confusion and incomprehension, the lag time between a given moment and our understanding of it—does it not have a certain resonance with the way grief so often operates? That deferment of detail, that defying of narrative expectation, that disinterest in clarifying in a timely manner that which one has been made to see as concealed but knowable—these movements simulate the very essence of grief: its unwieldiness, its errancy, its total disregard for the yearnings of the grieving person.

This is what I am able to do when it comes to talking about Joy Williams: throw into relief moments such as these and hope others might join me in reverence of her work. An attempt to do anything else, I think now, would be not unlike the project the grieving mother takes up in the story: trying to enclose that which, like vapor, resists our apprehension.

Vincent Scarpa is a recent graduate of the MFA program at the Michener Center for Writers. He lives outside of Atlantic City, NJ, from where he tells those who ask that he's "at work on a novel." He tweets at @vincentscarpa. 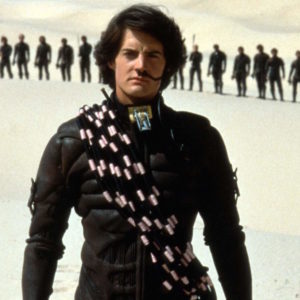 This week in literary film and television news was all about old franchises and kids books. Yet another Stephen King son sold...
© LitHub
Back to top