This week in literary film and television news, Hollywood was all over the brand new canon of literary classics (Colson Whitehead’s The Underground Railroad, George Saunders in general), but couldn’t help itself from beating a few old favorites further into submission (Jumanji, Doctor DoLittle). Speaking of George Saunders, looks like the producers of Ernest Cline’s Ready Player One are taking a cue from him and turning to virtual reality. No one was talking about the PBS Brontë sisters film, preferring, perhaps, to watch and rewatch the trailer for Hulu’s The Handmaid’s Tale. It’s almost here, America. (NB: that was a double entendre.) The HBO adaptation of My Brilliant Friend inched closer, as did the seventh season of Game of Thrones. Forest Whitaker continued to show his greatness by signing onto the Angela Davis biopic, and Stephen King—surprise!—continued to scare us all half to death. Death by clown, that is.

The week in literary film & TV news, in brief:
Production is set to begin this summer on the HBO-Rai adaptation of Elena Ferrante‘s My Brilliant Friend. All eight episodes will be in Italian, directed by Saverio Constanzo—who, to his credit, is not the least bit interested in who Ferrante “really is,” but has been corresponding with the author via email—and produced by Lorenzo Mieli and Mario Gianani for Wildside and Domenico Procacci for Fandango. This co-production system is similar to the one Wildside and HBO used for The Young Pope—let’s hope we don’t all get sick of punning about this one before it even starts.

You’ve probably heard (and celebrated) that Amazon is developing Colson Whitehead‘s The Underground Railroad as a one-hour original limited drama series, to be helmed by Moonlight‘s Barry Jenkins. A little bird told me that Whitehead has only one small edit for Lit Hub’s dream cast of the show.

The new teaser trailer for Season 7 of George R.R. Martin‘s Game of Thrones is mostly Very Serious Walking (With Some Pretty Regal Sitting).

Throttle, the novella co-written by Stephen King and Joe Hill, originally published in 2009 as part of a Richard Matheson tribute, has been optioned by Emile Gladstone at A Bigger Boat Productions.

In other Stephen King news: on Wednesday, Warner Bros. released the first trailer for their upcoming adaptation of It, which will begin ravaging theaters September 8th. It looks duly horrifying.

The new reboot of Chris Van Allsburg‘s Jumanji appears to have nothing whatsoever to do with Jumanji. (Not that the first movie had all that much to do with it either.)

Robert Downey Jr.’s Doctor DoLittle, which long ago, even before it was a twinkle in Iron Man’s eye, was known as a series of children’s books by Hugh Lofting, has been assigned a release date: May 2019.

Movie rights to George Saunders‘s Lincoln in the Bardo were picked up by Megan Mullally and Nick Offerman—that’s the old Saunders news. The new Saunders news is that Amazon Studios is finalizing a deal to produce an adaptation of his story “Sea Oak,” written by Saunders himself.

Warner Bros. and HTC will “exclusively distribute virtual reality experiences” to go with Steven Spielberg’s forthcoming adaptation of Ernest Cline‘s Ready Player One. Whatever that means!

To Walk Invisible, Sally Wainwright’s two-hour drama about the Brontë sisters, premiered on PBS on Sunday.

Forest Whitaker has signed on as an executive producer for the forthcoming untitled Angela Davis biopic.

Well, you’ve almost certainly already seen it, but just in case you haven’t yet set aside the two minutes, consider this your golden opportunity to watch the official trailer for Hulu’s adaptation of Margaret Atwood‘s The Handmaid’s Tale, coming April 26: 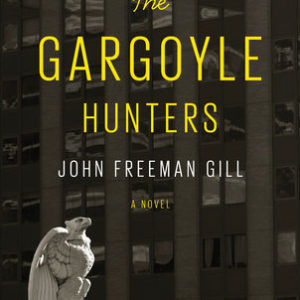 Ghosts of New York Why do we stay? Why do we members of this oddball tribe known as native New Yorkers stick around, decade...
© LitHub
Back to top