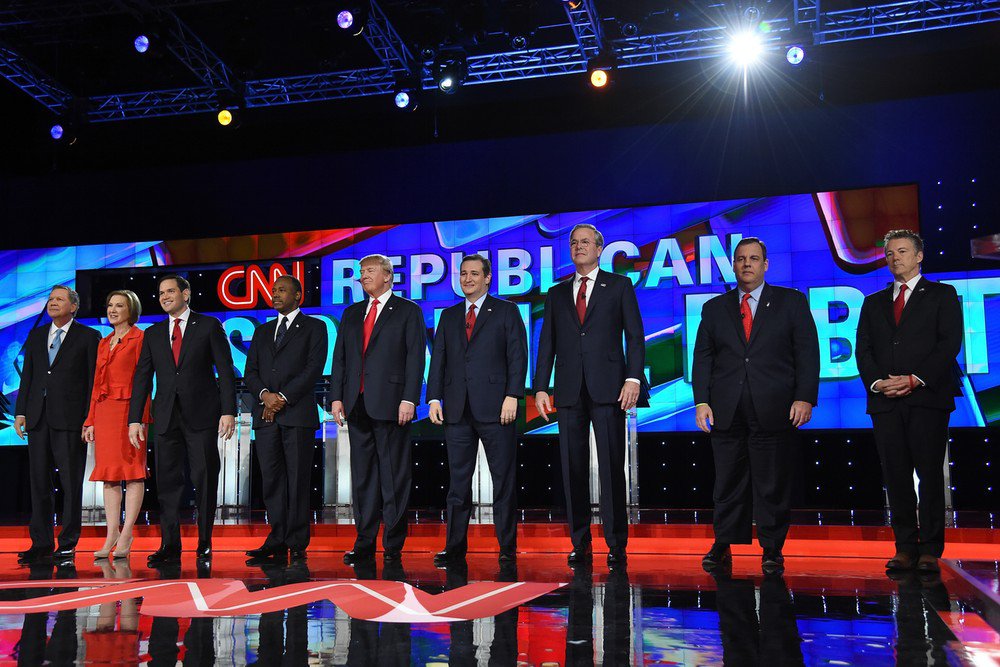 Carpet Bombs and false narratives, all in the name of democracy

We are honored that Literary Hub continues to call on us to point out and translate the deliberately deceptive language – or Spinglish, as we prefer to call it – used by the candidates during the Presidential Primary Debates. The December 15th Republican gathering at the Venetian in Las Vegas featured several fine examples of such language. Here are the highlights:

“We’ve been betrayed by the leadership that Barack Obama and Hillary Clinton have provided to this country.” Governor Chris Christie, who made this charge, offered as proof “just what’s happened today – the second largest school district in America in Los Angeles closed based on a threat.” Powerful words indeed, until you ask yourself (a) what Obama – or any other President – could have done, short of shutting down the Internet or confiscating all the world’s personal computers, to eliminate the possibility that someone, somewhere, might send an ominous email message, and (b) exactly how Hillary Clinton, who left the Obama administration almost three years before the threat was received, had managed to involve herself in the incident. (The “Spinglishness” of Christie’s charge becomes even more evident when you consider that, hours before the debate began, the message had been shown to be an ill-conceived hoax, quite possibly modeled after events depicted in the TV series Homeland.)

The Rubio-Schumer Gang of Eight. The “Gang of Eight” was a humorous nickname for a bipartisan group of senators – four from each party – who collaborated in 2013 to draft immigration reform legislation. Marco Rubio was one of those senators, as was New York Democrat Chuck Schumer, who is presumed to be in line for the role of majority leader should his party regain control of the Senate in the 2016 elections. Newly dubbing the group the “Rubio-Schumer Gang of Eight” was a nifty bit of Ted Cruz Spinglish: He managed to tar Rubio with the twin sins of supporting a “pathway to citizenship” (i.e., an opportunity for amnesty) for undocumented immigrants and collaborating with the enemy camp, while subtly reminding anti-Communist know-it-alls that Rubio was part of a group named after the four Chinese Communist Party officials associated with the worst excesses of the Cultural Revolution.

false narrative. Ben Carson used this semi-polite term to describe what he clearly regards as outright lies spread by his opponents about the readiness of, say, a retired neurosurgeon to lead the country.

“People are pouring across the Southern Border.” Donald Trump’s claim flies in the face of the fact that, as The Washington Post noted just this week, “immigration flows have fallen to their lowest level in at least two decades.” But that doesn’t fit Trump’s “narrative,” now, does it?

carpet bomb. Ted Cruz repeatedly used this term during the debate – as he has in other recent statements — to sound macho and tough. But what he’s actually proposing is attacking the Islamic State by picking very strategic targets – just as the Obama administration is now doing. Indeed, Cruz virtually admitted this when moderator Wolf Blitzer asked him, “To be clear, Senator Cruz, would you carpet bomb Raqqa, the ISIS capital, where there are a lot of civilians, yes or no?” “You would carpet bomb where ISIS is, not a city, but the location of the troops,” Cruz responded. “You use air power directed — and you have embedded Special Forces to direction the air power. But the object isn’t to level a city.”

“the oldest and smallest air force we’ve ever had.” Senator Marco Rubio talked about the aging of the U.S. Air Force as if spending cuts resulting from Obama administration policies are making it increasingly difficult, if not impossible, for America to carry out an effective bombing campaign against ISIS. Indeed, said Rubio, “This president has destroyed our military.” There’s no doubt that the Air Force’s fleet is getting smaller and older, but the actual reason for reduced defense spending is “sequestration” – across-the-board cuts in the federal budget which were agreed upon by a bipartisan act of Congress, not decreed by the President. And, more to the point, does the Islamic State really have the high-tech weaponry to threaten U.S. air dominance? What do you think?

“One of the things I would immediately do is bring back the warrior class –Petraeus, McChrystal, Mattis, Keane, Flynn. Every single one of these generals was retired early because they told President Obama things that he didn’t want to hear.” This statement from Carly Fiorina implied that American security was compromised because all the generals on her list offered President Obama strong military advice that he did not have the “leadership, strength, and resolve” to act upon. But, as PolitiFact has pointed out, General Stanley A. McChrystal resigned only after insulting remarks he made about Vice President Biden were reported in Rolling Stone; General David Petraeus left his post as Director of the CIA in the wake of revelations that he had shared classified information with a woman with whom he was having an illicit affair; and General John Keane retired in 2003, fully six years before Obama was sworn in as President.

political correctness. Early in the 2016 campaign, thanks to Donald Trump, the term “political correctness” became a Spinglish “Get Out of Jail Free” card. Playing it meant that no matter how much you insulted minorities or people with disabilities, or proposed policies impinging on their rights, any push back, real or hypothetical, would be labeled as wimpy, over-sensitive, and leftist. During the Fifth Republican Debate proceedings, other candidates jumped on Trump’s “PC” bandwagon with gusto. Ted Cruz proclaimed, “We will stop the terrorist attacks before they occur because we will not be prisoners to political correctness.” In the “undercard” debate (Nice to see boxing terms entering our sober political dialogue!), Rick Santorum announced, “We’ve defunded and tied the hands behind the backs of our intelligence agencies because of political correctness.” And, in his closing statement, Ben Carson declared, “I’m not anxious to give away American values and principles for the sake of political correctness.” (It would be interesting to learn which specific American values and principles Dr. Carson had in mind.)

[AUTHOR’S NOTE: We collected these terms, as we do after each debate, purely as a public service (or, as some have insisted on calling it, a public self-service). Rumors that we are offering these compilations for the purpose of promoting our recent book, Spinglish: The Definitive Dictionary of Deceptive Language, have been greeted with perhaps more credence than they deserve. 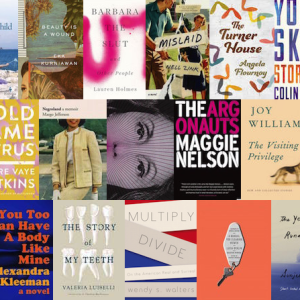 These are the books we loved this year.   Jess Bergman, Assistant Editor The Story of the Lost Child, Elena Ferrante...
© LitHub
Back to top