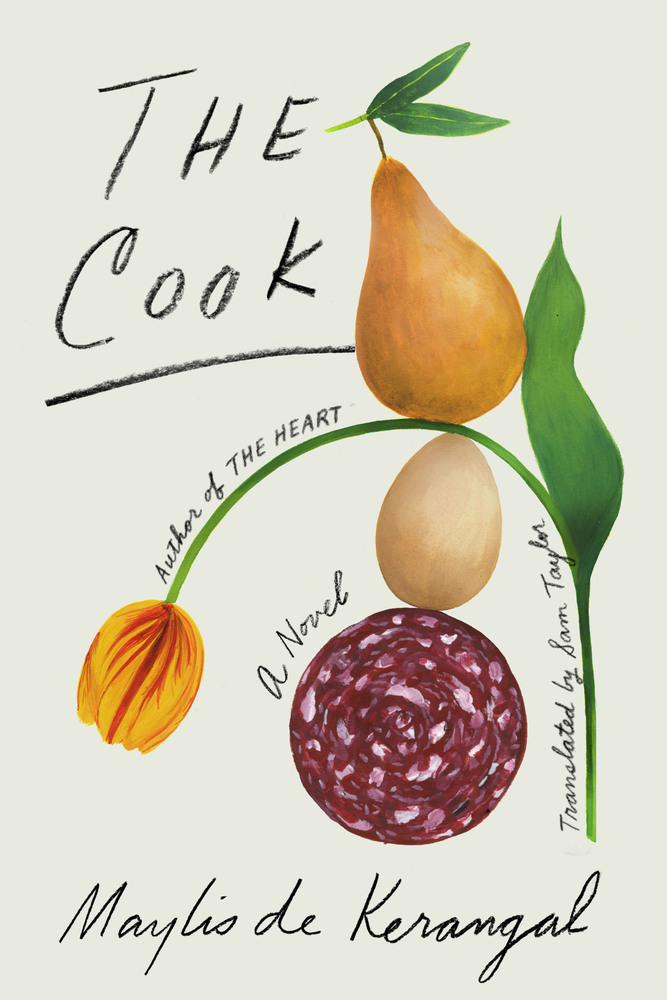 The following is from Maylis de Kerangal's novel The Cook, which follows Mauro, a cook, as he finds his path in life across the planet. Maylis de Kerangal is the author of several novels in French, including Naissance d’un pont (winner of the Prix Franz Hessel and Prix Médicis). She has also published a novella, Tangente vers l’est (winner of the 2012 Prix Landerneau). Réparer les vivants won the Grand Prix RTL-Lire and the Student Choice Novel of the Year from France Culture and Télérama. Its English translation, The Heart, won the 2017 Wellcome Book Prize.

A train moves toward Berlin. It speeds through wide-open spaces, past smoking fields. It’s fall. Sitting in a second-class car, head leaning against the window, is a slender young man, about twenty years old, traveling light, a book in his hands; I am sitting on the bench facing him. I decipher the title on the book’s cover—La cuisine de référence, the famous French handbook for culinary professionals—and see the three stylized chef’s hats drawn against a red, white, and blue background, then I sit up and lean forward, propelling myself into the book’s pages with their rows of illustrations and italicized captions, step-by-step photographs that feature no human face or mouth, only torsos and hands: precise hands with clean, neatly trimmed fingernails; hands holding metal, glass, or plastic utensils; hands plunged inside containers, hands wielding blades, each hand captured in an action.

The young man leafs through the book’s pages, consulting the table of contents and the glossary, the preface and the appendixes. He seems to be hovering around it without actually reading it, as if he didn’t know where to start. In fact, I think he doesn’t know much at all, not even what he’s doing on this train on this day at this hour, and if you asked him the question, if you put him on the spot and demanded, “Why Berlin?” I imagine he would shrug, close his eyes, let his head sink back against the seat, and withdraw into himself. The only thing he is sure about is the fact of sitting in this car, immersed in its imitation leather and gleam of brass, in this atmosphere of confinement—damp warmth, detergent smell—his shoes touching this carpeted floor; the only thing he feels with any certainty is the steady power of the machine that carries him forward. A grayish blur through the window, the landscape is an old mattress; the boy closes the book and falls asleep.

October 2005, and it’s freezing cold in Prenzlauer Berg as Mauro, travel bag slung over his shoulder, leaves the train station a few hours later and walks to a building on Lottumstrasse, where a friend of his has an apartment, rented for next to nothing, that will still be too big for the two of them. The staircase echoes, and when he reaches the landing, he finds the door open. Mauro enters, calls out—there’s no one. He sits cross-legged on the floor next to a coal stove sculpted like the base of a fountain. He looks around: the large room is arranged with a few pieces of restored furniture. He rubs his hands, realizes he’s hungry. He’s here for three months.

All Mauro remembers of this Berlin period is the mix of cold, white, empty days and dark, hot, overpopulated nights—a balance that suits him. All the same, for the first few weeks, the daytime impresses him with its empty hours and its fibrous texture, like glass wool. Solitary hours in the apartment while Joachim— his roommate—works in a hip bar on Rosenthaler Strasse; floating hours where even the slightest movement makes the apartment creak, prompting him to turn up the music to its highest setting so he can’t hear anything else. He chills out in this sonic cloud until the time comes for him to slip into another one—at the bar, where he goes to meet the others. There, he focuses on the gestures, expressions, faces, of those around him since he doesn’t speak a word of German, and he writhes until dawn among the crazed bodies.

One morning, though, he stirs himself, shakes himself like a young colt. A small loaf of black bread, a café americano, and he’s out the door. He goes out on reconnaissance, peacoat buttoned up tight, collar raised, less than ten euros in his pocket, and his gait now is that of a tracker on a hunt, as resolute as his path is random. The next day he goes out again, and he does the same the day after that. The streets in Berlin are organized clockwise: Pankow, Friedrichshain, Schöneberg, Dahlem, Charlottenburg, Tiergarten . . . Even so, he wears out his sneakers, his heels are covered with blisters, and when, from my window, I see him pass in the evening, on his way back down Lottumstrasse, I notice that he is limping slightly and remember a decoction of sage and green tea in which you can soak your feet to relieve the pain in the arches.

These urban wanderings are punctuated by brief pauses in the cafés of Neukölln to down a quick beer; prolonged pauses in the lines outside kebab shops at lunchtime, long queues where people breathe steam into the biting cold, where they stamp their feet, where they hop up and down, arms folded, hands wedged under armpits. The doner is a Berlin institution; there are more kebab shops here than McDonald’s. Mauro will taste more than thirty during his stay, finally deciding on his favorite—made in a van at the Mehringdamm U-Bahn station. Crunchy slices of meat, sweet grilled onions, crisp fries, soft bread, the smooth sauce soaking through all of it, and hot, hot, hot: the perfect fuel.

These long walks are a way of orienting himself, of mapping the city in his mind, but they are also a way of giving himself space to think: while his body steams in the icy air, while he cleaves his way through the congested geography of a city in the midst of metamorphosis, it is his own life that Mauro maps out and orients, his own life that he elucidates.

Mile after mile, he goes over the past few years. The semesters in economics that he devoured at Censier until he got his degree, passing the final exams only by pulling an all-nighter, the sole burst of intensity in a year as transparent as glass, as soft as cotton wool; basking in the mud pool of collective sloth, the days veiled and the nights thickened by the smoking of joints, everything lost in a generalized haze with zero mnestic peaks showing through. . . . Fuck, where did those years go?

The Lisbon parenthesis like a sun-soaked orange: the business school for young bourgeois heirs of the system, deserted in favor of an experiment in communal living, and all those roommates who were empty bellies, devoting themselves to four- or five-hour feasts consumed amid continuous talk, a confusion of tongues—Basque, Spanish, Portuguese, Italian—and Mia’s tongue playing with his; Mauro cooking enormous gratins, lemon blanc-manges, French toast, all sorts of soups and broths; the endless supply of homemade jams and farmhouse charcuterie, treasures wrapped in newspaper and smuggled at the bottoms of gym bags.

The “comedown” with the arrival of summer, the end of the Erasmus course, the master’s achieved, and it’s bye-bye, Lisbon, the death knell of the lovers’ banquet, and suddenly his life is a void, the future opaque. Then it’s all poverty and brooding, and the car breaking down on the drive home, in the courtyard of a Charente farm where his cousin lives with Jeanne. It’s midsummer; the countryside buzzes idly. For two months, Mauro does nothing. He has no plans, but he is sure of one thing: he will not go back to university in the fall.

At this stage of his Berlin wanderings, Mauro often takes a break. He goes into the first bar he finds, grabs a table near the door, and thinks about Jeanne.

A straw hat on her head, a pair of cut denim shorts revealing her sprinter’s thighs, small rounded feet in leather ballet pumps, and a staggering workload—sheep, chickens, pigs, vegetable garden. He watches her as she crosses the farmyard, spade in hand, concentrating. He listens to her when she sits down outside the kitchen door and says to him as she rolls a cigarette: So, you’re doing economics? Startled, he nods. He’s leaning against the hot wall, holding a beer. Jeanne is interested in economics: she takes part in discussions on blogs, in forums, reads theoreticians of degrowth, studies new networks for organic agriculture. She smiles: Aside from the cigs and the wine, the vast majority of what we consume here is produced on the premises, hadn’t you noticed? Mauro shakes his head; no, he hadn’t noticed anything.

She is the first cook he meets. A professional now, she’s been cooking for as long as she can remember. That summer, she shows him something beyond the gastronomical ingenuity of artists, which is the kind of cuisine he already knows, the kind done by friends who mix up their cultures. She introduces him to another realm—the realm of ecology, the territory of earthly resources. This is a vast expanse of fruits and vegetables: blond pears, speckled zucchini, new carrots and beefsteak tomatoes, tasty roots, elongated eggplants and wild herbs—chervil, sage, nettles.

It is a continent populated by small poultry birds that you grab by the neck, where there’s a pig called Napoléon, where the bull Soleil is king. It’s a humane kind of cooking. Another world. Something is happening. Mauro loves how she lives, the way she thinks, connected to the earth, to the seasons; he loves her energy and the purity of her moods—sunny cheerfulness, stormy anger—and I feel certain that he was blown away by the assurance of her gestures, her gait, her look.

He doesn’t go back to Paris right away, preferring to stay at the farm past the summer, working with the seasonal laborers and, in late September, leaving the Landes for Berlin, where he will meet up with Joachim—a way of extending this period of uncertainty. In Paris, Mauro stops by the Gibert bookstore in Place Saint-Michel, where he buys a Berlin guidebook and a stack of textbooks on cooking aimed at students taking professional exams.

That November morning, in the blue-aired apartment on Lottumstrasse where condensation streams down the windows, Mauro sticks an arm out of his duvet and plunges his hand into his duffel bag, waving it about inside as if testing the temperature of bathwater. This exploration, intended to bring him a few euros in change, leads his fingers to brush against the cold cover of one of those books on cooking, forgotten there, never opened. He takes it out and stares at it in surprise, as if he has just carried it up from the depths of time to the surface of the present. Then he gets up and walks to the Bibliothek am Wasserturm, on Prenzlauer Allee. At what moment, at what precise moment, does the course of one’s life narrow, solidifying this particular path as a possible or desirable future, this path and not that one or any other? I often think that it was during this stay in Berlin—of which he retains only an impression of cold and of long distances—that Mauro began to emerge from latency, that kingdom of youth. And so it is that he finds a seat in the reading room and opens the book. The library is a modern, clear, calm place. It’s warm in there. 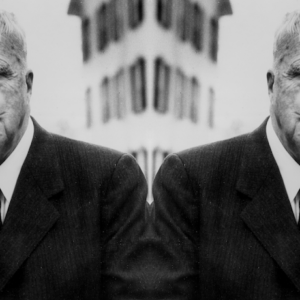 Lit Hub Daily: March 26, 2019 “Taken as a whole, her work forms a constellation of stories about immigration and all its complexities under the motif...
© LitHub
Back to top