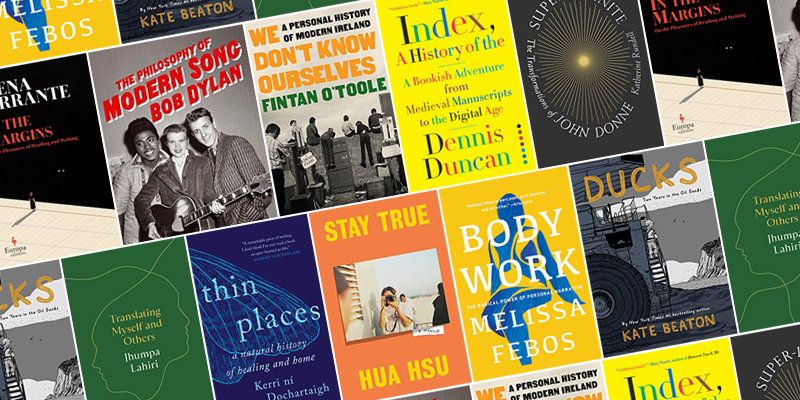 The Best Reviewed Nonfiction of 2022

Yes, using reviews drawn from more than 150 publications, over the next two weeks we’ll be calculating and revealing the most critically-acclaimed books of 2022, in the categories of (deep breath): Fiction; Nonfiction; Memoir and Biography; Sci-Fi, Fantasy, and Horror; Short Story Collections; Essay Collections; Poetry; Mystery and Crime; Graphic Literature; and Literature in Translation.

1. In the Margins: On the Pleasures of Reading and Writing by Elena Ferrante, trans. by Ann Goldstein
(Europa)

“The lucid, well-formed essays that make up In the Margins are written in an equally captivating voice … Although a slim collection, there is more than enough meat here to nourish both the common reader and the Ferrante aficionado … Every essay here is a blend of deep thought, rigorous analysis and graceful prose. We occasionally get the odd glimpse of the author…but mainly the focus is on the nuts and bolts of writing and Ferrante’s practice of her craft. The essays are at their most rewarding when Ferrante discusses the origins of her books, in particular the celebrated Neapolitan Novels, and the multifaceted heroines that power them … These essays might not bring us any closer to finding out who Ferrante really is. Instead, though, they provide valuable insight into how she developed as a writer and how she works her magic.”

2. Index, A History of the: A Bookish Adventure from Medieval Manuscripts to the Digital Age by Dennis Duncan
(W. W. Norton)

“The cleverly punctuated title of Dennis Duncan’s book, Index, A History of the, should signal that this isn’t a dry account of a small cogwheel in the publishing machine. Instead, it is an engaging tale of the long search for the quickest way to find what you need in those big, information-rich things called books. It is indeed an adventure, and ‘bookish’ in the most appealing sense … Duncan goes into fascinating detail about all this—page numbers get an entire chapter of their own—with digressions into curious byways of booklore and literature … From ancient Egypt to Silicon Valley, Duncan is an ideal tour guide: witty, engaging, knowledgeable and a fount of diverting anecdotes. The book skews toward the literary, but anyone interested in the 2,200-year journey to quickly find what one needs in a book will be enlightened, and will never again take an index for granted. The well-designed book also includes nearly 40 illustrations. As might be expected, the index—created not by the author but by Paula Clarke Bain—is magnificent.”

“One of the many triumphs of Fintan O’Toole’s We Don’t Know Ourselves is that he manages to find a form that accommodates the spectacular changes that have occurred in Ireland over the past six decades, which happens to be his life span … it is not a memoir, nor is it an absolute history, nor is it entirely a personal reflection or a crepuscular credo. It is, in fact, all of these things helixed together: his life, his country, his thoughts, his misgivings, his anger, his pride, his doubt, all of them belonging, eventually, to us … O’Toole, an agile cultural commentator, considers himself to be a representative of the blank slate on which the experiment of change was undertaken, but it’s a tribute to him that he maintains his humility, his sharpness and his enlightened distrust …

O’Toole writes brilliantly and compellingly of the dark times, but he is graceful enough to know that there is humor and light in the cracks. There is a touch of Eduardo Galeano in the way he can settle on a telling phrase … But the real accomplishment of this book is that it achieves a conscious form of history-telling, a personal hybrid that feels distinctly honest and humble at the same time. O’Toole has not invented the form, but he comes close to perfecting it. He embraces the contradictions and the confusion. In the process, he weaves the flag rather than waving it.”

4. Super-Infinite: The Transformations of John Donne by Katherine Rundell
(Farrar, Straus and Giroux)

“Rundell is right that Donne…must never be forgotten, and she is the ideal person to evangelise him for our age. She shares his linguistic dexterity, his pleasure in what TS Eliot called ‘felt thought’, his ability to bestow physicality on the abstract … It’s a biography filled with gaps and Rundell brings a zest for imaginative speculation to these. We know so little about Donne’s wife, but Rundell brings her alive as never before … Rundell confronts the difficult issue of Donne’s misogyny head-on … This is a determinedly deft book, and I would have liked it to billow a little more, making room for more extensive readings of the poems and larger arguments about the Renaissance. But if there is an overarching argument, then it’s about Donne as an ‘infinity merchant’ … To read Donne is to grapple with a vision of the eternal that is startlingly reinvented in the here and now, and Rundell captures this vision alive in all its power, eloquence and strangeness”

“Can the Irish border be described as a ‘thin place’? Never have I read such an eloquent description for the omnipresent border in our psyche … Readers will draw their own meaning from Ní Dochartaigh’s words, and she allows space for them to ponder … This debut is not a memoir in the traditional sense; nor is it simply a polemic about the sectarian violence that tore through the author’s childhood in Derry; instead, it combines both of these elements under the insistent gaze of the poet-writer who is always keen to draw our attention to nature … Readers may be surprised at the depths that Thin Places explores. Do not mistake its appreciation of the natural world for anything twee or solely comforting … This is not for the faint-hearted …

Ní Dochartaigh’s writing is generous and she leaves little for the reader to surmise in those dark days she describes in startling detail … The darkness in her subject matter lends itself to the light, however. The natural world at large is a balm for her … It might sound incongruous to write about the beauty of the whooper swan and the enduring effect of Troubles in the same paragraph, but Ní Dochartaigh’s manages it … This is a book full of hope found in dark places and it confronts some of the realities of the Irish border and the enduring effect it has on our lives.”

6. Translating Myself and Others by Jhumpa Lahiri
(Princeton University Press)

“Lahiri mixes detailed explorations of craft with broader reflections on her own artistic life, as well as the ‘essential aesthetic and political mission’ of translation. She is excellent in all three modes—so excellent, in fact, that I, a translator myself, could barely read this book. I kept putting it aside, compelled by Lahiri’s writing to go sit at my desk and translate … One of Lahiri’s great gifts as an essayist is her ability to braid multiple ways of thinking together, often in startling ways … a reminder, no matter your relationship to translation, of how alive language itself can be. In her essays as in her fiction, Lahiri is a writer of great, quiet elegance; her sentences seem simple even when they’re complex. Their beauty and clarity alone would be enough to wake readers up. ‘Look,’ her essays seem to say: Look how much there is for us to wake up to.”

“It could hardly be more different in tone from [Beaton’s] popular larky strip Hark! A Vagrant … Yes, it’s funny at moments; Beaton’s low-key wryness is present and correct, and her drawings of people are as charming and as expressive as ever. But its mood overall is deeply melancholic. Her story, which runs to more than 400 pages, encompasses not only such thorny matters as social class and environmental destruction; it may be the best book I have ever read about sexual harassment … There are some gorgeous drawings in Ducks of the snow and the starry sky at night. But the human terrain, in her hands, is never only black and white … And it’s this that gives her story not only its richness and depth, but also its astonishing grace. Life is complex, she tell us, quietly, and we are all in it together; each one of us is only trying to survive. What a difficult, gorgeous and abidingly humane book. It really does deserve to win all the prizes.”

8. The Philosophy of Modern Song by Bob Dylan
(Simon & Schuster)

“… quietly wrenching … To say that this book is about grief or coming-of-age doesn’t quite do it justice; nor is it mainly about being Asian American, even though there are glimmers of that too. Hsu captures the past by conveying both its mood and specificity … This is a memoir that gathers power through accretion—all those moments and gestures that constitute experience, the bits and pieces that coalesce into a life … Hsu is a subtle writer, not a showy one; the joy of Stay True sneaks up on you, and the wry jokes are threaded seamlessly throughout.”

“In her new book, Body Work: The Radical Power of Personal Narrative, memoirist Melissa Febos handily recuperates the art of writing the self from some of the most common biases against it: that the memoir is a lesser form than the novel. That trauma narratives should somehow be over—we’ve had our fill … Febos rejects these belittlements with eloquence … In its hybridity, this book formalizes one of Febos’s central tenets within it: that there is no disentangling craft from the personal, just as there is no disentangling the personal from the political. It’s a memoir of a life indelibly changed by literary practice and the rigorous integrity demanded of it … Febos is an essayist of grace and terrific precision, her sentences meticulously sculpted, her paragraphs shapely and compressed … what’s fresh, of course, is Febos herself, remapping this terrain through her context, her life and writing, her unusual combinations of sources (William H. Gass meets Elissa Washuta, for example), her painstaking exactitude and unflappable sureness—and the new readers she will reach with all of this.”

Our Favorite Lit Hub Stories From 2022 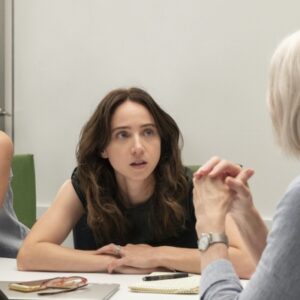 Shortly after the #MeToo movement garnered international traction in 2017, a torrent of films echoing its philosophy began...
© LitHub
Back to top
Loading Comments...