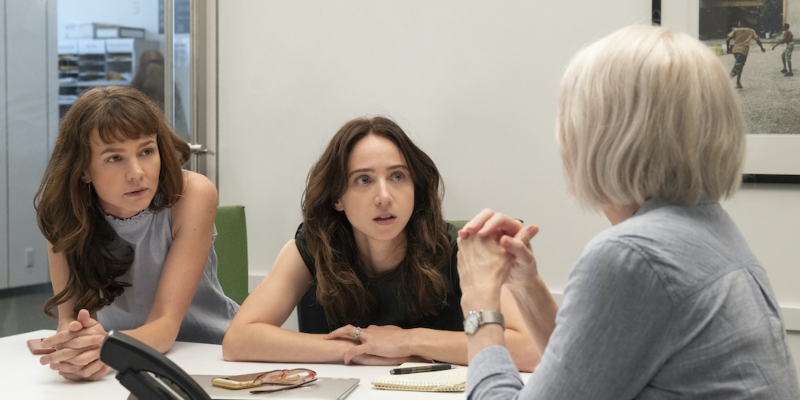 Xandra Ellin on She Said and the #MeToo Cinematic Universe

Shortly after the #MeToo movement garnered international traction in 2017, a torrent of films echoing its philosophy began to proliferate. “The Assistant Is the First Great Me Too Movie,” avowed Vulture in 2020. Also that month, Bombshell was deemed “An audacious film that needs to be watched for nuances of sexism, harassment & #MeToo.” Promising Young Woman followed, a “Thelma and Louise for the #MeToo Era.” Even Ridley Scott’s 2021 period epic The Last Duel was granted #MeToo-movie status by many, despite taking place in the 14th century.

This year alone offered She Said (“A #MeToo Movie Devoid of Sensationalism“), TÁR (an “unconventional take on the #MeToo movement”), and Women Talking ( a “harrowing new #MeToo drama”). The scope of films in the “#MeToo Cinematic Universe” is dizzying, ranging from thriller to biopic, crushing to comedic, sweeping to slice-of-life. A diverse cinematic compendium, all coded via the same signifier.

The irony of reflexively branding these films as #MeToo movies is, of course, that the #MeToo movement (as it’s popularly interpreted) originated in the misogynistic power vacuum of Hollywood itself. And yet, it seems that we’re not asking the obvious question: why are we allowing Hollywood—the movement’s central villain, ostensibly—to codify our cultural conversation around #MeToo?

The relationship between #MeToo and its professed bogeymen—the studio system, celebrity culture, Hollywood as an abstract idea, etc.—is a tempestuous one. Today, filmmakers have license to make a different kind of movie about sexual trauma, one that underscores its ubiquity and enduring psychological impacts. The popularity of #MeToo has created a built-in audience (and profit motive) for the reproduction of these stories—that is, to make a film that in any way reflects the ideology of #MeToo is to create work that is “brave,” work that “meets the moment.” Consequently, in 2022 the #MeToo label is as much a branding mechanism as it is a means of signaling feminist solidarity.

The #MeToo genre perfectly encapsulates Hollywood’s belated, lukewarm, and largely performative endorsement of “popular feminism,” defined by media and communications scholar Sarah Banet-Weiser as feminist doctrine that crops up in “widely visible and accessible” media—particularly within film, music, television, advertising, and social media (Empowered, Duke University Press). Crucially, popular feminism tends to achieve widespread visibility precisely because it declines to infringe upon the status quo. Contemporary popular feminism often operates in an “economy of visibility” wherein, per Banet-Weiser, visibility is the ultimate goal; to be seen is to be free.

As feminism grows increasingly normative, the logic of feminism recalibrates. There’s a far more mainstream understanding that gender inequities a) exist and b) are a problem. But the powerful, writes Banet-Weiser, depend on “already established structures of paternalistic power” to combat a culture of misogyny.

In 2022 the #MeToo label is as much a branding mechanism as it is a means of signaling feminist solidarity.

The economy of visibility is a lynchpin in #MeToo and in its subsidiary cinematic universe. As Eva Cherniavsky writes, #MeToo politics are “exclusively realized in the production of publicity … It is less the means to an end (an incitement for women to organize—to assemble a ‘movement’) than the realization of an end.” #MeToo films, in turn, need only illustrate the injuries of people (cisgender white women, mostly) oppressed by misogyny to secure the coveted feminist label. Within an economy of visibility, making visible the heretofore invisible is liberative.

But as Banet-Weiser notes, “The cultural conditions that made it important to demand visibility in the first place … have shifted in an age of popular feminism… so that the demand looks different.” While representation was once an essential step toward achieving liberation, neoliberal feminism—uninterested in actually upending the social order—neglects to couple “representation” with a sweeping political project.

By subscribing to liberal feminist conventions, filmmakers are able to market their work as a product of the #MeToo moment while sidestepping a serious interrogation of power in their analysis of sexual politics. But this deference to the ideological project of #MeToo alone surely wouldn’t establish such a clear relationship between the films and the movement. The #MeToo Cinematic Universe also serves an industry in urgent need of damage control.

Consider Universal Pictures’ She Said, the latest and perhaps most head-on contribution to the #M2CU. Adapted from the book of the same name, She Said follows New York Times journalists Megan Twoey (played by Carrie Mulligan, a now-mainstay in the genre) and Jodi Kantor (Zoe Kazan) along their painstaking quest to uncover Harvey Weinstein’s pernicious and institutionally sanctioned pattern of sexual abuse.

The All the President’s Men of the genre, She Said is more a film about the business of journalism—calling survivors, arriving at their doorsteps unannounced, the difference between “on the record” and “on background”—than a recapitulation of Weinstein’s crimes. And unlike some early installments in the #MeToo genre, like Promising Young Woman and Bombshell, She Said is clearly committed to telling a conscientious story about survivorship. (The years that She Said‘s creators took to learn from the genre’s more questionable episodes may be to the film’s detriment, if its abysmal early box office numbers are any indication.)

Conscientiousness notwithstanding, She Said doesn’t do enough to grapple with a fundamental problem of the #MeToo genre: that in creating a film about #MeToo, the filmmakers are deliberately working to differentiate themselves from the “villains” of their industry. In the case of She Said, the overwrought praise of Twoey and Kantor for their work belies a lionization of the filmmakers. The audience needs to believe that the people responsible for the film—in telling the story of the journalists who told the story of the survivors who told the story—are themselves performing an act of service.

Abdication of responsibility is the beating heart of the #MeToo Cinematic Universe.

We can’t, for instance, fault Rebecca Lenkiewicz’s screenplay for repeatedly citing Universal’s rival studio Miramax as the proliferator and enabler of Weinstein’s crimes, often using “Miramax” as a euphemism for “abusive workplace.” But surely we can ask what Universal stands to gain from vilifying a rival by name, from carefully extracting themselves from the malfeasance of their broader industry.

The filmmakers cannot be exonerated, though, without the deliberation of a jury—they rely on an audience primed to consume the stories as written. To understand the tone of She Said (somehow at once plodding and histrionically self-important), one has to enter the film with some prior knowledge of the story’s beats and a steadfast belief in the story’s cultural import. The filmmakers have nothing to prove to an audience of news-literate, liberal viewers; the Weinstein saga and the tale of its prolonged unraveling are essentially existing IP.

And so, instead of proposing any serious challenge to power, the film placates: first, its creators—able to meaningfully divorce themselves from the “Hollywood is a corrupt system” narrative they’ve worked to advance—and second, its liberal viewers, eager to revisit a rare progressive victory that will shore up their “faith in humanity.”

Abdication of responsibility is the beating heart of the #MeToo Cinematic Universe—these movies simply don’t translate unless the filmmakers can effectively distinguish themselves (i.e. Hollywood) from those they seek to critique (also Hollywood, but different, just trust us). Heretofore absolved, many of these filmmakers further cut their losses by situating the story of #MeToo squarely in the chronological past. She Said, a biopic that, to be fair, is bound by the cycle of investigative journalism it replicates, seems to suggest that the work of #MeToo was complete when Kantor and Twoey hit “PUBLISH” in the film’s final frame. Likewise, the antifeminists at the center of Fox News’ #MeToo biopic Bombshell are lauded as victorious when Roger Ailes is ousted.

These films have no patience for unfinished business; without a clean resolution, they are insufficient testaments to the filmmakers’ righteousness. One can’t help but read these endings as a reflection of what Hollywood’s top brass believes #MeToo was demanding: not liberation, not a serious institutional realignment, but the expulsion and public shaming of a handful of toxic, wealthy, powerful men.

What does “closure” look like for the #MeToo movement?

Even the #MeToo films that allow for ambiguity (The Assistant director Kitty Green specifically said, “I didn’t want people to think it would all be okay in the end, like … in Bombshell”) presuppose a system of power that is fundamentally misaligned. That is, these films situate all the structural abuse in the hands of one Powerful Man. While the films take righteous pains to note a “system” of malfeasance, they also trade on the myth that the culture of Hollywood would be profoundly different were we to simply ax the rapists at the top.

For now we have: Weinstein was sentenced to life in early 2020, and Roger Ailes died of a subdural hematoma shortly after his ousting. So… we’re square now? Matt Lauer’s ouster led to his divorce and his home in the Hamptons going on the market. Was that justice? Bill Cosby was convicted and quickly released. Are we safer? Instead of addressing the misogyny inherent to the mainstream media’s capitalist project, She Said and the new filmmaking tradition it represents read like self-congratulatory pats on the back for the industry, not promises or even pleas for self-improvement. We erred, they concede, but it’s over. We did what you asked us to. Satisfied?

There is one overarching characteristic that contaminates the #MeToo genre, even its most interesting work: a sense of its own ideological righteousness. Steadfast fealty to the politics of #MeToo safeguards the genre from mainstream critique; to challenge the message (or even just the craftsmanship) of projects like She Said, Bombshell, Promising Young Woman, and The Assistant is to question the usefulness of an economy of visibility, to disrupt the inherent legitimacy of the #MeToo movement as an entire theory of organizing. Such should be evidence, not of the movement’s reach or influence or fundamental probity, but of its vulnerability to capitalist appropriation.

In its current iteration, the #MeToo Cinematic Universe is driven largely by an industry that refuses, for obvious reasons, to seriously confront power. Hollywood doesn’t seem to have the vocabulary, much less the institutional scaffolding, to be anything but indiscriminately deferent to the status quo. The films are hindered, perhaps most apparently, by their obsession with closure—clean narrative resolution allows the entertainment industrial complex to create distance between itself and the misogyny it critiques. But imposing resolution where one doesn’t fit is thorny territory.

In a 2020 interview, Michaela Coel, the creator of HBO’s I May Destroy You, asked Vulture’s Alex Jung: “What does closure look like?” It’s the question that all #MeToo films attempt to answer—most clearly on a narrative level (“What is ‘closure’ for the survivors depicted on screen?”), but also on a more metatextual level. That is: what does “closure” look like for the #MeToo movement? Do we turn the page on it, treating it as an ephemeral artifact of the chronological past, a paragraph in future textbooks? Do we take its lessons literally, telling stories that mirror its ideology to the letter? Or, more optimistically, will we situate it as just the beginning of a much longer, more painful reckoning?

Xandra Ellin is a Brooklyn, NY based writer and podcast producer at Pineapple Street Studios, where she's worked on shows like The C-Word, Back Issue, and Because of Anita. She was formerly the head writer of a weekly newsletter distributed by WNYC Studios' On the Media.

The Best Reviewed Nonfiction of 2022 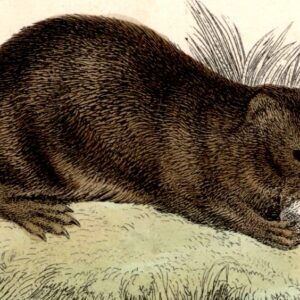 I think there is an element of the sacred in the beaver, if only in its deep weirdness. One million years ago, beavers the size...
© LitHub
Back to top