"A sex scene should advance a story."

The following is excerpted from Melissa Febos’ Body Work: The Radical Power of Personal Narrative and appeared in Lit Hub’s Craft of Writing newsletter—sign up here.

Recently, I began a weekend creative writing workshop with this exercise: write your sexual life story in five sentences. Short of gratuitous usage of semicolons, there was no wrong way to do this; the five-sentence story could be as abstract or as concrete as my students wanted. It could be a chronological list of the five most high-topography sexual events in their lives, or it could be a list of images more akin to a surrealist poem. After the allotted five minutes, they all set their pens down with a touch of weary accomplishment. Then I asked them to do it again.

This request was met with stares, some uncomprehending, some with a touch of contempt. I pressed on. The only requirement was that they not reiterate any of the previous five sentences—they could zoom in to a single event, zoom out to a philosophical summary, make it silly, make it emotionally opposite, make it more honest, make it less or more abstract. After they’d finished, I asked them to do it for a third time. A fourth. At this point, many of their stares implied that I was unhinged, sadistic, or simply ridiculous. Eventually they stopped staring and started writing faster. Here’s the point: Their writing got better. It became truer. It became more theirs. I told them, We could do this all day. I meant: and not run out of ways to tell that story. More importantly, they would bear witness to something greater than mere improvement.

Over the years, I’ve come to look forward to the point in my own writing at which continuing seems both incomprehensible and loathsome. That resistance, rather than marking the dead end of the day’s words, marks the beginning of the truly interesting part. That resistance is a kind of imaginative prophylactic, a barrier between me and a new idea. It is the end of the ideas that I already had when I came to the page—the exhaustion of narrative threads that were previously sewn into me by sources of varying nefariousness or innocuity. It is on the other side of that threshold that the truly creative awaits me, where I might make something that did not already exist. I just have to punch through that false wall.

I recently wrote a whole book about how I learned to discern and expunge the patriarchal narratives that were embedded in my consciousness. To the extent that it has been possible, that mission has inestimably improved my sexual life as well as my writing about sex. The most meaningful way to awaken to any truer story of your own life is to surround yourself with people and works of art that are also interested in this project. It has also turned out that, for me, writing itself is a primary means of liberating my own mind.

My whole practical thesis around the craft of writing a sex scene is this: it is exactly the same as any other scene.

A memoir is a diorama of experience, populated only partially with the memories we carry to the desk. Part of the work of writing it is that of completing that diorama with many of the memories and experiences that we did not have access to during the events that we describe. In order to write a memoir worth reading, I had to recover all my disgust, arousal, humiliation, and fear during my years as a professional dominatrix. I had to discover what I had felt even when it had been obscured by heroin. In this way, I was able to describe my role in the theater of types and the person I was beneath the mask.

When something seems difficult, in writing and in life, we tend to make rules around it. We like to assign the trouble we have to the thing that troubles us. It is not we who struggle with sex scenes, but sex scenes themselves that are a struggle, that need to be governed by rules. It is also easier to control who writes sex scenes when there are copious rules for how to do so. But not everyone is equally inclined to follow rules, or punished with equal ease for a failure to do so.

When it comes to sex scenes, the rules say things like: Don’t write them at all, and if you do, don’t use these words. Don’t write them silly, porny, dramatic, tragic, pathological, grim, or ridiculous.

My whole practical thesis around the craft of writing a sex scene is this: it is exactly the same as any other scene. Our isolation of sex from other kinds of scenes is not indicative of sex’s difference, but the difference in our relationship to sex. It is our reluctance to name things, the shame we’ve been taught, our fraught compulsion to enact a theater of types. It is indicative of the lack of imagination that centuries of patriarchy and white supremacy has wrought on us.

I believe it’s possible to retrain the mind to write more creatively and truthfully and smartly about sex.

To teach sex scenes is to talk about plot, dialogue, pacing, description, and characterization: all those elements that make a captivating scene. A sex scene should advance a story and occur in a chain of causality that springs from your characters’ choices. It should employ sensory detail that concretizes and also speaks symbolically to the deeper content of the story. Or if not, it should service your work of art in whatever ways you want from your scenes. Though I am happy to talk about scene building anytime, that’s also not how I want to spend the rest of this chapter.

The harder work of writing sex scenes is undoing your own mind’s preconceptions about writing sex. Being given rules about a thing can shape your mind. Think of Foucault in Discipline and Punish: the Birth of the Prison, writing about the panopticon—the prison model predicated on surveillance that used the internalized eye of the state to control its prisoners: “discipline produces subjected and practiced bodies, ‘docile’ bodies.” The examples for this are probably infinite, but take for instance the way I related to my own body for the majority of my life, how it was determined by the rules I was given for how it should look. I spent years monitoring and punishing my own body for being something it was not supposed to be. One of the ways that I undid that conditioning was by habituating myself to other ways of thinking. For years now, I have ended my daily morning journal entry with the sentence: Today, I reject the patriarchy’s bad ideas. It’s a needed reminder that when I start to feel bad about my body or laughing too loud in a restaurant or start to wonder if I should shave my armpits, those are not my ideas. I like my body, laughing loudly in restaurants, and my soft armpit hair.

Sometimes the best way to unlearn something is by simply cultivating defiance toward those unchosen rules. Willful, opposite action can counteract their habitual governance of your writing and thinking. This is the logic undergirding the concept of affirmations and a whole genre of self-help books. I believe it’s possible to retrain the mind to write more creatively and truthfully and smartly about sex, just as it was possible for me to train my writing out of the bad habits of mixed metaphors, passive voice, superfluous modifiers, and a total lack of narrative tension. As an added benefit, I believe that doing so will simultaneously train your mind out of relying on those internalized narratives and habituate you to thinking more creatively and truthfully and smartly about sex. 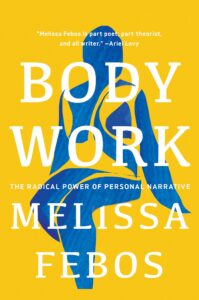 Excerpted from Body Work: The Radical Power of Personal Narrative by Melissa Febos, published by Catapult.

Melissa Febos is the author of Whip Smart, Abandon Me, and the essay collection, Girlhood, which will be released on March 30. She welcomes recommendations for well-written, feminist, antiracist, and queer-centering mysteries. You can find her on Twitter @melissafebos and melissafebos.com.
http://melissafebos.com 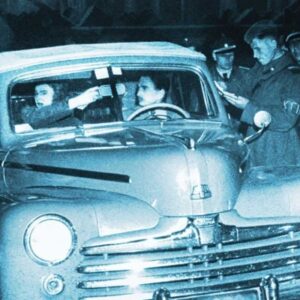