Gayl Jones, the highly acclaimed author who was first “discovered” and mentored by Toni Morrison, has twice disappeared from our sight. The first time was after a stellar launch as one of America’s most daring and distinctive literary lights, after two brilliant novels (Corregidora and Eva’s Man) brought out by Morrison at Random House, and one slim but oh-so-astonishing story collection (White Rat), when she went into a self-imposed exile in France, from the late 1970s until the late 1990s.

She and her husband had rejected the racism that surrounded them, and Gayl had made the decision to leave her job in academia and her very promising career as a writer, as well as her friends and supporters in the literary community, and live in Europe.

I was very, very lucky that in 1997, less than two years after I had stepped into the job of director of Beacon Press, Gayl contacted me. She had not been in touch with anyone in US publishing and wasn’t planning on showing me or anyone else new work at the time; in fact, she was asking me to take her two novels out of print (they had been added to Beacon’s visionary series Black Women Writers in the 1980s, after briefly falling out of print). She didn’t want those two books to be her only novels in print, she said, since they both presented negative portraits of Black male characters.

I understood that, but, on the other hand, I shared the perspective of so much of the literary community: these were canonical works of American literature, not just of women’s literature or Black literature. As Toni Morrison had said when she published Corregidora, no novel about any Black woman could ever be the same after that book—and of course she included her own. Above all, I loved and valued these books, and I couldn’t imagine Beacon or the entire culture losing them.

I panicked just a little bit, and then proposed to Gayl that instead she give me new work to publish, work that would present a different lens on Black men. I didn’t really think she would agree to this.

To my great surprise, she answered quickly by sending me the manuscript for her novel The Healing. And shortly after that, before we could even publish The Healing (which we did, to great acclaim; it was a National Book Award finalist), she sent me a long manuscript for a book called Mosquito and a book-length poem, Song for Anninho. We published everything she sent, with great pride, and the acclaim just kept pouring in. The central figures in these books were strong, passionate Black women, but they also presented portraits of intelligent, sensitive men.

Then Gayl’s husband died, and she disappeared a second time, and again for almost two decades. Her phone number and email disappeared too, but over those years, I continued to mail letters to her (and of course we sent royalty checks!). I never quite gave up hope that she would someday reply, and after many years, she began sending very brief replies, handwritten. The thaw began in earnest when I sent her back the last manuscript she had sent to me, just before her second disappearance, the monumental Palmares. I had also had a scan made for her, and asked her in another of my handwritten notes, for the fourth or fifth time, to consider letting us publish it. The problem was that my copy was missing almost 100 pages from the middle of the 1,000-page original.

Gayl apparently had an old computer, with very limited memory. She began rekeying and revising the manuscript, but the machine kept running out of memory, so she sent off “parts” to various services that would store the files and ended up with seven “volumes,” which she would send to me one by one. By the time she got to the fourth volume, I was able to persuade her—again by US mail—to let us publish the book. We signed it up, I made some minor editorial suggestions, and we published Palmares in the fall of 2021, once again to great—honestly, even greater—acclaim, and this one was a finalist for the Pulitzer.

In the interval, Gayl began sending me other manuscripts, a total of five others, which we have been publishing one by one as we finalize edits, designs, and roll them off the press. Beacon is about to launch The Birdcatcher, which Publishers Weekly just hailed with these words in a starred review: “Jones continues her marvelous run after last year’s Pulitzer finalist Palmares with the gloriously demented story of an artist who keeps trying to kill her husband,” and which the great minds at Powell’s have declared a “Pick of the Month.” Here Gayl shifts from 17th-century Brazil to 20th-century Ibiza (and various US cities) for a very modern account of Black Americans in exile.

I find that each of Gayl’s books offers such a different and engrossing experience, and I value each one so much and recommend each one to you, but if you haven’t read Gayl’s work before, The Birdcatcher is a very good place to start. And we have a spectacular collection of short fiction coming this spring called Butter and another novel, one narrated by a male character, next fall called The Unicorn Woman. Wherever you start in your Gayl Jones discovery journey, I hope you’ll discover all the gifts of her work and relish them each and every bit as much as I do.

Helene Atwan was the Director of Beacon Press, an independent non-profit book publisher founded in 1854, from 1996 to 2022. She began her publishing career in 1976 at Random House in New York, before moving to Alfred A. Knopf in 1977. She then joined The Viking Press in 1979. In 1981, she moved to Farrar, Straus and Giroux, where she became a vice president of the house in 1987 and the associate publisher in 1991. In 1993, she joined the Pocket Books division of Simon & Schuster as a vice president and director of marketing. She was appointed director of Beacon Press by the board of trustees of the Unitarian Universalists Association in October of 1995.   Atwan received her B.A. from the University of South Carolina summa cum laude and Phi Beta Kappa. She went on to receive her M.A. in English Literature at the University of Virginia.   As Director of Beacon Press, Atwan has personally acquired many books, including Reimagining Equality by Anita Hill, Black Prophetic Fire by Cornel West, The Tyranny of the Meritocracy by Lani Guinier, ten volumes of poetry and two audio books by Mary Oliver, winner of both the National Book Award and the Pulitzer Prize as well as books by the acclaimed Black Arts Movement legend Sonia Sanchez. Her work with Gayl Jones, a National Book Award and Pulitzer Prize finalist, includes The Healing, Mosquito, Song for Almeyda & Song for Anninho, Palmares, The Birdcatcher and the forthcoming titles Butter and The Unicorn Woman. 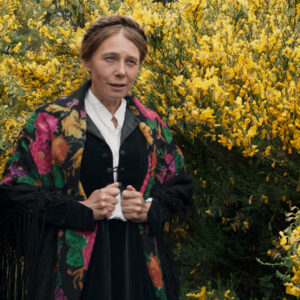 Frederick Wiseman's new film, Un Couple, is a daring cinematic experiment: an hour-long monologue that attempts to provide...
© LitHub
Back to top