The Beginning or the End? Writers on the Age of Trump

On the Eve of the Election, Which America Are We?

Writing is a political act. The idea that literature can (or should) be considered wholly separate from earthly concerns of justice and suffering diminishes both art and the life it depicts. If the moral arc of the universe indeed bends toward justice, it needs some help along the way. And so we look to our storytellers, Shelley’s “unacknowledged legislators of the world” for wisdom and alarm, a way of seeing what we need to see. The last 18 months have revealed depths of division, mistrust, and rancor far darker than a very many of us thought possible in America, in 2016. So regardless of who wins tomorrow, there is much to consider, to talk about, to fix. These essays and conversations stand as both a measure of the temperature and a consideration of the climate; and, perhaps more simply, more importantly, are a way to just keep talking, whatever comes tomorrow, lest silence lead to anger.

“I don’t want my family falling apart over this nightmare.”
Mira Jacob and Emily Raboteau talk raising children of color in Trump’s America.

“A part of me—the part that has embraced America as my new home—
has been crushed.”
Nicole Dennis-Benn on voting as an immigrant.

“The actual moment of marking a ballot is the only true secret left in our lives.”
Susan Straight on driving 3,000 miles to vote.

“Without persistent vigilance, unbridled bigotry will rise again.”
Pamela Newkirk on the myth of a post-racial America.

“Having Trump running for president is like constantly being harassed
on my way to work.”
Lauren Elkin on Donald Trump, anti-flaneur.

“He was blood dumped into a scrying pool.”
Maurice Carlos Ruffin on talking Trump in New Orleans.

“It’s unclear how he’s endeared himself, with his anus face and cheap-baby-doll hair.”
Kera Bolonik and Kate Tuttle on the limits of satire in an age of Trump.

“Democrats and Republicans are screaming apocalypse, and the rhetoric is so inflamed that at times it can be hard to see the flames for the smoke. Where to look?”
Ten literary takes on all our possible post-election apocalypses. 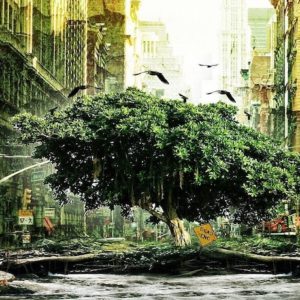 At this point in the election cycle, both Democrats and Republicans are screaming apocalypse, and the rhetoric is so inflamed...
© LitHub
Back to top
Loading Comments...