Nicole Dennis-Benn on Citizenship and the Power of the Vote

It was a cool November morning in 2008 when I walked out of my Brooklyn apartment to vote for the first time. The sun blazed through half-naked tree branches, emphasizing the red and orange hues of the leaves. There was a time in Jamaica when my parents had to warn my siblings and me of the dangers of going outside on Election Day. For a long time, I could not bring myself to wear orange or green, the affiliate colors of the two political parties in Jamaica, because of the violence one’s choice could invite in the pressure-cooked lanes of Kingston where we lived. Not many people in my community voted because of that.

But the past quickly faded on my walk to the polling place in my new Brooklyn neighborhood. The line of brownstones on my block seemed to go on for eternity, ceremonious in the way they stood. Like guards at Buckingham Palace, indifferent and stricken. Just a year before, I had walked out of a courthouse in Downtown Brooklyn with a paper that said Certificate of Naturalization. Exercise your rights as US citizens and vote, the official had said to me and a room full of immigrants after we pressed our right hand to the left side of our chest and renounced our native countries. I looked around the room then at all the smiles that mirrored my own.

That cool day in November, as leaves turned, so did my understanding of what it really meant to be an American citizen. The process felt more like my first time visiting a church. I was ushered into a public school by old African-American ladies, who called me sweetheart and baby. They made sure I was at the right site and didn’t mind my Jamaican accent when I told them my name and address. Say that for me again, baby? They walked me through the process, made sure I shaded the circles on the ballot. In no time it was over. I got a sticker that read, “I voted.” Stunned at how easy it was, I floated back home, proudly displaying my sticker. Later that night I learned that my vote counted. I voted for the first Black president, which made me a part of that history, too.

However, in 2016 I’ve been listening to the debates, trying hard to muster the same enthusiasm I had eight years before Donald Trump began referring to immigrants as “Criminal Aliens.” A part of me—the part that has embraced America as my new home—has been crushed. It’s apparent now, more than ever, that I am a visitor, a house guest, expected to step lightly, bow my head, and pretend as though what goes on doesn’t affect me. I am led to believe that no matter what I do, I will be regarded as an alien. Ask Khizr and Ghazala Khan, the parents of a Muslim soldier, Humayun Khan, who valiantly fought and died in Iraq. Mr. Khizr Khan moved me to tears during his speech at the 2016 Democratic National Convention when he pulled out a booklet with the US Constitution—one we were made aware of as new Americans when we received citizenship in the United States; one we were told to refer to in order to know the laws and abide by them; one we took solace in when we were given our rights. For no longer did our documents say “Alien,” but “Citizen.”

This country, with its promise of a dream on the summer night in 1999 when I first arrived from Jamaica with a yearning, now feels like a battleground with chants like “Make America Great Again.” I am living the dream as a published author, with my first novel making mainstream reviewers’ lists, including the New York Times’. Yet, something dark looms over my head the more I hear those chants and Trump’s lament about “Criminal Aliens.” Had it not been for those “Criminal Aliens,” I would not be here.

My father came to America undocumented, working two jobs—one was building pools, the other was as a taxi driver—none with benefits. He tried to get work in accounting, but was told that since his credentials were received in Jamaica, he had to start all over again. When he first wrote home to tell us he was alright, we pictured him in the America we saw on television, where everyone had a lawn with a white picket fence. But when I arrived at my father’s home, he had neither lawn nor backyard. His tall apartment building was right next door to a strip mall that housed convenience stores, a laundromat, a liquor store, a beauty supply shop, and a Chinese restaurant. Though it might have appeared grim, with brown bricks and small windows crowded with window-guards arranged like burglar bars, the colorfulness of the neighbors—their languages (Spanish, Haitian creole, Jamaican patois), their music, the fragrance of the aromatic spices in their foods—made the building feel like a haven for difference.

It was an America I did not expect. It was an America where different languages were spoken in one building, one neighborhood. And it was from this neighborhood, and neighborhoods like this one, where people like my father would rise to internal clocks on just two-hours of sleep before the break of dawn to go to work. They all knew that the second generation would eventually thrive off their hard work, so they got up to scrub floors, mother other people’s children, clean toilets, lay bricks without helmets or health insurance, help build towers, cook in restaurant kitchens, deliver food on bicycles through pouring rain and blizzards, drive taxis, and sweep train stations.

All of these so-called “Criminal Aliens” were driven by ambition, a secret prize that incited them to leave the financial and social constrictions of their home countries with absolute certainty that their children would survive, would do better than them. So, while the rest of America slept, these people shuffled to jobs that regarded them as disposable. But to give up would have been an embarrassment, and a greater cost—a child’s tuition back home, an ailing mother’s funeral arrangement, a brother’s hospital bill—so they kept on working.

It took me years to realize the nature of his sacrifice, the courage in coming to a new country to start over for the sake of his family. Because of him, America was easier to navigate. Because of him, I got my citizenship, two Master’s degrees, and the ability to vote for America’s first Black president. Because of him, I have the luxury of calling myself a writer. Now, an established author. These days I watch second-generation teenagers hop inside cars, music on blast, to blur out their parents’ accented warnings, Be careful! Like a younger me, those teenagers probably resent these people they think have no clout in the America we see on television; Trump’s America, devoid of people of color and other cultures. “Make America great again!” He chants over the bowed heads of people who have taken on lives of servitude, fading out of their children’s lives. I would later understand that these hard-working people help to build America, and appreciate that though I am more privileged because of them, I am one of them. If only Trump and his followers knew how much these people sacrificed. If only he acknowledged that their cheap labor helps fuel the American economy.

It’s now nine years since I walked out of that courthouse in Brooklyn. I reflect on the smiles I saw in the room full of new Americans. Now, I imagine the muscles of faces tightening, a movement of blood under skin as emotions rise like heat from pores and veil eyes with wetness. I put my right hand across my chest. I secretly thank my father and all the so-called “Criminal Aliens” who made it possible. America is already great because of them.

Nicole Dennis-Benn is the author of the acclaimed debut novel, Here Comes the Sun (Norton/Liveright, July 2016), a New York Times Editors' Choice. Dennis-Benn has also been shortlisted for the 2016 Center for Fiction First Novel Prize. Her work has appeared in The New York Times, ELLE Magazine, Electric Literature, Lenny Letter, Catapult, Red Rock Review, Kweli Literary Journal, Mosaic, Ebony, and The Feminist Wire. Dennis-Benn has an MFA in Creative Writing from Sarah Lawrence College and has been awarded fellowships from MacDowell Colony, Hedgebrook, Lambda, Barbara Deming Memorial Fund, Hurston/Wright, and Sewanee Writers' Conference. Dennis-Benn was born and raised in Kingston, Jamaica. She lives with her wife in Brooklyn, New York. 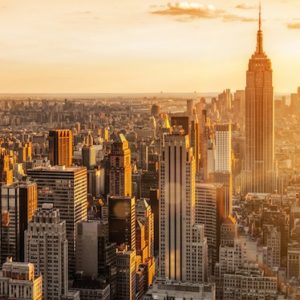 Walking down the rue Saint-Maur a week before the US presidential election, engrossed in the Facebook app on my iPhone, I nearly...
© LitHub
Back to top