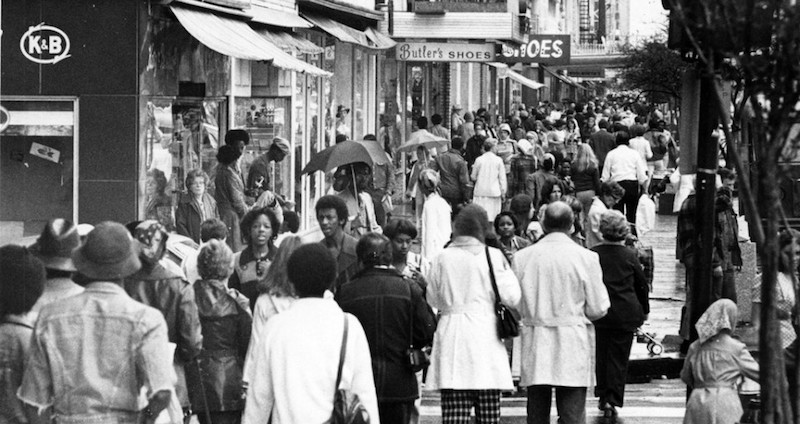 Talking in New Orleans in the Age of Trump

What Real America Helped Us Understand

In New Orleans, where we came from, we had a saying: “we making.” This was a utility phrase, a conversational Swiss Army knife. Instead of saying we were at the supermarket purchasing food, we often said “we making groceries.” In other cities, if a person inquired about your family, you might respond, “fine,” a paradoxical reply because it contained no content. But in New Orleans we sometimes responded, “we making.” We making meant you were okay. Not perfect. But striving to perfect your life. This exchange was related to Louis Armstrong’s idea that friend’s shaking hands and saying “how do you do” was semaphore for “I love you.” Our inner city chit chat was small talk with large implications. It implied an innate humanity and the capacity for empathy.

But in Trump’s America we soon discovered we had lost our humanity. We lost the ability to tell our stories, and, yes, we lost our bodies, too. We learned we were the other, and the other was a shadow of yesterday, a past best buried under desecrated ground. Don’t get us wrong. It wasn’t Trump who destroyed our bodies or our language. As it turned out, we never had them. We all knew our ancestors were boxed up and shipped from an African coast. We were drug from South Carolina and placed on a block with mules and fine dining china. Eventually, we were told we had a three-fifth’s vote. But this was an accounting trick. We couldn’t vote. The Three-Fifth’s Compromise, which was spoken into existence during the same discussions that created the Constitution, simply explained that if you owned one of us then you had your vote and then some. And if you owned bunch of us, you were a boss.

Trump was an antidote to all the myths we told ourselves about the moral arc of the universe bending toward justice. He was blood dumped into a scrying pool. Clarity produced by anger. “I’m very angry,” he said. He was the “law and order” candidate, the “blue lives matter” candidate, the “and I suppose some of those Mexicans are good people” candidate. Our antennae went up he said that part about the Mexicans. Because we were often called criminals and rapists, too. But occasionally a white person said some of us were good people.

Trump wanted to protect the good people so he reached back to the consecrated past. When Lyndon B. Johnson pushed for Civil Rights over State’s Rights, he won the Democrats the African American vote for half a century. But President Nixon countered with law and order and won the white supremacists, of which the nation had a few. These Americans—not monsters, reprobates, or even deplorables—loved Nixon because America did just fine under the principles it was founded upon, exclusion of the other and the taking of that to which it felt entitled.

Many Americans said the push for civil rights was a world turned on its head. It was mass hysteria, cats and dogs living together, fire and brimstone bubbling up from your morning coffee. Law and order was a concept real Americans could believe in. Trump imported these words into his campaign like so many undocumented workers to his properties. Law and order implied a cop on every corner to profile every brown-skinned person and keep them in their places. It implied frat houses where boys could grope women unmolested. Law and order meant hard-working Americans could step back onto Main Street and Make America Great Again.

Back home in the inner city of New Orleans, we had a way of greeting ourselves. “How ya mama and ‘nem?” It might have come from the hard-working Americans who dominated the city in the middle of the 20th century. When white flight happened, those folks threw off their hyphenated names. They ceased being Italian-, Irish-, or German-. They moved to the suburbs and became white as a blank page, a page for writing their Real American stories. But those ethnics left that lovely question, “how ya mama and ‘nem” in our city. We took it up because we were good at repurposing castaway things. After all, we were the ones who created hip-hop, an art form that constantly reached back and sampled the musical past. We used “how ya mama and ‘nem?” even into the Age of Trump. It was yet another way to shake hands, another way to say, “I love you.” We asked the question and we all laughed because we didn’t necessarily want to know how our mamas were. We just wanted to make ourselves smile.

This was improper because as Trump explained to his fellow Americans, there was no love in the inner city. The inner city was hell, he said. We knew he was right because we once lived in the old inner city before Trump made it great. Every day we walked out of our doors with our daughters or our sons or alone because we had no children but we had our pregnant hopes. Every day we were shot and killed. We all died. How did we know this? Because we watched Boyz in the Hood, Set It Off, Hustle and Flow, Fruitvale Station. We watched Fox News, CNN, and YouTube. We watched Trump, too.

But Trump said he loved us more than anyone in history. He even owned one of us. “Look at my African-American over here,” he said, pointing. This wasn’t shocking because everyone already knew America owned us. We were not Real Americans. We were hyphenated-Americans, and we needed a Real American to show us how to live as our forefather-owners intended.

Trump taught us euphemisms were a waste of time. He urged us to stop denying what we all knew to be true. While “hard-working Americans” was code for white people. “Urban” meant “black.” “The blacks” meant “the others.” “African” meant “criminal.” Logically, Trump implied, we were Criminal-Americans. Real America cheered when they heard this. Real America had been afraid to say any of this because Real America was afraid of being called racist. Saying racist things and doing racist things did not make you a racist, Trump, Real America’s anger translator, said. Real America shouted, “USA!”

Real Americans were well-educated white women who knuckled their bodies against elevator walls when we crawled in. Real Americans had every right to label us with a “C” for colored and keep us out of their apartment complexes. Real Americans wanted to yank us from the body politic like a rotten tooth. We had caused so much pain to Real America for such a very long time. Trump brought pliers as well as whiskey to dull the ache.

We were wrong about Trump. The 90 percent of us who voted against him were misguided and ill-informed. We saw him as an object is perceived through the wrong end of a telescope. He was outrageous—a bigot!—we thought. But Trump wasn’t far away. Like Michael Myers or Freddy Krueger, he was right behind us the whole time. He was next to us. He was in front of us. We were surrounded, because he was in the hearts and minds of people we called friends. He was even inside of people we loved.

We were appalled by Trump’s words, which confused us. We thought it was the language of hate. When Trump said he wanted to “ban all Muslims” from our shores because he saw thousands of them cheering the Twin Towers’ destruction, the hairs on the back of our necks shouldn’t have stood up. We shouldn’t have seen ourselves falsely accused of rapes or thefts or side eye and strung up, under mob rule, to tree branches 3,446 times. Our imaginations were getting the best of us. After all, we were, according to Real America, a superstitious people.

We were fools to believe the Statue of Liberty welcomed tired huddled masses. She never welcomed us. She delivered us from the heart of darkness and demanded we work for free. But supposedly she never asked for the Mexican farm workers who put tomatoes on American tables or the Hondurans who rebuilt so much of New Orleans or the Syrian women and children who had been flushed out of their homes by a proxy war between Real America and the Russian Bear. Lady Liberty never asked for these people. After all, Lady Liberty was white and Christian. Just like Jesus. She had a right of first refusal, a right of Manifest Destiny that predated even the Native Americans who kept this land warm until Christopher Columbus discovered it and Real Americans civilized it with long rifles and small pox.

These were the lessons Trump taught us about ourselves. Even if Trump wasn’t a evangelical Christian, he understood the teachings of Jesus: when your American plane is going down, you put on your own American mask first, you secure your own American future. America was a shining city on a hill. But it was time to pull up the drawbridge and post heavily armed men on the battlements.

We had a habit in New Orleans of calling each other “baby.” It wasn’t unique to New Orleans, but we said it more than most. This was speech as disarmament. When we were approached on the street by a Criminal-American woman shilling homemade brownies, we wanted to say no. Who would buy dessert from a street person? Besides, we ate too much sugar already and, we couldn’t afford to spend the money. We were from the inner city, as Trump reminded us, and we were all broke. But when that woman called us baby, it was impossible to dismiss such kindness out of hand. Calling us baby was her way of starting a conversation with a little love, a dollop of respect.

But there was one thing we did not clearly understand until the Age of Trump: we Criminal-Americans were supposed to be ashamed of ourselves. Because the inner city was hell, because we spent all our time killing each other, and because we had nothing to lose, we needed to once and for all understand that we were not great. The products of our community—the music of Chuck Berry and Beyonce, the antics of Baby Esther, the words of Dr. King, the actions of Rosa Parks, the journalism of Ida B. Wells, the fearlessness of Serena Williams, Shirley Chisholm, Michelle Obama—did not belong to us because our bodies did not belong to us. Our creations belonged to Real America. Let Elvis play our rhythm and blues. Let the alt-right use Dr. King’s words to justify police shootings of unarmed black men. Let Caroline Wozniacki parody Serena’s body because after all Serena’s body didn’t belong to her.

We had arrived in the Age of Trump who had come to give us a gift better than language, love, or self-possession. He would speak for us and say aloud what everyone knew to be true. 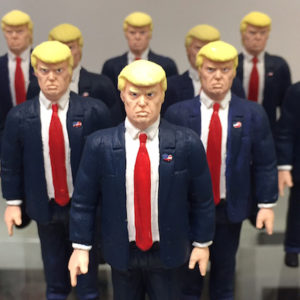 Writers Mira Jacob and Emily Raboteau conducted this conversation via email during the week before the election, at night...
© LitHub
Back to top