For the past eight years, many African-Americans instinctively presumed that the venom spewed at President Obama was on account of his race. More recently, we endured a steady stream of chilling videotaped killings of unarmed blacks by police, and the harsh realization that despite all our protests and all our tears, for much of white America, Black Lives Don’t Much Matter. In case after case, the police went unpunished and most whites, when polled, supported impunity.

By the time Donald Trump won the Republican presidential nomination, he vowed to ban Muslims, build a wall to keep out Mexicans, and had scapegoated blacks. We who are black, unlike many of our fellow Americans, were hardly surprised.

For years, Trump attempted to illegitimize Obama’s presidency by stoking the Birther movement and yet still managed to win the support of a cross-section of Republican leaders, including US senators and governors, from North and South. We hoped in vain for a chorus of condemnation, and instead watched a shameful parade of Republican leaders, including House Speaker Paul Ryan, pledge their support or remain silent. Rather than an aberration, Trump’s rise seems the inevitable undraping of a sizable portion of white America that has always lurked in the shadows, stubbornly refusing to sync their customs with national ideals.

And while we’ve made tremendous strides since the outlawing of Jim Crow, recent protests have illuminated the extent to which most elite American institutions—from the Ivy Tower to Hollywood—have remained overwhelmingly white. The recent #OscarSoWhite Twitter campaign, for example, highlighted how, for two years in a row, all of the Academy Award nominees for acting were white. Upon closer inspection, it was apparent why. A 2012 LA Times study found voters in the American Academy of Motion Pictures were 94 percent white and 77 percent male. Only 14 percent were beneath the age of 50, and the median age was 62. Since its founding eight decades ago, fewer than four percent of the awards have been given to people of color.

Meanwhile, protests over a series of racial incidents on college campuses from the University of Missouri to Yale University highlighted the alienation of black students.

They were studying in environments where, according to the latest figures from the National Center for Education Statistics, among full-time professors (including faculty at historically black colleges and universities), 84 percent were white, 4 percent were black, 3 percent were Hispanic, and 9 percent were Asian/Pacific Islander.

Similarly, nearly four decades after the newspaper industry pledged to have newsrooms that reflect the proportion of minorities in the population by the year 2000, they too remain predominantly white. In 2010, the most recent census, African Americans comprised roughly 13 percent of the US population, Hispanics 16 percent, and Asians 5.6 percent.” Yet racial minorities hold 17 percent of daily newspaper jobs, according to the latest survey by the American Society of Newspaper Editors. Fewer than one percent of Fortune 500 CEOs are African-Americans. Just under 4 percent of Fortune 500 CEOs are black, Hispanic, or Asian. And between 1985 and 2014, the proportion of black men in management at all US companies with 100 or more employees barely budged, from 3 percent to 3.3 percent.

And while studies consistently show that blacks and whites use drugs at roughly the same rate, African Americans are far more likely to be arrested and prosecuted. As a result, blacks, though 13 percent of the national population, are 45 percent of those incarcerated. However, when surveyed in 2013, two-thirds of blacks and only one-quarter of whites believed the criminal justice system is racially biased. But the stark reality of our conflicting worldviews had been eclipsed by the façade of equality in the image of Obama.

Trump’s nomination and strong appeal in the general election recalls a more candid period at the turn-of the 20th century when many of the nation’s most esteemed leaders proudly flaunted their anti-immigration and anti-Black rhetoric. It behooves us to recall that, in 1916, Madison Grant’s wildly popular book The Passing of the Great Race advocated the cleansing of America from “inferior races” through birth control, racial segregation, and anti-miscegenation and anti-immigration laws. Grant, a New York high-society lawyer and co-founder of the Bronx Zoo, infamously warned:

The book was hailed by President Roosevelt as “a capital book—in purpose, in vision, in grasp of the facts,” and was later praised by Hitler.

Trump’s rise also recalls the days when President Theodore Roosevelt provoked a national backlash by inviting Booker T. Washington—then the nation’s most prominent African American—to dinner at the White House. From the Senate floor, US Senator Benjamin Tillman of South Carolina declared that as a result of the breach “a thousand niggers… would have to be killed to teach them their place again.” Tillman went on to boast from the floor of the US Senate in 1900 how whites in his state had suppressed the black vote: “We stuffed ballot boxes, we shot Negroes… We are not ashamed.”

We’re also reminded of the prevalence of pseudo-science emanating from most of the nation’s leading institutions of higher learning, including Harvard, Princeton, and the American Academy of Science, whose leading scientists contended that blacks and other non-Nordic whites were inferior. And how, in 1906, the most eminent men of New York City condoned the exhibition of Ota Benga—a young man captured in the Congo—in the Bronx Zoo monkey house, at times with an orangutan. In defense, editors of The New York Times, wrote: “Ota Benga, according to our information, is a normal specimen of his race or tribe, with a brain as much developed as are those of its other members. Whether they are held to be illustrations of arrested development, and really closer to the anthropoid apes than the other African savages, or whether they are viewed as the degenerate descendants of ordinary negroes, they are of equal interest to the student of ethnology, and can be studied with profit.”

Since Trump’s nomination, civil rights groups have cited an increase in bias incidents against Muslim Americans, many of them women donning headscarves. And since the U.S. Supreme Court 5-to-4 vote in 2011 that struck down provisions of the Voting Rights Act, which for decades had protected African Americans from blatant voter disfranchisement, some 22 states have passed restrictive statutes making it harder to vote. Sadly, though, the spectacle of this election has overshadowed the effects of hateful rhetoric, anti-democratic machinations, and the continuing cycle of bias against black and brown people.

We can’t build a wall. We won’t ban Muslims. But if history is any guide, without persistent vigilance, unbridled bigotry will rise again. 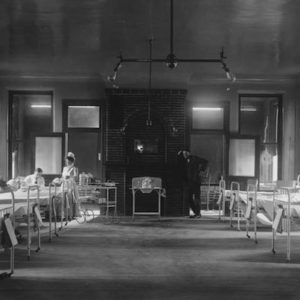 My Austrian great uncle passed away this summer. He had a learning disability and autistic traits and was one of my favorite...
© LitHub
Back to top