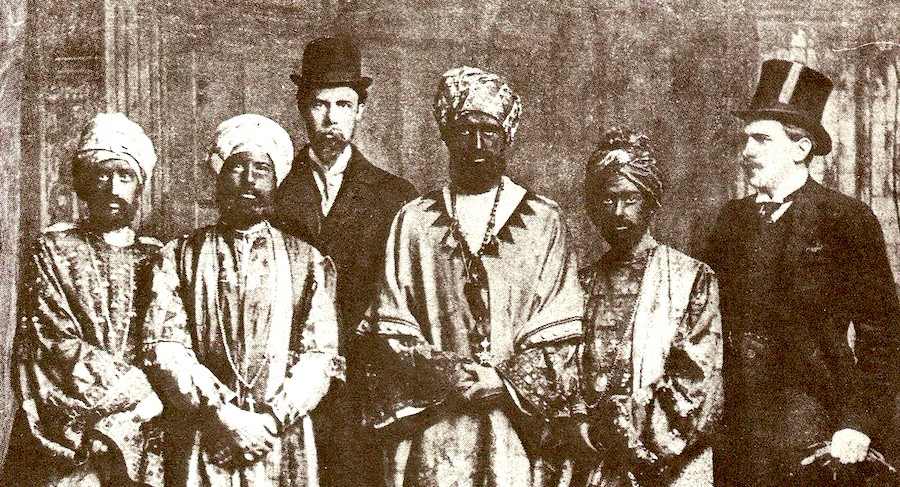 On Justin Trudeau, Virginia Woolf, and the Orientalist History of Brownface

A remarkable photo of Justin Trudeau captures him in 2001 at an Arabian-Nights-themed party, arms wrapped around the shoulders of two smiling white women, his soot-dark fingers upon the bosom of the black-haired woman in the foreground. His face, normally white, is now a deep brown that almost fades into the background of the black-and-white photograph, his teeth and eyes a startling white; atop his head is a turban. He’s grinning.

He looks almost like some frat boy from the late 20th century, surrounded, in his mind, by a harem, the ringleader of a themed minstrel show. Exotica from the Orient, the title of his minstrel performance might read, were the photo from a vaudeville show in the early 20th century—and it is telling, indeed, that the photo could as easily be from the early 1900s as the early 2000s. In a similar photograph, Trudeau, grinning and darkened once more, has his arms wrapped around two Sikhs, fingers prominently blackened.

This was not the first time Trudeau had darkened his face—not tanned it, or bronzed it, but made it the deep, unmistakable hue of minstrelsy. He had done so in high school, when he was singing the Jamaican song “Day-O” that Harry Belafonte had immortalized; in another instance, the young Canadian was caught on camera in an extraordinary video wearing blackface and an afro wig, sticking his tongue out and widening his eyes.

When he darkened his face for the party, Trudeau was a teacher at a Canadian private prep school; later, he would go on to become one of the most visible faces of liberal politics in Canada and North America as a whole. But the face that was visible in his tenure as a left-wing leader was white, despite his obsession with brownface and blackface. So frequently had Trudeau darkened his skin that when he was asked if there were any other photos of him like that, upon the recent revelation by Time Magazine and other outlets that he had worn brownface and blackface, he declined to give a “definite” number.

When Trudeau darkened his face, he was taking part in two long, intersecting but distinct traditions: blackface, which was associated with the mockery of minstrel shows and was the most popular entertainment in America in the late 19th and early 20th centuries; and brownface, a related genre that retains some of the ridiculing nature of minstrelsy, but may also—particularly the way Trudeau did it—layer upon it an aura of exoticism, romanticism, and a vague sense of mystery.

In one of its forms, brownface has frequently been used, historically, as an alternative to blackface, targeting Native Americans, South Asians, nonwhite Latin-Americans, Polynesian peoples, and brown-skinned people broadly; this is the tradition that José Jiménez, the once-famous character of the Hungarian-Jewish immigrant comedian Bill Dana, was part of, whereby Dana’s character—a Latino minstrel who spoke with a thick accent and had notably bronzed skin—was meant to make fun of stereotypes about Mexicans. It was minstrelsy, with less dark paint.

People in these Eastern countries weren’t expected to speak for themselves; instead, many Europeans seemed to prefer the romanticized, stereotyped imagery over the real thing.

But another version of brownface, this one more tied to Trudeau’s Arabian Nights getup, is more complex. Trudeau’s version of brownface is inextricably tied to Orientalism, a set of beliefs, assumptions, and stereotypes—almost wholly created by the British and French primarily in the 18th and 19th centuries—about “the East” (more so the Middle East than the Far East) or “the Orient,” and the people who lived there. “The Orient was almost a European invention,” Edward Said famously wrote in Orientalism, his pioneering eponymous study of this tradition, “and had been since antiquity ‘a place of romance, exotic beings, haunting memories and landscapes, remarkable experiences.’” The endless references in British and French literature to the East as a world of enigma, iniquity, mysticism, magic, and seductiveness bear testament to the overwhelming power of Orientalism as an abiding set of notions, a filter through which to view a vast set of countries.

Orientalism, as Said aptly notes, was not simply a collection of “lies or of myths which were the truth about them to be told, would simply blow away.” Instead, it was a way of gaining power over the East, over the countries that Europe was scrambling to colonize. If European citizens could genuinely believe that Eastern men were deceptive, dangerous, and barbaric, and that Eastern women were calculating, sinuous, sinful succubi, and that the East, broadly, was a world of disease, disrepair, and ancient superstitions, they could more easily justify their nations invading said countries in the name of “improving” and “saving” them. “Orientalism,” Said writes, was “a Western style for dominating restructuring, and having authority over the Orient.”

This version of Orientalism quickly spread throughout Europe. Innumerable paintings, plays, poems, and fiction sought to capture a mystical, dangerous image of the East, complete with dusky-skinned natives and ancient magic (rather than Western notions of modernity). People in these Eastern countries weren’t expected to speak for themselves; instead, many Europeans seemed to prefer the romanticized, stereotyped imagery over the real thing. To adopt brownface was to simultaneously appear exotic, erotic, sly, wild, depraved, barbaric, and vaguely enigmatic, even Sphynxian. Whereas blackface and other strains of brownface aimed almost purely to burlesque and deride, the Orientalist version of brownface sought to do the same while also imparting an air of mystery, mysticism, and danger.

This was the tradition that Virginia Woolf was invoking when she, too, decided to wear brownface in 1910 with five of her companions in the Bloomsbury Group, in an event that was soon dubbed the Dreadnought Hoax. The six decided to send a telegram to the crew of the HMS Dreadnought, the British Royal Navy’s prized ship, claiming that dignitaries from North Africa would be coming onboard. Woolf would be dressed as the Emperor of Abyssinia, and she, along with the others, would wear elaborate brownface, fake beards, and vaguely “Oriental” clothing.

Amazingly, the crew not only let them on board but failed to catch on to the ruse even when the dignitaries began to speak in heavily accented Latin and gibberish that they claimed was Swahili (though they in fact knew some Swahili words); Woolf stayed silent to avoid her voice giving her away. So elaborate were their disguises that Woolf’s own cousin, who was an officer on the vessel, failed to recognize her. The “princes” requested prayer mats and shouted out “bunga, bunga!” whenever they were shown some new feature of the Dreadnought. “Shriekingly funny,” Horace de Vere Cole, who sent the telegram, described the event. “Jolly savages” he described his motley crew.

Blackface and brownface were always power moves when worn by white people, suggesting that the wearer had power over the black or brown bodies being ridiculed.

The hoax filled the news. When the actual Emperor of Ethiopia visited England the next year, children shouted bunga, bunga at him, and the Navy declined to let him on board, due to their own fear of embarrassment if he, too, turned out to be a fake. The hoax is an obvious example of mixing together anti-black and Orientalist tropes, which was a joke for Woolf and was less of a joke for the humiliated Ethiopian emperor and for the nonwhites that white British people like Cole casually deemed “savages.”

Brownface and Orientalist stereotypes are still quite common. Disney’s original version of the animated film Aladdin, for instance, contained an opening song, “Arabian Nights,” with these telling lyrics:

Oh, I come from a land
From a faraway place
Where the caravan camels roam.
Where they cut off your ear
If they don’t like your face
It’s barbaric, but hey, it’s home.

The lines about cutting off ears—a trope of the “savage” Easterner—were amended to “Where it’s flat and immense / And the heat is intense”; the image of the place as “barbaric” remains. As if Disney was unable to contain its desires for Orientalist, racist problems with Aladdin, Disney revealed earlier this year that they had browned the skin of white extras on the set of the remake of Aladdin, so that they would “blend in” better with the world around them; rather than hiring extras who might actually be nonwhite, they inexplicably used brownface.

Trudeau is not Icarus, flying too close to the sun, dropping, from sky to sea, foreground to background, as in Bruegel’s painting; instead, he is the wanderer in another of Daedalus’ creations, the Minotaur’s maze, trying to escape the old beast that, when he finally meets it, has his own face.

He was probably a different person decades ago, as we all are, yet not all of us have worn blackface in the past and pretended we would never do such a thing in the present. As much as I dislike conservativism, I at least know, as Baldwin said, that most conservatives will be forthright about their bigotry and cruelty; I am a liberal, but sometimes I fear that people are simply polite to my face, and when I turn, they, too, turn, turn into something monstrous, or hear it following them from their past. Trudeau’s over-the-top gestures of “wokeness” are likely overcompensations for his fear that his past, dark and grotesque in its monstrosity, will catch up to him.

Can people change? Yes, probably. Can people learn from what they did in their youth? Yes. Is it a virtue to forgive and be open of heart? Of course, and compassion matters deeply to me. But I must also draw lines. I cannot forgive all sins just like that. Saying sorry is not enough to absolve some people of their perdition; apologizing is the start, not the end, and you must do something about it, acknowledge your complicity in racist power dynamics and histories. We must hold our leaders accountable, even the ones whose politics we may share. Blackface and brownface were always power moves when worn by white people, suggesting that the wearer had power over the black or brown bodies being ridiculed. Laughter, as Elias Canetti noted in Crowds and Power, can be a way of showing one’s perceived superiority over another—and in the case of minstrelsy, that is unquestionable.

But should we be surprised? Should we really be amazed to find anti-blackness, Orientalist tropes, and racialized prejudice in the mirrors of people like Trudeau? We should not, because the idea these things represent—that nonwhite people like me are less acceptable, less human, is hardly surprising at all. It is, after all, the history and present we grow up feeling and knowing in our bones and brains. Laws change; people, though, change much more slowly, and some can ignore, or even smile at, the footfalls and guttural breaths behind them for a long, long time.

Here are the National Book Foundation's 5 Under 35 honorees. 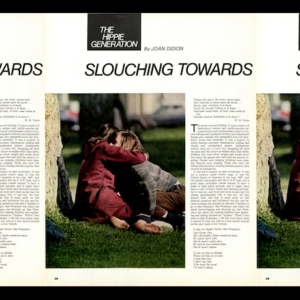 Michael S. A. Graziano considers the astonishing alien intelligence of the octopus, and the evolution of animal consciousness....
© LitHub
Back to top