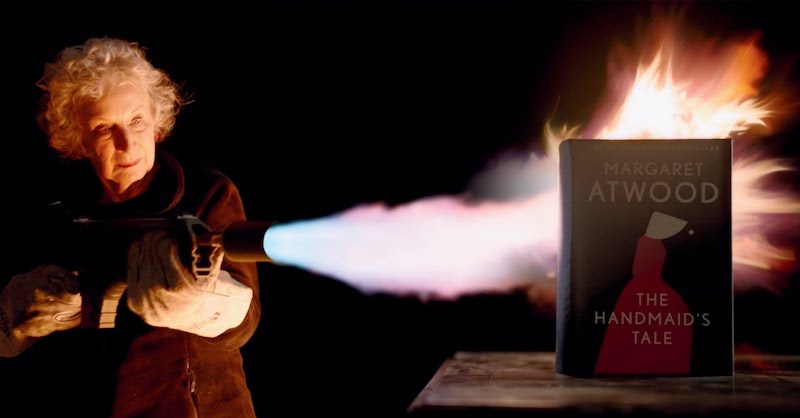 Yes, last night, during PEN America’s glitzy annual gala in New York (which also featured Ruth Negga presenting an award to Zadie Smith and Michael Douglas presenting an award to Vladyslav Yesypenko), Penguin Random House announced that a one-off, unburnable edition of The Handmaid’s Tale would be auctioned through Sotheby’s New York to benefit PEN’s work defending freedom of expression around the world.

Here, in all its glory, is the full video of Maggie doing her damndest to incinerate a copy of her iconic 1985 novel:

I’ve heard of “manuscripts don’t burn,” but this is ridiculous! (Eh?…eh?)

The fireproof edition is a joint project between PEN, Atwood, PRH and two companies based in Toronto, where Atwood is a longtime resident: the Rethink creative agency and The Gas Company Inc., a graphic arts and bookbinding specialty studio.

Instead of paper, the 384-page book, which took more than two months to complete and can be read like a regular novel, was created used Cinefoil, a specially treated aluminum product, and sewn together by hand using nickel copper wire.

While The Handmaid’s Tale has (as far as we know) never been the victim of an organized book burning, it has been subjected to numerous bans and attempted bans down through the decades. Just last year it was pulled from the shelves by schools in both Texas and Kansas.

With book banning (and probably burning) on the rise all over America, there’s never been a better time to donate to organizations that protect literature and freedom of speech. And if you can nab yourself a fireproof copy of one of the greatest dystopian novels of all time while you’re at it, all the better.