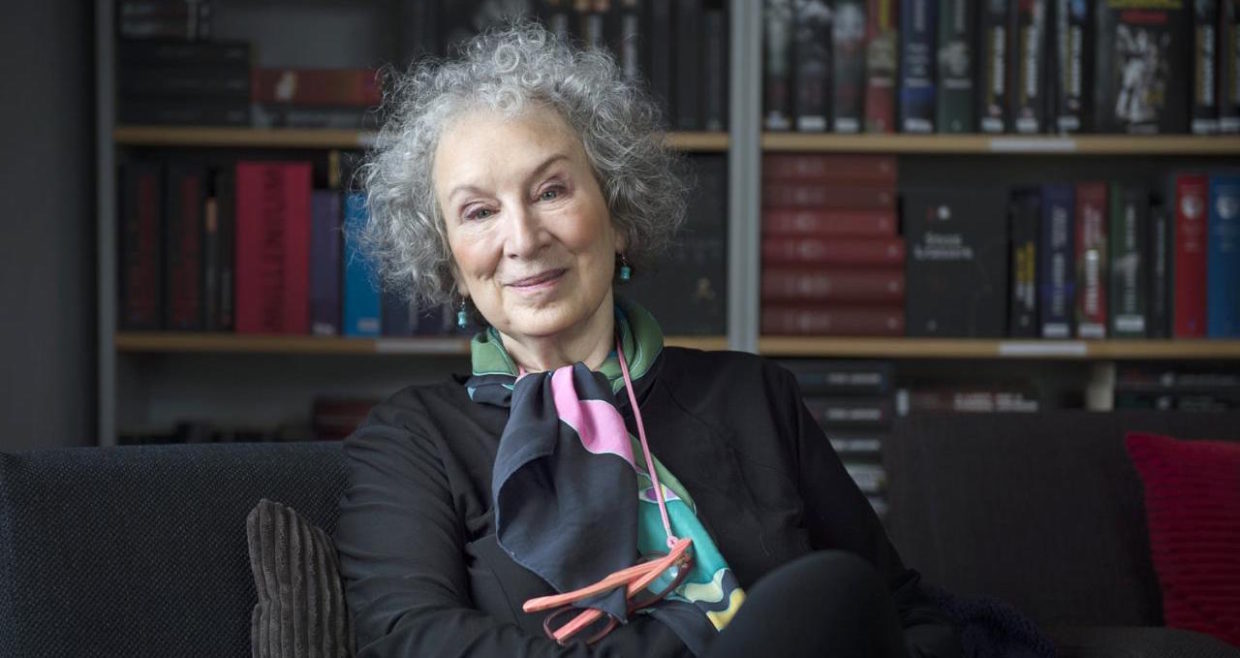 It seems like everyone I know is reading—or re-reading—The Handmaid’s Tale nowadays. With good reason, of course—the land of Gilead has never felt closer (plus, there’s going to be a big Hulu adaptation, so, you know). To be quite fair, same goes for her eco-speculative trilogy, which begins with Oryx & Crake. For International Women’s Day, author, environmentalist, and (apparently) Canada’s premier seer Margaret Atwood gave an AMA at Reddit, in which she answered questions about feminism, guilty pleasures, and what our political priorities should be in this time of crisis. See some of the highlights from her answers below, and catch the whole thing on Reddit.

On the evolution of her feminism and her advice for women now:

I am so shrieking old that my formative years (the 40s and 50s) took place before 2nd wave late-60’s feminist/women’s movement. But since I grew up largely in the backwoods and had strong female relatives and parents who read a lot and never told me I couldn’t do such and such because of being a girl, I avoided the agit-prop of the 50s that said women should be in bungalows with washing machines to make room for men coming back from the war. So I was always just very puzzled by some of the stuff said and done by/around women. I was probably a danger to myself and others! (joke) My interest was in women of all kinds—and they are of all kinds. They are interesting in and of themselves, and they do not always behave well. But then I learned more about things like laws and other parts of the world, and history… try Marilyn French’s From Eve to Dawn, pretty massive. We are now in what is being called the 3rd wave—seeing a lot of pushback against women, and also a lot of women pushing back in their turn.

I’d say in general: be informed, be aware. The priorities in the US are roughly trying to prevent the roll-back that is taking place especially in the area of women’s health. Who knew that this would ever have to be defended? Childbirth care, pre-natal care, early childhood care—many people will not even be able to afford any of it. Dead bodies on the floor will result. It is frightful. Then there is the whole issue of sexual violence being used as control—it is such an old motif. For a theory of why now, see Eve’s Seed. It’s an unsettled time. If I were a younger woman I’d be taking a self-defense course. I did once take Judo, in the days of the Boston Strangler, but it was very lady-like then and I don’t think it would have availed. There’s something called Wen-Do. It’s good, I am told.

On her inspiration for The Handmaid’s Tale:

Ooo, three main things: 1) What some people said they would do re: women if they had the power (they have it now and they are); 2) 17th C Puritan New England, plus history through the ages—nothing in the book that didn’t happen, somewhere and 3) the dystopian spec fics of my youth, such as 1984, Ray Bradbury’s Fahrenheit 451, etc. I wanted to see if I could write one of those, too.

On the books she returns to again and again:

This is going to sound corny but Shakespeare is my return read. He knew so much about human nature (+ and minus) and also was an amazing experimenter with language. But there are many other favourites. Wuthering Heights recently. In moments of crisis I go back to (don’t laugh) Lord of the Rings, b/c despite the EVIL EYE OF MORDOR it comes out all right in the end. Whew.

On her guilty pleasures:

Haha there are so many of them! Just saw Miss Congeniality again on a plane—very funny! Also The Producers and Young Frankenstein. Also Singing in the Rain when depressed. In the World O Vampires, I am a Christopher Lee fan; but also Let The Right One In, Swedish version. Night of the Living Dead, first one… a classy low budget horror film I could go on… :D

On getting questions about being a female writer and/or a Canadian writer:

I have got asked about both a great deal over time. But nobody ever asks me what it’s like to be a canoe-paddling writer, or a writer who gardens, or even a knitting writer. Neglected fields! (I’m going to wish I hadn’t said that.)

On where she gets her ideas:

Ideas… never a shortage! I think my brain just works that way. Not all of my ideas have been amazing. Some have not, NOT worked out! As they say (I think it was Beckett): try, fail. Try again, fail better. Or something like that. We have all had projects that have ended up as smashed eggs on the floor.

On advice for struggling writers:

Check out Chuck Wendig’s blogsite/website. He has SO MANY tips and encouragements! He saves me a lot of time b/c I would say much the same things myself. He’s a freelancer, like me. If you have a day job (as I did for I dunno 16 years or something) the advice just has to cover a more challenging time period (i.e. 12 midnite). No one said this would be easy!

On whether she’d rather fight one horse-sized duck or a hundred duck-sized horses:

Are the ducks dead ducks, or are they alive? Are they Zombie Ducks? Is the horse a Pale Horse? Maybe not enough information here. I think I’d pick the hundred duck-sized horses. Easy to stampede, no? (“Scram, ducks!” Opens and closes an umbrella very fast. That’s worked for me in the past, against those weeny ducks.)

On what kids should be reading:

I think kids find books that call out to them if given half a chance. What IS vital is to have a school library + access to a librarian (marks go up by 20% on average) and a home with books in it, even public library books if possible. I don’t like to tell people what they Have to read because it is a very individual thing. I would have to have a [conversation] with a person. Then I might begin to be able to make a [recommendation].

On how it feels to know that America is on its way to becoming Gilead:

I cannot tell you how strange this feels. I wrote the book hoping to fend it off, and I believe it will be fended off: America is very diverse, a lot of people have been jolted out of political slumber and are paying attention, and the Constitution still stands. The upcoming Hulu TV series of which I’ve seen 3 episodes is even more up-to-date and chilling than the book, so let’s see how that may impact. Support your leaders who are standing against unconstitutional laws; keep informed, as best as possible. Everything is “as best as possible” right now.

Listen: Margaret Atwood talks to Paul Holdengräber on reading vs. watching Shakespeare, the terror of Snow White, and technology and e-books.

Though we gaze at each other across a socioeconomic divide, I’ve discovered over time that my dreams are similar in form,...
© LitHub
Back to top