The best books of the best of 2017 lists: we did the math so you don’t have to (in this case, math = counting) • Lynn Steger Strong on the plotless novel as the art of the privileged • Am I smarter than a second grader? Evan Lavender-Smith debates his son on the merits of Wikipedia, and the etymology of “ladybird” • Emily Wilson on why she gave Homer a contemporary voice in her new translation of The Odyssey • Raina Sainath on the Palestinian children’s book that’s become a target for boycott and censorship • The literary biopic

may be the worst kind of movie, but it’s still a pleasure to watch writers struggle on screen • Our favorite books of the year: Lit Hub staff picks for 2017 • The best book covers of 2017, as chosen by the book designers • Charles Dickens really didn’t like America (which led, in part, to the writing of A Christmas Carol) •  The most rejected books of all time (that eventually found a home)

“This book-shaped object made of cardboard and paper was never going to be a book exactly,” and more of the most scathing book reviews of 2017 •  The Guardian says that Mary Beard’s Women & Power: A Feminist Manifesto “deserves to take its place alongside Kate Millett’s Sexual Politics” • NPR book critic Annalisa Quinn on Kerouac, Sappho, and Olivia Laing • As 2017 draws to a close, we bring you the year’s best reviewed science fiction & fantasy, memoir & biography, science & technology, mystery & crime, poetry & graphic literature, and short story & essay collections • And finally, the best-reviewed fiction and nonfiction of 2017 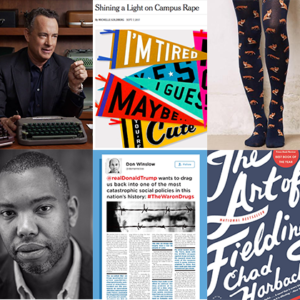 Head here for the beginning of the countdown, 50 through 41. 40. LeVar Burton survives lawsuits, Reading Rainbow has hope! Reading...
© LitHub
Back to top