TODAY: In 1889, Lucila Godoy Alcayaga, known by her pseudonym Gabriela Mistral, the first Latin American author to receive a Nobel Prize in Literature, is born.

47 of your favorite writers’ favorite poems in honor of National Poetry Month • From flash fiction to true crime, 20 books you should read this April • Rachel Z. Arndt on the anxiety of the chronically early • France’s short story dispensers are coming to America • Leslie Jamison talks to Jamie Quatro about faith, addiction, and parenthood •  Lorrie Moore: It’s better to write than to be a writer • From the invasion of Ukraine to the 2016 elections, America is losing the information war to Russia (badly) • Two serious ladies: Sloane Crosley and Megan Amram talk comedy, Twitter, and the rise of the personal essay • Library Tales: Are you pregnant? Can I have some creamer? And other actual questions asked of Kristen Arnett while sitting at the Reference Desk • When the French Communist party tried to break up with Marguerite Duras (she was already seeing other people…) • James Baldwin at the funeral of Martin Luther King Jr. “The atmosphere was black, with a tension indescribable—as though something, perhaps the heavens, perhaps the earth, might crack” • Your pocket guide to 10 essential literary movements of the last 100 years • Ocean Vuong and Sabina Murray on compassion, pedagogy, and the need to make MFA workshops more accessible to writers of color • Meg Wolitzer: “What does it mean to be a woman in power?” • Dictators are afraid of poets: Ursula K. Le Guin on nature writing, technology, and poetic form • Stacy Schiff on the origins of The Little Prince

Best of Book Marks:
From Bob Dylan to Morrissey, Carrie Fisher to David Duchovny, what happens when celebrities write novels • Feminism, famous fathers, and old friends in our 5 Books Making News This Week  • This week in Secrets of the Book Critics: Lucy Scholes on Jean Rhys, publishing’s boozy heyday, and the myth of the frustrated novelist • Karen Russell on Joy Williams, Joy Williams on Tatyana Tolstaya, Clancy Martin on Leslie Jamison, and more Book Reviews You Need to Read This Week • New titles by Meg Wolitzer, Lorrie Moore, Sloane Crosley, and more all feature among our Best Reviewed Books of the Week
New on CrimeReads:

Josh Gondelman: I Kind of Got Bullied Into My Career 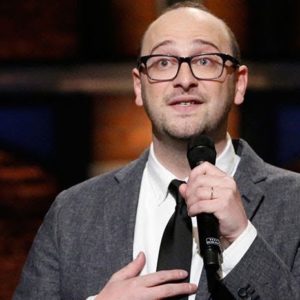 Josh Gondelman: I Kind of Got Bullied Into My Career

But That’s Another Story is the new podcast about how books change our lives, hosted by Will Schwalbe, bestselling author...
© LitHub
Back to top