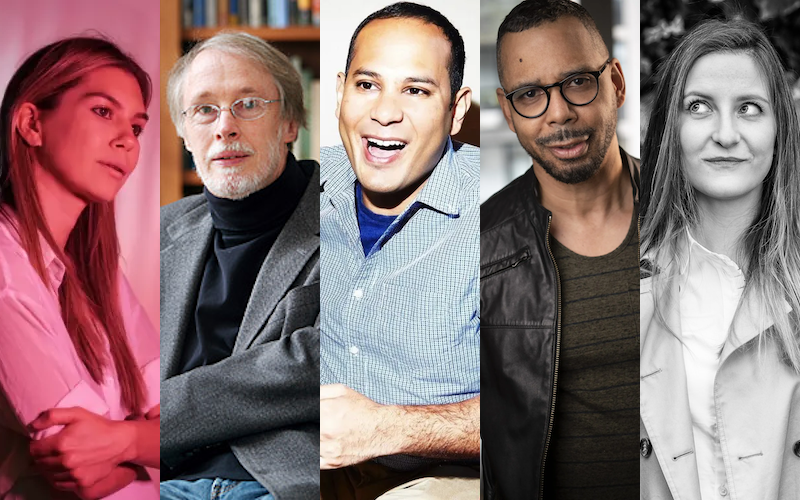 Charles Baxter (Wonderlands: Essays on the Life of Literature)

David Santos Donaldson: Trying to find love in the face of dehumanizing forces. Writing as salvation for a queer Black man. Mining colonial histories and tackling Whiteness. One man screaming his truth, crashing boundaries as glaciers crumble and his true voice emerges with endless possibilities.

Nell Stevens: The unwavering loneliness of life after death, queer joy and queer longing, creative miseries and creative triumphs, the things we do for love.

Sopan Deb: A meditation on grief, forgiveness and redemption. It’s also about the healing and changing power of art.

Nada Alic: Bad Thoughts is about the incompatibility of our interior world vs. our external performance of a self. It’s about aspiring artists. Life-changing emails. The perils of spiritual ascension. Twin eaters. The longing to incarnate. Multidimensional beings. Not knowing where Danish people are from, or how to say “Eckhaus Latta.” Catholic guilt. The feeling that someone, somewhere is probably mad at you. The feeling that someone, somewhere is probably in love with you.

Charles Baxter: My mother, my dreams, what I’ve read, and insults from my sister-in-law.

Nell Stevens: The hopes—fulfilled, surpassed and/or dashed—of new love and travel. The jubilation of queer love and abandoned shame. Piano music. Dark draughty churches and the temporary blindness of stepping out of them into a sunlit square. The feeling of being watched.

Nada Alic: Living in Los Angeles, the Puella Aeterna archetype, gmail.com, the quantum field, my best friend Andrea’s honest opinion, the ghosts of my ancestors who dwell inside me, having vertigo for two weeks in 2019, my mom asking why I never texted my dad back that one time and I was like, I never got a text? and finding out he’d saved my number wrong and had been texting the wrong number for years, going on tour with my husband’s band and thinking, hey, that should be me up there!!!, Oprah’s Super Soul Sunday, Croatian turbo folk, someone telling me, “you’re funny” one time, and internalizing that for years until it became my whole personality, feeling like anytime I pass a man on the street when I’m running that he’s turning around to chase me, then running for my life as a form of training, Starbucks Via instant coffee sticks, my ability to lie down for long periods of time.

Nada Alic: Quitting my job to pursue writing at the expense of every other aspect of my life, doing readings on my friend’s European music tour to an audience of mostly confused and disappointed German men, attending a residency in Banff, meeting other writers, religiously watching a YouTube astrologer named Patrizia to get confirmation that I will sell my book in lieu of having any real world connections/bylines/MFA background, seeing a flock of white doves fly by my window the day before I sold my book and thinking, God?, editing, crying, still editing while waiting for doves to return.

Nell Stevens: The wreckage of another, different book—abandoned. Sharing a study with my wife, writing at desks facing away from each other. Lockdown after lockdown and lockdown. A much-longed-for pregnancy, which I spent throwing up, crying and complaining that I was never going to finish my book before the baby came.

Sopan Deb: A lot of thinking about South Asian family dynamics. A lot of consideration of loss, especially in light of the pandemic. Oh, and wedding planning.

Charles Baxter: Falling in love with a woman at our class reunion, and then beginning a relationship.

Nell Stevens: There’s only one word that has made me want to hurl my laptop into the sea and it is “quirky.”

Sopan Deb: “Flat” is a word that irritates me. It’s a catch-all term for “I don’t like your writing but I can’t explain why,” which I suppose is flat in itself. Oh look, I just did it.

Nada Alic: I’ve noticed that men will often compare me to other men like Mitch Hedberg, David Sedaris and Douglas Coupland, which says less about me and more reveals that they’ve never read a book by a woman before.

David Santos Donaldson: “Lean towards melodrama.” (Only used once but I don’t agree. I don’t know anyone whose honest emotional reality couldn’t also be called “melodramatic.” Maybe it’s because I’m not a WASP?). “Unwieldiness.” “Overheated.” “Overstuffs.” (I get the point: I’m a maximalist! And I fully claim it. Aren’t all things existing simultaneously in life—climate change, the laundry piling up, questions about God, the fight with our lover? It seems naïve to pretend we have the luxury to only focus on one aspect of our lives at a time. Shouldn’t fiction deal with it all—in a coherent and stylish way, of course.)

David Santos Donaldson: I’m a psychotherapist as well as a writer, so I already have two careers, which is very lucky. But if I could have another life entirely, I’d be a film director/screenwriter. My other choices would be either a chef, or parfumier, or interior decorator. I love following Hanya Yanagihara’s Instagram—she posts the most gorgeous interiors. I’d love to create those kinds of living spaces.

Nada Alic: I would freaky-Friday with Dua Lipa.

Sopan Deb: Being a touring musician for a jam band. No two shows are the same. Please, Dave Matthews. Let me play keys for one show.

Nell Stevens: I would like to be one of those severe-looking and immaculately dressed people who sit behind a desk at the front of private art galleries and very occasionally tap a key on a glistening computer.

Sopan Deb: I relish constructing elegant dialogue. Are those my strong suits? I don’t know if I’m any good at it though. It’s just what I enjoy most about writing fiction. As far as what I would like to be better at, it’s the scene setting in between dialogue lines that I struggle with the most.

Charles Baxter: My writing is often funny and has a lot of emotion. For me, plot is secondary to emotion and tone.

Nell Stevens: I know about good sentences, and I know what should happen at the beginning and the middle and the end. I’m hazier on characterization; if a character doesn’t arrive in my head fully-formed, with a voice and taste and foibles ready-made, I have a hard time making it happen. I’m left waiting, hoping the characters do the work for me. And I wish I could be one of those writers who can do the third person without lapsing into unnecessary formality.

David Santos Donaldson: My background in playwriting has helped me learn how to quickly develop a sense of conflict and tension—getting the reader wanting to know what happens next. I’m also pretty good at creating nuanced, complex characters. My background as a psychoanalyst helps with that. But I struggle more with knowing what not to say, what can be left out. I need to work on creating more of a sense of mystery about my characters.

Readers like to feel smart and figure things out themselves. Most of my rewriting is spent cutting about half of what I’ve initially written. I wish I could save time and write more concisely. In corresponding with a friend, George Bernard Shaw once apologized for his letter being so long, and said he didn’t have the time to make it shorter. I know exactly what he means. I’m working on saying as little as possible. (This answer probably needs to be cut in half—see what I mean!)

Nada Alic: Interiority and voice are really fun for me to inhabit, but world-building is a little more tedious. I’d like to reach a point where I can describe the furniture in a room without sounding like someone who has never seen or even heard of furniture before.

Charles Baxter: People have sometimes written fan letters to me, telling me how much my work has meant to them. One couple read a passage from one of my novels aloud at their wedding.

Sopan Deb: Well, when you put it that way, yeesh. Generally, speaking, I try not to think about things I don’t have control of. What I can control is what I put into my writing. I can’t control how it’s received. I can desperately hope people will be interested in what I have to say, but it’s not for me to say that you should have interest in it.

David Santos Donaldson: I’m not going to quote Martha Graham exactly here, but I have to give her full credit for helping me realize that as an artist it’s not my place to judge whether my work is good or bad. It’s only my job to keep my “channels open,” as Graham says; and to let what’s there come out.

And to remember that no one else on this planet will have my exact same experiences, so if I don’t share my voice it will be forever lost. The world will never know it. So together, all of our voices make some kind of great song—maybe it’s beautiful and harmonious, or maybe it’s just an interesting noise. Doesn’t matter! It’s only about letting it out and joining the great universal choir.

Nell Stevens: I think it’s only hubris in the sense that a builder thinking they can build you a house, or a cook thinking they can serve you a meal, is hubris. Writing is a craft—one I’ve worked hard at—and publishing books is a job like any other. I hope people will come to eat at my restaurant. If they don’t like the food, I’ll have to become a better chef, or learn how to do something else. I think those rules are fair.

Flashes of the Quotidian: Readings by Dave Eggers, Sean Ennis, and Dave Housley 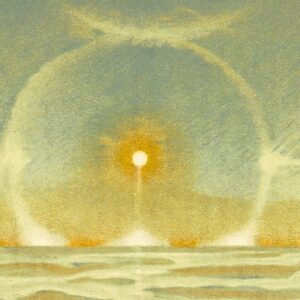 Flashes of the Quotidian: Readings by Dave Eggers, Sean Ennis, and Dave Housley