On the Things You Find in the Trash

I used to work as a garbageman. This is a true statement, and one I tend to bring to the table when slightly cornered by people arguing that as a professional writer I haven’t really done an honest day’s work and therefore haven’t got the slightest clue as to what most people go through every day, for years and years, until they reach retirement and can start missing having a job. What I usually leave out is that it was only a summer job when I was 20, and that it was only for one month. Which, given the fact that it was a five days/week thing, adds up to no more than twenty days in total.

Though it was only 18, due to a couple of national holidays. Plus, only one of these 17 days was spent collecting real, actual, stinking, diaper-saturated, rotting trash. The remaining 17 days—which I base all my expertise on the life of a blue-collar man on—saw me working on a truck that merely collected paper, cartons and cardboard to be recycled. About 8.5 tons of it a day, to be precise. But still, I was a garbageman, with a comfortable working day starting at 5.30AM and usually ending before 8AM, as we only had to finish our designated route before we could head back to the garage with the now empty truck, stamp out and collect pay for the equivalent of 7.5 hours. Needless to say, we did our jobs as fast as we could, never walking when we could run, back and forth with the garbage bins, all we could do to make the day shorter (many of the experienced garbagemen worked two jobs and were thus on their to the next before most people had settled in behind their desks for the day. It should be noted that being a garbageman in Stavanger, Norway back in 1999 was quite a lucrative job, due to a strong union and lots of $$$ perks from working under “unsanitary conditions,” so it wasn’t as much a need to make more money as the fear of ending up on the couch watching daytime syndicated soap operas that drove them to keep busy).

For me, it was simply easy money and an easy job. The only thing I had to do was to a) avoid being killed by my co-worker as he had a tendency to start backing the truck out of cul-de-sacs before I had time to remove the last bin from his blind spot, in order to save a few seconds and b) to hang on for dear life to the handlebar above that little, microscopic platform at the back of the truck, as he pushed the car up to 50mph on the main roads instead of letting me get in the cabin first, as one, for the sake of humanity, is supposed to do. There were seconds to spare and he wanted them all.

Again, not that I objected, there was undoubtedly something both cool and cooling with hanging out on the back of the garbage truck, plus the conversations we had between our stops when I did get to ride shotgun weren’t exactly stimulating, usually limiting themselves to him complaining about what was wrong with people and the world in general (most things) and reminding me that that now was the time for us to light up another cigarette (15 cigarettes on a 2 hour shift was more or less a norm). But the real reason this summer is one of two literary important summers in my life, has to do with what started happening midway through my trashy summer.

Because this was the summer where Norwegians seemingly collectively gave up on philosophy. Weirdly enough it was also the summer they gave up printed pornography. One could make certain assumptions based on this double demise. I for sure did. None of them made much sense. At that time, I was working on what would be my first book the year after, a collection of short prose pieces, and once the amount of discarded philosophy/pornography in people’s thrash started getting conspicuously high, I began looking for ways to incorporate the phenomenon in the book, only to decide that it would seem contrived in a way. Instead, I told my co-worker about the two very different kinds of reading matter that kept flowing into the mouth of our garbage eating truck at least once or twice in each neighborhood as I emptied the trash cans; after all he had been on the job for more than 20 years, I felt certain he would have some wisdom to lay upon me.

Furthermore, the whole you-can-actually-make-some-decent-money-selling-this-stuff spiel made no sense as he showed absolutely zero interest in the books on philosophy which I originally had started clawing out from the trash in a friendly attempt to provide him with more stuff to sell, but soon started stacking them next to the now perilously toppling tower of porno to sort of counterbalance things plus psych him out a bit. The thing is, I may also have out-psyched myself a little in the process, because what became more and more apparent as the stacks got higher, was that while the porn showcased all variants of known (and, to be honest, for most people seriously avant-garde) sexually practices, 9 out of 10 philosophy books were written by the same guy, namely, the Norwegian eco-philosopher/rock climber Arne Næss (uncle to Arne Næss, Jr., also a rock climber and married to Diana Ross, for those interested in a little trivia bonus). Most of his work was represented in the pile, but first and foremost it was different editions of one title in particular, his book Communication and Argument, which included his recommendations for objective public debate, asking people to adhere to some ground rules in order to make any exchange of opinions both fruitful and peaceful (or, if you will, civilized), like avoiding tendentious irrelevance, tendentious use of straw men, tendentious tone of presentation, etc.

For a number of years these points were included in a course called  Examen philosophicum, which all Norwegians going to universities had to take in the initial phase of their education, which made it a dreaded course by most due to its obligatoriness, which again and in itself has a strange tendency to make everything it touches seriously, seriously dreary. Another important aspect of the rather playful philosopher Næss (amongst other things he enjoyed challenging journalists to impromptu boxing matches and in the last 17 years always travelled with a grinning, stuffed toy pig named Timotei, to underline his point that grownups should play more), was his idea of self-realization as the core of his personal philosophy, known as Ecosophy T.

For a while me and my seasoned co-worker kept the genitalia/brain-stimulating battle going, that is, I did, since it was I who had to stack both porn magazines and Næss’ books in the cabin. Every day when our shift was done, he would take his pile and I mine and we’d stash the loot in our respective lockers, only to repeat the process the next day. But unlike the co-worker, who’s appetite for second-hand-erotica-as-currency was bottomless, I arrived at the conclusion that you only need so many copies of books on Norwegian philosophy to last you a lifetime. I can’t recall what happened to the books I collected, maybe I hauled them back to my parent’s house where I stayed that summer or maybe I abandoned them in my overfilled locker to make some vague statement. Maybe they got lost between apartments at some points.

Whatever happened, when I think of it now, the summer of porn and philosophy wasn’t as bizarre as I once thought, but in many ways just evidence of the world changing forever as the Internet rolled in over us. The millennium was approaching. No longer would kids painstakingly search through woods and shrubbery in search of some real nudity, stashed there for later perusal, nor would adults spend a fortune on buying political magazines and newspapers in a futile attempt to conceal the latest edition of Hustler, everything would now be readily available online, for free, and in unimaginable quantities. Neither would it any longer be necessary to constrain yourself and think things through in order to write an opinion or comment in the newspapers, from now on this nuance would be replaced by a no holds barred, spill-your-guts-and-hate free-for-all, where you, via blogs and videos and commentary fields. You would soon be able to say so much random, unfounded shit about everyone and everything that your mouth eventually would be undistinguishable from a rectum.

In short, Næss’s propositions to adult conversation were off the table, replaced by the idea that not only were you now free to self-realize yourself (albeit in a slightly more brainless way than Næss argued for), you were also expected to document it and share it and receive lots of likes for it, inspiring others to do the same, so there would be more liking of things and through that also more unliking of things, adding fuel to the fire of the “Like me so I get the energy to hate you”—philosophy, the books on which may one day, hopefully, be found in abundances in your local garbage truck. The point to all this, though, is not so much to wave a moral finger around as to say that make no mistake, the working class hero and the people with the jobs you’d never do, may be closer to some profound insight than what you can spot from your office window. That is, if you can even be bothered to look up from the screen.

Johan Harstad made his literary debut in 2001 with a collection of short prose titled From Here on You Only Get Older and has since published the novels Buzz Aldrin, What Happened to You in All The Confusion?, Hässelby, 172 Hours on The Moon, Max, Mischa & The Tet Offensive and The Red Handler, as well as a collection of short stories and plays. He has received several literary awards, including the Brage Award, the Ibsen Award and the Hunger Award, and his work have been published in 25 countries. He currently lives in Oslo, Norway. 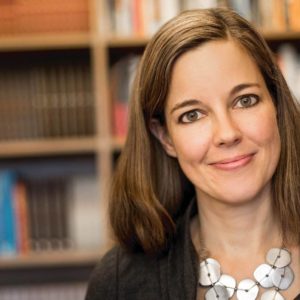 Alix Ohlin on the Question That Inspired Her New Novel First Draft: A Dialogue of Writing is a weekly show featuring in-depth interviews with fiction, nonfiction, essay writers,...
© LitHub
Back to top
Loading Comments...