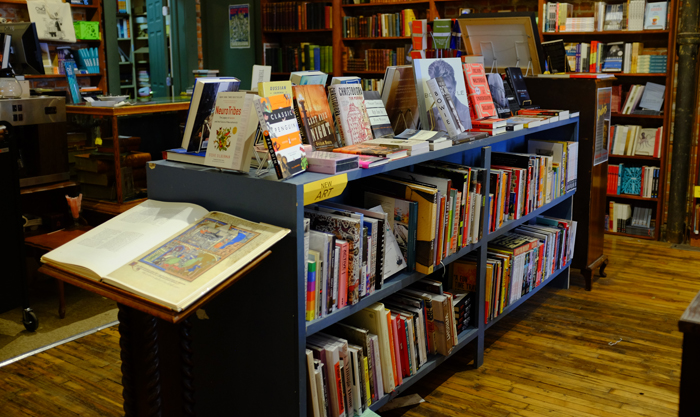 What makes a Biblioasis book? It’s a question that has stumped at least a few people who have tried to answer it; managing editor Vanessa Stauffer now describes its publishing program as “charmingly irregular.” Biblioasis has its roots in the bookstore that Dan Wells founded in Windsor, Ontario, in 1998, and it began publishing its own titles in 2004; however, its most recent high-profile release, the 1,000-page, single-sentence epic Ducks, Newburyport, expanded that eclectic list’s reach to an even wider set of readers.

The Biblioasis team weighed in on publishing a wide variety of titles, their favorite fellow Canadian indie publishers, and how to print a 1,000-page book.

One of the things I love about working at an indie press is that because we’re small, everyone does a little bit of everything. As someone who’s interested in the whole process of publishing, I think this is a huge benefit. You may find yourself moving from marketing to production, admin, and order fulfillment all within a single day. It’s a great place to learn, and also perfect for those of us who love variety in our work lives. I also love seeing books succeed. When you love the books you’re working with, there’s a great sense of fulfillment that comes from seeing them get recognized, and knowing that you and your colleagues have helped make it happen.  –Meghan Desjardins, Operations Manager

What are some of the challenges to working at an independent press?

My favorite thing about working at an indie is also one of the biggest challenges. Since we’re not contained to rigid job titles and sometimes work within multiple departments, it can be demanding, especially during peak seasons. Luckily, these are also the times when we see the biggest responses to our books, which is very rewarding. We also sometimes lack the resources to easily implement all of our ideas, which is particularly difficult when you hear so many great ones from your colleagues. Usually, though, despite this lack, we find creative ways to make them happen.  –Meghan Desjardins, Operations Manager

Nope. We describe the publication calendar of Canadian Notes & Queries, our literary magazine, as “charmingly irregular,” and I think that applies to our publishing program at Biblioasis.  –Vanessa Stauffer, Managing Editor

An academic once did a course on Biblioasis, with the stated aim of trying to determine what in essence was a Biblioasis book.  By the end of the semester, he was both a little frustrated and disappointed to say that he didn’t think that there was one, our list was far too divergent. What he saw as a weakness we understand as a strength: the more we learn and grow as publishers, the more we learn that we’re capable of more, and better. An editor at the press once described our list as being catholic, by which he meant diverse, eclectic, inclusive, and at times in conflict: the press’s strength comes from bringing together a variety of editorial styles, aesthetics, and politics not always in agreement. I like this idea a great deal, and I hope, as Biblioasis continues, that our list becomes more catholic.

Readers, especially in the US, familiar with part of our list—our translation program, say, or our edgier literary titles—might be surprised to see the company these keep: they reside alongside works of formal poetry, Canadian history, political polemic, regional history, critical titles, books on sports and cooking and music: it’s this range that excites us most.  –Dan Wells, Publisher

I think that there have been multiple titles, in a range of different ways, which might be described as game changers. Goran Simic’s From Sarajevo With Sorrow and Yesterday’s People (2005), our second and third trade titles respectively, cemented our commitment to international translation, and to translating books outside of Canada’s official languages, which was most definitely a rarity at the time. Alexander MacLeod’s Light Lifting (2010), our first Scotiabank Giller Prize short-listed title and best-seller, made more people aware of who we were and what we were about. Anakana Schofield’s Malarky (2012) and Martin John (2015), the latter of which showed up on the Giller shortlist once again, showed our commitment to new voices, experimental writing and difficult subject matter: that year an editor at Quill & Quire opined that we were Canada’s leading publisher of the unpublishable, by which he meant books that aren’t supposed to be saleable (experimental fiction, translation, short fiction, critical works), a description I still work into every single grant application as I think it gets to the heart of what we do.

Cecil Foster’s They Call Me George and Mark Bourrie’s Bush Runner, the first two books in a Canadian history series we started a few years ago, explored overlooked and marginalized stories from Canada’s past. Both were national bestsellers, and together marking an expansion in Biblioasis’s program, to include more nonfiction. The first books in our Field Notes series were born in response to the pandemic and civil rights unrest of 2020, as we tried to become more responsible and responsive publishers: the two biggest risks in this series thus far would be Rinaldo Walcott’s On Property, exploring the necessity of abolition, and Elaine Dewar’s just launched On the Origin of the Deadliest Pandemic in 100 Years, exploring the question of COVID’s origin, but even more importantly, how science is currently conducted and its implications for all of us. And then, of course, there was that certain 1000 page single-sentence novel we published a couple of years ago.

Ducks, Newburyport! I’m not sure exactly when we each realized what we’d gotten ourselves into, though of course Dan knew what a 1,000 page feminist epic written in a single sentences would require from the start. When we acquired it, I was a new publicist, naive enough to believe that a work of obvious genius would be easy to publish. Fast forward about a year and I was the managing editor scrambling to find a printer who could bind the thing. Everything about it was big, from the scope of the publicity campaign to the postage on ARCs. (There are still some exceedingly rare blue cover ARCs floating around a USPS netherworld, lost when a box bound for Abraham Associates’ John Mesjak blew out en route: not enough tape.) How we navigated the risks? The same way we do everything, I guess: long hours and quick thinking, good advice from other publishers and invaluable help from CBSD, energizing and inspiring enthusiasm from booksellers across the continent. And a metric ton of luck.  –Vanessa Stauffer, Managing Editor

I think that this is one of the strongest lists overall that we’ve published, especially in the US. It’s so hard not to list everything. Marcello Di Cintio’s Driven (just published in the US), about the lives of taxi drivers, is one of my favorite books of the year, an unexpected delight; Lucy Ellmann’s first essay collection Things Are Against Us, is a ribald exploration of a range of subjects, male idiocy prominent among them: from the Table of Discontents onwards, never has complaining been so much fun. There’s Elaine Feeney’s bleakly, blackly, heart-breakingly comic As You Were, and thanks to American booksellers, an October 2021 IndieNext pick; Judith McCormack’s exceptional The Singing Forest, a deeply moral work about the space between memory and forgetting, law and justice; our two latest Field Notes, Andrew Potter’s On Decline and Elaine Dewar’s pandemic investigation. Looking further ahead, there’s Michael Hingston’s The Kingdom of Redonda, an incredible history of that (mostly) fictional kingdom and Patrick McCabe’s incredible Pogue Mahone, a book I promise will be quite unlike anything else published in 2022.  –Dan Wells, Publisher

We cannot get enough of Lucy Ellmann, so we’re very excited to be publishing her essay collection, Things Are Against Us in September 2021. These are hilarious, searing essays, and the book includes amazing black and white illustrations drawn by Diana Hope that remind me of a feminist Monty Python meets Gary Larson’s The Far Side.

We also have two other books coming out in September that I’m looking forward to: Randy Boyagoda’s Dante’s Indiana and Kate Cayley’s Householders. Dante’s Indiana is the sequel to Original Prin, a NYTBR Editor’s Choice and a Globe & Mail Best Book (although, if you haven’t read the first book, I can attest that Dante’s Indiana stands well on its own). Randy Boyagoda is a meticulous satirist. Dante’s Indiana is darkly funny, strange, and insightful (is there a better combo while reading a book?). Boyagoda is unflinching in how he delves into difficult issues including the opioid crisis in rural America, racial tensions, religion, and cancel culture. Not to mention, the novel includes some of the best dialogue I’ve ever read.  –Michaela Stephen, Publicist

As for Householders, Kate Cayley’s short story collection is brimful of gritty, queer, and utopic worlds. These linked stories explore sexuality, faith, and family bonds. Householders shows how we’re all just searching for signs and connections in this strange world. Cayley shines a light on queer women and their complex lives, which is such a gift to receive in contemporary literature.

I would highly recommend Arsenal Pulp Press and Coach House Books, two phenomenal Canadian indie publishers. Their books are innovative and boundary-pushing, and I’m consistently impressed. If you haven’t yet, check out Joshua Whitehead’s Jonny Appleseed and Casey Plett’s A Dream of a Woman from Arsenal Pulp, or Molly Cross-Blanchard’s Exhibitionists and Suzette Mayr’s Dr. Edith Vane and the Hares of Crawley Hall from Coach House (this is just a handful of their cool books!).  –Michaela Stephen, Publicist

And a couple of our favorites in the USA include Coffee House Press and Graywolf Press, both of which are publishing intriguing and beautiful works. Temporary from Coffee House Press is the best kind of weird, definitely pick this one up for an interesting read. From Graywolf, an office favorite is Milkman, which won the Man Booker Prize in 2018, and at the top of my TBR is Telephone by the ever-great Percival Everett.  –Erika Sanborn, Publicity & Marketing Coordinator 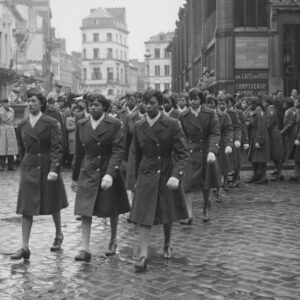 My debut novel Sisters In Arms follows the lives of two fictional African-American women who join the Women’s Army Corps...
© LitHub
Back to top