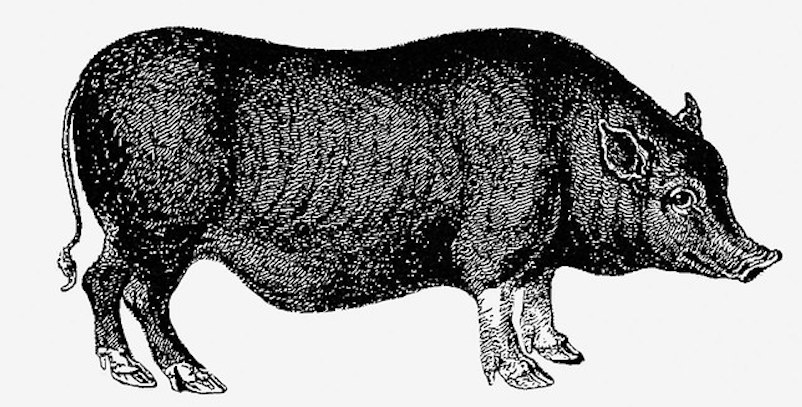 I join P. in Brittany. For the past few months, he has been photographing daily life on a pig farm. It is a family business, run by two farmers, a brother and sister, who took the reins from their parents thirty years earlier. Now, it is their turn to retire. By June, the farm buildings will be permanently empty.

We arrive at the farm in the early afternoon. It is a sunny day. It rained during the night and all around the land is sodden, the paths muddy. I park the car in the yard in front of an old farmhouse refurbished to look like a suburban house. No sooner do we open the great doors than the stench hits us, acrid, like the smell of vomit; it catches in our throats. We find the farmers in a small adjoining office. They do not know me. P. has told them that I’m a writer and we are working on a joint project related to his photographs. They are pleasant, welcoming. They are getting ready to transfer the last of the piglets to be born in the farrowing shed to the fattening pens. Only twenty breeding sows now remain on a farm that, barely six months ago, boasted 130. In a few days, they all will have been sent for slaughter.

We put on overalls, boots, and protective dust masks, and then head for the farrowing house, a cinder block building overlooking a concrete courtyard ringed by movable railings. The brother parks a mechanical digger near the entrance while the sister opens the door to the farrowing house. The heat is stifling. The only opening is a small window thickly veiled by cobwebs through which little daylight filters. The stench is unbearable, and I have to take off my glasses which instantly cloud over. The sows are in cages, wallowing in their excrement on concrete gratings. Beneath them, slurry slowly flows to a drainage channel beneath the central alley. In the farrowing crates, the movements of the sows are hampered: they can only stand or lie down to nurse the litter of piglets that latch onto their teats beneath the infrared lamps. Some sows compulsively bite the metal bars.

In France, 95 percent of pigs are raised in factory farms, in cramped stalls, with no access to the outside world. Through cross-breeding and genetic selection, sows have become more prolific breeders. One of the consequences of this increased fertility has been an exponential increase in non-viable and malformed piglets, which are removed, usually by a process known in French as “claquage”—that is to say, their heads are slammed against something solid: the concrete floor, the wall, one of the bars of the stall. Others die in utero and are born as “mummified” fetuses.

From the moment they reach sexual maturity, sometime between the age of 6 and 8 months, sows are artificially inseminated and forced to farrow in steel crates where they cannot even turn around. No sooner is one litter weaned and taken away than the sow is inseminated again. Sows quickly come into heat again, triggered by stress and hormone injections. After approximately three years of repeated artificial insemination and farrowing, the sows are no longer considered sufficiently productive and are sent to slaughter. Many bear the scars of their exhaustion: they suffer from lameness, prolapse, a chronic inability to move…

I help the farmers to catch the piglets, carry them out and pile them into the bucket of the mechanical digger. Although only a few weeks old, the weaners already weigh 15 kilos. The healthiest are removed early—between 21 and 28 days after birth, instead of the normal three to four months. The males are castrated at birth. All the weaners have their teeth clipped and their tails docked. The farmers unceremoniously grab the piglets by the ears, the trotters, drag them across the concrete, then toss them on top of each other. I lend a hand, doing the best I can not to manhandle them. A cat wanders past the stalls, allowing the piglets to suck on its ears. I am astounded by such familiarity. The sister explains, “He’s a little lost. There have been no new litters in recent weeks. During farrowing, there are always stillbirths. Whenever a piglet was too weak to survive, I’d give it to the cat. Now, he’s got nothing to eat.”

“I just wanted to see how long she’d live.”

When the bucket of the digger is full, we move on to the fattening pens. We unload the weaners. The sister asks me to vaccinate them. In each hand, I hold an intramuscular injection gun. The brother takes a piglet and hands it to the sister, who holds it up to me. I inject the right side of the spine; she turns the animal around, and I inject the left side. Never release the trigger before removing the needle. On the first few attempts, I miss, and blood spurts onto the pale skin. After vaccination the piglets are heedlessly tossed onto the ground. Some are injured by the fall, their snouts or tongues bleed, they struggle to their feet. Urging them on with kicks, the farmer herds them down a narrow passageway towards new gates, new buildings. Then we go back to the farrowing house to collect another load. That day, I vaccinate more than a hundred weaners.

What I find even more striking than the confidence the farmers are prepared to place in us is the fact that they are not concerned that we might be shocked by their relationship with the animals. They talk enthusiastically about their work and willingly admit that it is a difficult business. While we pile more weaners into the digger, I ask the sister whether, in her long years as a farmer, she has ever felt a particular connection with one of the animals. “Once,” she said, “I kept a sow.” I asked her if there was something special about the sow that justified her saving it from the slaughterhouse. “No, nothing. I just wanted to see how long she’d live.” She kept the sow isolated in another building. It lived in a crate for ten years. “Towards the end, her hindquarters became paralyzed, a bit like a German shepherd. So I killed her.”

Later, P. and I visit the fattening sheds where hundreds of young pigs are kept in total, near-constant darkness, broken only by timed fluorescent lights. The feeding system is automated. I have visited pig farms before, but I am always staggered by the sight of these animals appearing out of utter darkness at the flick of a switch. A passageway separates the rectangular pens in which the animals are kept, separated according to size. Most of the pens are so full that the pigs live on top of each other, climbing over each other, crushing each other. When we turn on the lights, the hushed silence is filled with frightened grunting. At first, the pigs scurry away from us, and huddle like a shoal of fish by the concrete wall at the far end of their pen.

Here, too, they are all daubed with shit, living on concrete gratings. The air is literally unbreathable, pestilential, overheated. Despite the masks, P. and I feel our hearts lurch into our throats and regularly have to go outside to catch our breath. The bodies of pigs are covered with bites, scratches, and bruises. The close confinement and the overcrowding lead to aggressive behaviors and stereotypes. Here and there, a metal chain has been hung on which the animals can chew. In farming jargon, this is called “environmental enrichment.”

I see a sow trailing a huge hernia behind her across the concrete. In several of the enclosures, animals have died. Stall-mates sniff and snuffle around their blueish bodies. Some have been aimlessly disemboweled; others have been dragged from the stalls by the farmers and left in the central alley waiting to be sent for slaughter. At every stage, animals die or are slaughtered: from birth, when the runts are dispatched, to the end of the process, when the least profitable or the most injured, the “sickly,” those not worth sending to the abattoir, are killed with a blow from a sledgehammer or a pickaxe. The mortality rate in pigs before they are sent for slaughter is 20 percent, which reveals the pitiless law that governs this concentration camp: survival of the fittest. Even the strongest will eventually be sent for slaughter when they reach the age of six months, 180 days, while the actual life expectancy of a pig is 15 years.

A sickly pig has just been spotted. One of its hind legs is broken. The injury has clearly become infected, because the thigh is swollen. It is smeared with large traces of shit. When I go into the stall to photograph it, it crawls away, desperate to avoid me. I crouch next to the pig and see the look of terrible pain in its eyes. He too will be dispatched, probably as soon as we leave.

P. and I talk about the possibility of showing such a reality, the legitimacy of using it to create art. What are we gazing at when we gaze into the pig farm? And, like the abyss, does the piggery not also gaze into us? How can we continue to callously exploit the millions of animals bred for the meat industry and condemned to a systematic, organized hell, if not by deliberately choosing to be blind to reason?

Once again, at the heart of this barbarity, I have the thought that I am contemplating the dark night of our humanity. Behind the fattening sheds, next the slurry pit, corpses are piled in a dumpster. One of them stares vacantly at the sky.

Translated from the French by Frank Wynne 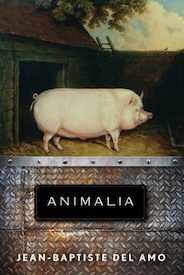 Animalia is out now via Grove Press.

Jean-Baptiste Del Amo is the author of Pornographia, Le sel, and Une éducation libertine, which won the Goncourt First Novel Prize. Animalia, his fourth novel, is his first to appear in English. 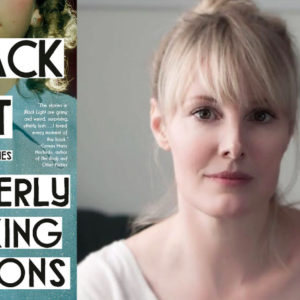