Marcia Butler on Taking Control of Her Internal Camera

My first husband was, among many things, a very good portrait photographer. He particularly adored women’s faces and shot them exclusively through a Hasselblad, a Swedish camera that was used in space by NASA and in the studio by the 1960s fashion photographer David Bailey. My husband liked that—the universal and international élan of the equipment. He’d lived in Europe for several years before I met him in New York City and had been a late 1970s version of Don Draper, an account man for Young and Rubicam.

Part of his job at Y&R was to peruse hundreds of model’s head shots for whatever product they were shilling to the public. That’s the main reason he took up photography: he felt he could get to the essence of a woman’s face better than 99 percent of the jetsam floating across his desk. He quickly learned the considerable merits of bracketing—taking several shots at the same angle with different settings. Once he’d settled upon what he determined to be the correct light exposure, he’d bracket left and bracket right in order to assure that he had captured several planes of depth. A face can be shot from an infinite number of focal points: the tip of the nose, the hollow of the cheek, the bowed flat of the forehead. This fascinated him—the potential beauty of a specific perspective, and how a perfect pooling of light could illuminate objective reality in innumerable ways.

When I married him in the early 1980s, I soon learned that taking pictures was the way he came to know women—including me. Just 21 to his 45, I was initially flattered by his desire to photograph me. I didn’t see myself as particularly pretty but knew to accommodate his insistence that I sit for the camera, almost daily it seems in my memory, though I’m sure it was much less. Over time, the camera became a barrier between us, capturing his increasing displeasure with the very nature of who I was. The clicks of its lens still bang in my ears.

When I began writing my memoir, I laid all his photos out on my desk and sifted through our marriage as catalogued by my face. Almost 40 years later, the photos prompted recollections of many events and by twisting my memory’s lens right and left, I was able to cull down the scenes that rendered an accounting of how this man had shaped me. Many of the stories, brought forth by my shifting expressions on paper, made the memoir cut.

But there was one headshot where the lens was too close, causing my eyes to appear like bottomless sinkholes. The flexible aperture had not been used as a tool to sculpt, soften, or highlight the angles of my face; no, he hadn’t bothered to bracket this shot. Instead, he seemed to point his blunt lens directly into my psyche, when I was at the nadir of my young life. The shot was taken on a day I wished had never happened and surely tried to forget, but couldn’t.

I dove deep into the crevasse of married life he’d dug for us. His age, and the fact that he’d traveled the world, cowed me. He’d fathered three children by two different wives; I was his fourth in what would become a succession of five. I spent my brief time with him secretly wondering, on an almost daily basis, what on Earth he saw in me, bolstered by the fact that I sensed his interest in me was waning. So, when he insisted that I get a tubal ligation, I agreed. At my young age, I certainly couldn’t fathom kids of my own. In fact, I couldn’t imagine what the next minute, hour, or day might bring. We were living second to second, drug to drug. Photo to photo.

Determined to display convincing devotion to our marriage, I dialed the number of the clinic, made the appointment, and even confirmed the day before. In the 5 am morning, when the sky was still black, I hailed a cab, chatting easily with the driver. We discussed the dip in temperature and he told me he wasn’t yet used the cold, having just arrived from his native Jamaica. I welcomed him to America. In the waiting room, I grabbed the pen from the nurse and scribbled my name on the waiver papers. The signature didn’t look at all like my usual neat cursive. And just before they wheeled me into the ice box of a surgical arena, I looked into the doctor’s eyes as he asked if I was sure. Really sure. And I told him, yes. Yes, I was sure. When I asked for an extra blanket in the recovery room, the doctor tucked it under my chin like he would for his own young daughter. I was alone; my husband had gotten drunk the night before and slept through the alarm.

Once home, I went straight to the kitchen, downed a few glasses of water and silently crawled into bed. My husband knew to stay back, to not touch me, to give me the time I needed to forget the morning. I awoke several hours later to the lens of his Hasselblad. As he shot my face—my eyes bleary from anesthesia, my skin stretched taught from dehydration—he told me I was as beautiful as he’d ever seen me. With my insides aching and in need of a Percocet, I considered believing him just that once.

Click. The photograph is like ice—not warmed by sepia years or vague like an oily Doris Day headshot. It stared back at me: sharp, unambiguous, the lighting dead-on perfect. My eyes show surprise at his intrusion. My mouth is slightly open with saliva pooling in the corner, not yet sure of words. My fingers are laced together under my chin as though I were offering an agnostic prayer. Just one click. No bracketing. I flipped the 8×10 glossy over so I wouldn’t see what shame looked like, and, shoving it aside, I knew this event would never make it into my book.

Today that photo lives a comfortable life on a very high shelf. Its harsh singular click remained with me every day I worked on my memoir; whispering to me, telling me that the event needed some light, because that procedure probably affected my life more than any story I chose to include in my memoir. Yet, I’d held it back and kept it private and safe from public scrutiny. And myself.

Through the very act of writing, I seem to have gained an awareness that I have agency over my own camera, my own lens, and that I now welcome all the light the sun will give. I’ve allowed a different truth to step forward: every man I’ve ever been with since that awful first marriage has accepted me thoroughly—no matter the angle, no matter the light. I control the lens, the bracketing, and the clicks.

Marcia Butler’s memoir, The Skin Above My Knee, is available now from Little, Brown. 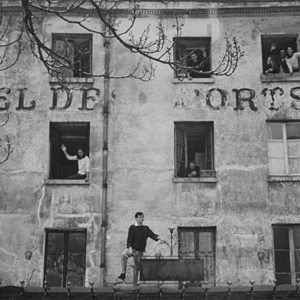 Whenever I read books about Paris, I never get through more than a page or two in before I've closed it again, exhausted...
© LitHub
Back to top