Brett Paesel on Letting Emotional Logic Do the Work

Like every artist, I long for that moment when all my years of work crescendo into a monumental masterpiece that is a testament to my singular focus, painstakingly chiseled craft, layered technique, and profound understanding of my purpose. Like many, I also suspect that I labor with the shadowy doubt that that will ever happen. And until recently, I doubted it because I have been an artistic dabbler who doesn’t appear to have a singular focus.

I am an actor who has appeared in two television series. I am also a writer who has written pilots for television, a memoir, a beauty column, many parenting essays, and a novel. I have also been a consulting producer on two television shows. A few years ago, I taught Language Arts in middle school. Currently, I teach writing to adults in four separate genres. And possibly one of my more rewarding jobs is teaching choral songwriting to fifth graders.

This year, in an effort to sound like an accomplished human on Amazon and Goodreads author pages for my new novel, I spent some time trying to figure out what I actually do. I wanted to scrunch up all my experience and pursuits into a ball and slap a label or description onto it.

I am a storyteller, I thought. Which was true enough, but it seemed a bit broad.

Finally, the only all-encompassing description I arrived at was this: I follow the emotional logic of a story. Actors must connect to material with their gut, not just their head. And what I brought to writing, producing, and teaching was feeling. And that feeling had a logical progression, revealing itself in what characters say and how they behave.

I have to thank Jill Soloway (creator of the Amazon’s Transparent and author of She Wants It) for pointing out to me that my Stanislavski training as an actor could be codified into a technique that was useful to writers as well. They had learned and used the technique in both their scriptwriting and directing, and they were committed to using it as a common language for everyone who worked on Transparent and Amazon’s I Love Dick.

Finally, the only all-encompassing description I arrived at was this: I follow the emotional logic of a story.

The cornerstone is simple. Most writers know that their characters have to want something—even if it’s as simple as a glass of water, as Vonnegut wrote in his Rules of Writing. But often writers forget to go onto the next step, which is to ask themselves, “What is the character doing to get what they want?” And the possibilities, of course, are limitless. They can flirt, connive, squash, envelop, barricade, pounce, soothe—and all other kinds of verbs that immediately make our bodies feel something. These are actions or “verbs that you can feel.” Some verbs are pretty wimpy as far as feeling goes. For example, “walking” is a verb but it simply lies there. In contrast, “stomping” lives in the gut.

Humans and our literary counterparts, characters, are in the act of doing all the time, in the pursuit of getting what we want. At this very moment I am poking or digging at this idea so that I can write an article that makes me sound smart. And I will persist in this action until it’s not effective. At which point, I will shift to another action. Technically speaking, I will perform an action for an entire beat, and when I give up and change actions and there will be a beat change. And it is when the beat changes, when I switch gears, that readers and viewers pay attention. Why? Because something is happening. If all my poking reveals itself in a single lousy sentence, I might grunt out my frustrations and huff instead.

Take for example, a scene that plays itself out in my household every single day. The case of my teenage son, coming through the door after school and wanting desperately to get on the computer and shoot zombies or space aliens or soldiers or bunnies. I really don’t know what he’s shooting because I hate it when he zones out on the computer and he knows this.

If this were a scene I needed to write, I could simply get the information out pretty simply. Her shaggy haired son, smelling ripe from a PE class and an hour on the bus, threw his backpack on the floor and said, “Hey mom, can

I spend some time on the computer?” And maybe that’s fine. But if I want this scene to reveal character and the tenor of our relationship, I might take a page from real life and consider what my son actually does. What are the actions he goes through with me in order to get time to kill?

The first thing Murphy does is pose or masquerade. He casually drops his backpack at the door and makes a show of being exhausted from his hard-working day. Everything he does appears to be labored, as if pouring himself a glass of water from the fridge is draining his last ounce of energy. His actions are telling me that he’s not thinking about the computer at all, he’s simply exhausted because school is hard and he’s a good kid who deserves a break.

In response to his posturing, I ignore him and walk into the other room.

Once a character is in motion—in the act of doing—the words and actions he performs are easy to imagine.

Presumably, he’s been hoping that I say, “Oh, you poor thing. You’re such a great kid and you’ve worked so hard today. You’ll probably feel a lot better if you waste some time on the computer killing things.”

Since his tactic hasn’t worked (it never does, and I have no idea why he persists in using it), he eventually materializes in my bedroom with an entirely different attitude. He’s friendly and asks me how my day was. He even gives me a quick kiss on the cheek. His voice is light and he’s charming me. In response, I listen to him more and generally loosen up. When he sees this, he says very casually (as if it just occurred to him), “Hey, Mom—I was wondering . . . if it’s OK with you. I was wondering if maybe I could spend a little time on the computer.”

Annoyed, I turn back to my desk, shuffle a few papers around and say, “Can we have one day when that’s not the first thing you ask me? Have you heard of a thing called ‘a book’?” Which sends him out of the room.

But only for a second, because then he comes back with a deeper, practical voice and says, “Look Mom, I had to quit earlier than my one hour yesterday, because you started dinner at 6:30 instead of 7:00. So really, you owe me a half hour. Plus, you know I’m not going to have any time on the computer tomorrow because of choir practice . . . ” And so forth. He’s bargaining now; or pressing.

At this point, Murphy has moved through three separate actions to get what he wants. And the reader has experienced a breathing, forward-moving scene lifting off the page. In fact, it’s been a relatively easy scene to write, because once a character is in motion—in the act of doing—the words and actions he performs are easy to imagine.

There is emotional logic to the actions that we choose. Characters on the page or screen embody their motivations as we do in life, usually unconsciously. Murphy may not think pose, charm, press. He’s simply thinking “work mom.” However, if as a writer I spend time breaking down what he’s doing and how I’m reacting, the scene starts to have shape and look like real life.

And while I invariably fall short of my masterpiece, striving for it takes me out of an intellectual assessment of how well I am writing, and into doing. Which is a lot more fun and certainly more emotionally true.

Brett Paesel is the author of the Los Angeles Times bestseller, Mommies Who Drink: Sex, Drugs, and Other Distant Memories of an Ordinary Mom (Warner Books, 2006). Her work has been published in numerous collections and national publications including the New York Times, The Los Angeles Times, and Salon.com. In Hollywood, she has been a consulting producer on Amazon’s television series, Transparent and I Love Dick. She has developed and written shows for HBO, ABC, Fox, Comedy Central, WB, Lifetime and Nick at Nite. As an actor, she was a cast member of Transparent and HBO’s, Mr. Show with Bob and David. She lives in Los Angeles, with her husband and two sons. Her novel Everything is Just Fine is out now. 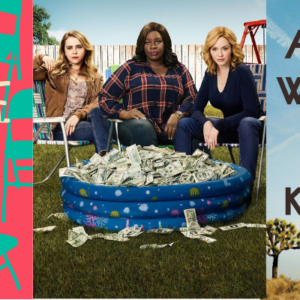 This month, I am recommending a black and white film. It is also in French. Sorry! But I mean, it's Canadian French,...
© LitHub
Back to top