For as many generations as there have been utopian communities in the United States, there has also been a long and parallel history of utopian groupies—the people who so deeply desire to drop out and make the world anew, but who lack the specific convictions or staying power that might allow them to cleave to one community or another. The groupies are messier and more disorganized in their longings than the decisive utopians, who themselves have finished worrying or wondering and are already committed to their daily labors in bringing about paradise.

The groupies, on the other hand, are unclear about what they firmly believe, if not entirely lacking a comprehensive ethical system themselves. But their hopes are just as, if not more, utopian than the communities to whom they attach their curiosity, even if they—the groupies—are hard-pressed to commit to a program. Hope is their vocation. Their hoping, however shifting and sketchy, is endless.

Utopia owes a lot to its groupies, but what personal future was there in groupie-dom?

They possess that defining feature of all proper groupies of any variety, an uncritical, ruthlessly naïve devotion, and it is from that depth at which this kind of endless hope can be felt at all. Like a crush, nourished in the shadows of your heart, the devotion does not necessarily seek completion or results. Utopian groupies are lovers of hope. It’s ideally an unselfish love, an erotic exchange that happens only to ensure that the utopian project continues to grow and flourish and inspire other people through this act of creative love. For utopian groupies, it’s not about eventually starting a community themselves, or even joining one, but about being a kind of accompaniment to what is already happening, which they did not start and which does not require their intervention. It’s an exchange that results in books, magazines, movies, many road trips.

Utopian groupies, like music groupies, are often road-bound, eventually road-weary. They are tied to no single place. They float from community to community, either in real life or as subjects of historical inquiry. They travel as a way to get by, as a coping mechanism, as a way to learn how other people are doing it or have done it, how others have created modes of collectivity, how others have fashioned a life outside of capitalism or have simply figured out creative ways to keep the overhead low together. They travel in order to figure out what they believe and how to live. I suppose I have joined these ranks.

Dreaming of some distant moment when I would no longer be a caretaker for my father-in-law, nor an itinerant adjunct, nor always longing for an elusive home, I’d started reading from a stack of books by some of these utopian groupies, about which I took lots of notes in no particular direction.

Paradise Now by Chris Jennings
In Utopia by J.C. Hallman
Cruising Utopia by José Esteban Muñoz
How We Get Free by the Combahee River Collective
Searching for Zion by Emily Raboteau
Utopia by Bernadette Mayer
The Hawthorn Archive: Letters from the Utopian Margins by Avery Gordon
The Cloister Walk by Kathleen Norris
The Modern Utopian, edited by Richard Fairfield
Utopia Drive by Erik Reece

Utopia owes a lot to its groupies, but what personal future was there in groupie-dom? Does being a groupie auger a kind of dreaming that eventually transmutes into something more, something of your own? The hopes for my own future lived largely in my mind, a kind of mainframe processing endless different calculations while I drove home from work on dark parkways piping New York City in my car, recently given to us by Sweeney’s grandmother before she’d passed away, thus replacing my 2 train commute. Every new idea could hold for about two or three mental moves, and then I’d hit a wall: Where would we work? Who else would be there? Where would Dan live? Where was the money? I could fantasize, get drunk, sit out late with an old friend on a porch and describe new ideas, sometimes get flurries of excitement that would hold over the course of an evening before petering out by morning.

Hope is their vocation. Their hoping, however shifting and sketchy, is endless.

I did other kinds of dreaming, though, in my sleep. For as long as I could remember, my dreams had often been set in big communal environments, populated by no fewer than a dozen or more familiar faces, as central characters to the story and action of the dream; friends and family members, somewhere on an ambiguous compound, a summer camp or a vaguely post-apocalyptic battle camp, a school building or hotel, some kind of large festive event like a wedding, a party, an abbey or a castle fortress with many different buildings and corridors, houses I had lived in blown up to fantastical size. My dreams, during this time, continued in this vein and started to host visitations from my three recently departed grandmothers.

I dreamt of each grandmother, one month after their respective deaths: in the dreams, they were almost dead, but not quite, and always each of them in a different living room of a different house, while other people rushed around busied with various tasks. I’d round the corner and then—“Oh my God, I thought you were dead!” No, they’d say, no, no. Almost laughing. Their eyes had sunken and purpled, like Fred Gwynne in Pet Sematary. They had messages: a confession for my mother to be transmitted via landline; a worry about my husband’s health; a dirty joke they’d wanted to tell me for years.

Before my first grandmother died, she sent Sweeney a letter. In it, she consoled him about his father who was in a coma at the time.

After her funeral, Sweeney’s grandmother sent me a letter. In it, she consoled me about my other grandmother who had just died.

One month later she died.

The third grandmother—my father-in-law’s mother—died without speaking or writing. She knew she was worried about Dan, but she couldn’t remember why.

Then, as I’ve said before, when Dan woke up from his coma, he could not speak or walk.

By all accounts he is still a young man. I walk him in his wheelchair down by the Bronx River. He points to his forehead in agony when he cannot begin or finish a sentence. A clause. A compound word. “Medical,” he says. “Scummy,” he says. “I’m fucked,” he says. He points to his forehead to indicate a physical blockage, a dam. The words are there, but no ladder, and the words beat against the dam until they go limp and die.

In order to imagine a new world, you have to be kind of primed for it.

Before this, he was a defense lawyer, a storyteller, red-faced and laughing in the middle of a group of people. He told stories about the time when he beat the shit out of his ex-wife’s lover! The time he bicycled through the vampire town in Nevada! The time he caught a shark in Brazil! The time, during the great flood of 1972, he and his friends sailed down the Bronx River on an innertube! He told stories, and the room reorganized itself around him.

He’d often tell me, when I first met him, “I used to be a Republican, but now I’m an anarchist,” and he’d laugh, enjoying the shocking sound of it. His identity at that time was changing, though, as a newly divorced man. Money, security, and work had always been a huge source of stress and anxiety in his life, and he was beginning to toy with the idea of letting some of that go, not unlike the gray beard he had shaved off, revealing his very youthful face. Around this time, he began talking about this fantasy, quietly, of moving into a small rural trailer park community and living out his retirement there, dramatically different from the vision of retirement formed under the dual pressures of white Westchester upward mobility and doing right by his peasant Irish grandparents who’d gotten all the way here.

I often dream of him at night, rising from his wheelchair. Or tottering up a staircase. Or moving along a half-moon kitchen counter like a rookie at an ice-skating rink. In the dreams, I feel joy, though not surprise. Because in the dreams I knew he could do it all along, that it had only been a matter of him just standing up. In this soft dream light he looks at me, across the room. He opens his mouth. I hear it before it happens. Speech bubbles out of him in slow, clear streams.

I don’t know what he imagines, or dreams, is coming next now. In order to imagine a new world, you have to be kind of primed for it. You have to be dreaming of it already, so that you can recognize what you’re looking at when it comes. That’s where the groupie and the utopian distinction perhaps falls apart. One must, it seems, be a groupie first. One must be a lover of hope, a dreamer, a fool. 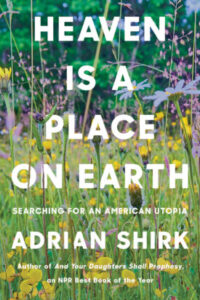 Excerpted from Heaven Is a Place On Earth: Searching for an American Utopia by Adrian Shirk. Copyright © 2022. Available from Counterpoint Press.

Adrian Shirk is the author of HEAVEN IS A PLACE ON EARTH, a personal odyssey of American utopian experiments, out now from Counterpoint Press. Her first book AND YOUR DAUGHTERS SHALL PROPHESY (Counterpoint Press), is a hybrid-memoir exploring American women prophets and mystics, named an NPR ‘Best Book’ of 2017. Shirk was raised in Portland, Oregon, and has since lived in New York and Wyoming. She’s a frequent contributor to Catapult, and her essays have appeared in The Atlantic, Lit Hub and Atlas Obscura among others. She teaches in Pratt Institute’s BFA Creative Writing Program, and lives at The Mutual Aid Society in the Catskill mountains. 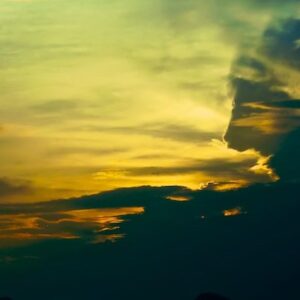 Belief is a bond, a wish, a meaning-making magic that closes the gap between the world as it is and the world as we hope...
© LitHub
Back to top
Loading Comments...