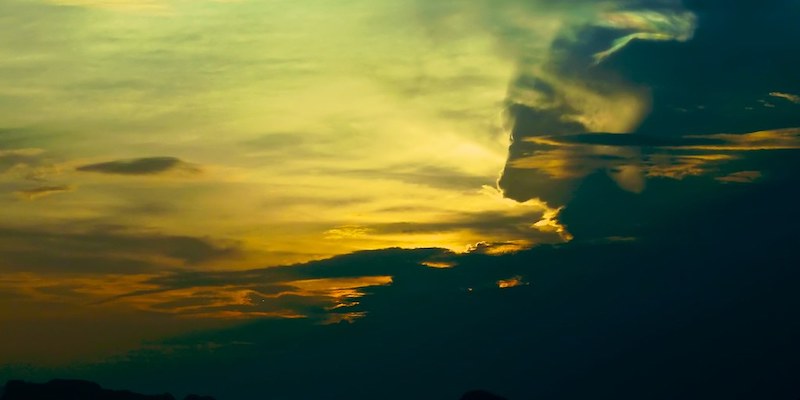 Belief is a bond, a wish, a meaning-making magic that closes the gap between the world as it is and the world as we hope it could be. I spent deep time over the last four years immersed in the lives of others, listening to their closely held beliefs—their certainties in the absence of proof. The resulting book consists of six very different stories braided together to tell a seventh story about how we are more similar in our hopes and our fears than we might expect. Whether it was with a Buddhist death doula or Mennonite missionaries, an evangelical geologist or an academic searching for empirical proof of ghosts, the fiancé of a pilot missing for decades or the ufologists who argue he encountered aliens, their voices hit similar notes in the human song of longing for the unattainable. This gestured towards the idea that we are united in the emotions that drive us into the beliefs that separate us. The following books helped me understand how our drive to place our faith in something—perhaps, anything—greater than ourselves can help us fly, or fall. 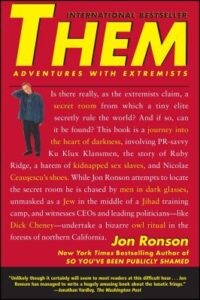 Written before social media’s rise to global dominance, the remarkable thing about this book—which Louis Theroux called a “compulsively readable picaresque adventure through a paranoid shadow world”—is how well it stands up two decades later. Ronson’s 2001 investigation reported on the beliefs and everyday lives of fringe dwellers—including white supremacists, religious fundamentalists, and New World Order conspiracists. As always, Ronson’s use of humor did something profoundly serious. He used it to demonstrate that one of the greatest differences between “us” and “them” is who we trust for our information, and why. In doing so, he presaged the dystopian polarizations now occurring daily where many people get their news. 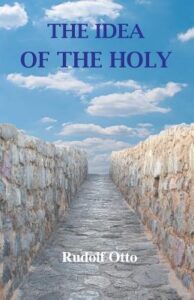 Rudolph Otto, tr. by John W Harvey, The Idea of the Holy: An Inquiry into the Non-Rational Factor in the Idea of the Divine and its Relation to the Rational
(Book Tree)

You just need to log on to your social media accounts to see that rational intellect doesn’t move the world. According to Jung, the religious function is one of our fundamental human instincts. Call it what you will: a higher power, God or gods, life force, communitas, we are wired to seek emotional connection with something transcendent, something outside ourselves. Present in all religions (but not restricted to religion as traditionally conceived), Otto coined “the Numinous” to refer to an all-enveloping experience not just irreducible to words but beyond language itself. He wrote that sometimes it “come[s] sweeping like a gentle tide pervading the mind”, and at others it is terrifying, fascinating, a superordinate mystery. How do we fill that human need for unity in the absence of a commonly held socio-political reality? Otto’s book was published, in German, immediately after the mass death of World War One. One hundred years later, we’re still seeking answers. 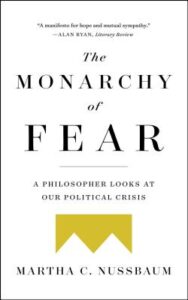 Martha C. Nussbaum, The Monarchy of Fear: A Philosopher Looks at Our Political Crisis
(Simon & Schuster)

Despite all the illuminating work done in the fields of sociology and social psychology—since, at least, Freud’s 1921 book, Group Psychology and the Analysis of the Ego—there has been high cultural investment in an individualized conception of psychopathology. After 2016, however, we started to see more frequent discussion about the ways in which personal pains flowed into collective life and the unique dynamics that occurred there. One of the books contributing to that discourse was William Davies’ historically grounded study, Fear States: How Feeling Took Over the World (2018).Nussbaum’s philosophical study was another. In different ways, Nussbaum and Davies advance the compelling thesis that our political patterns can be traced back to individual experience and, ultimately, our shared “animal vulnerability.” They are particularly powerful when read alongside the illuminating work of clinical psychologist and Jungian psychoanalyst Donald Kalsched.

Kalsched’s 2020 essay, “Wrestling with our Angels: Inner and Outer Democracy in America Under the Shadow of Donald Trump” masterfully connected the interior work of psychology with the exterior work of democracy. Where a dissociative psychology unconsciously defends the traumatically overwhelmed individual by splitting off facts too threatening to one’s self-concept in a totalitarian act of repression, a democratic psychology allows both the good and bad a seat at the psyche’s table to be confronted and ultimately integrated. Elements of both psychologies exist to a certain degree in everyone, however the totalitarian system—with its polarized extremes of good and evil, tends to take over in times of stress or emotional overload to eject painful aspects of reality from the boundaries of conscious experience. Kalsched explains that the impulses which govern our inner lives, also play out externally in our social and political lives.These are ultimately hopeful books. If the pathologies of our political life are the extended result of relational dysfunction, then their potential remedies are relational as well. We are wired to be stronger together. 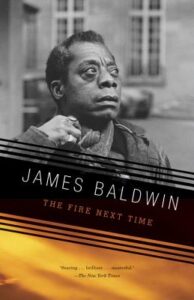 Over the span of two essays—“My Dungeon Shook: Letter to my Nephew on the One Hundredth Anniversary of the Emancipation” and “Down at the Cross: Letter from a Region of my Mind”, drawing on his experience with the Christian church as a youth—Baldwin devastatingly laid bare the chasm between the country’s liberal democratic deals and the country’s patterns and practices when it comes to the deployment of race to maintain group hierarchies. “I imagine,” he wrote, “one of the reasons people cling to their hates so stubbornly is because they sense, once hate is gone, they will be forced to deal with pain.” In doing so he gave us one of the finest explications of how those hatreds—like any human belief—are a safety-seeking behavior; a razor-sharp psychoanalytical insight which highlighted just how dangerous they are. 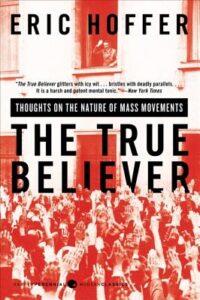 Philip K. Dick said it well: “Reality is that which, when you stop believing in it, doesn’t go away.” We don’t have high tolerance for the discomforts of that truth. We fight them or flee from them—often in the form of shaming or blaming narratives that support personal and political fanaticisms. “Hatred is the most accessible and comprehensive of all the unifying agents…,” Hoffer wrote in the aftermath of the second World War. “Mass movements can rise and spread without a belief in god, but never without a belief in a devil.”   The “family likeness” Hoffer saw between different mass movements was, at bottom, the carrots of belonging, purpose and power which they dangled in exchange for unquestioning adherence.

Seven decades later, his exploration of the universal human susceptibility to influence—especially in times of heightened anxiety—has devastating relevance. Given that much that is old is now new again, Charles Mackay’s wackier 1852 book, Memoirs of Extraordinary Popular Delusions and the Madness of Crowds and Gustave Le Bon’s 1896 study, The Crowd: A Study of the Popular Mind (1896) make interesting companion reading. 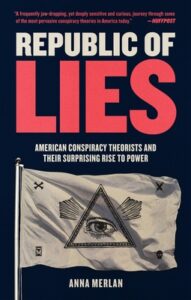 Our current polarization over the pandemic and the climate crisis has arrived right on time. Merlan’s deeply researched, brilliantly synthesized pre-Covid book carried warnings about the ways disinformation filters into the sphere of legitimate public discourse where it can inflict widespread damage are now being borne out daily. Instead of focussing on blame or mockery, Merlan sought to excavate the history, and trace the proliferation, of conspiracy theories through the lens of socio-economic stressors and political disenfranchisement. Like Nussbaum and Davies, her message is chilling but it makes the case—and the space—for hope: if these harms were co-created, so too might be their solutions. 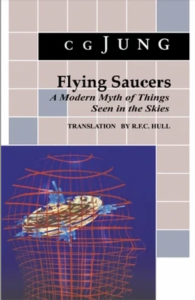 UFOs were treated with a different seriousness when this slim book (taken from Jung’s Collected Works) was published. For me, though, the most compelling aspect of Jung’s approach is his disinterest in the question of whether UFOs are real. As always, his concern is closer to home: what do reports of UFO sightings signify about the needs of the human psyche? His respect for the greatest mystery—the mind—is clear in the emotional weight he accords the “visionary rumors” of things visiting from beyond; that place where we have always insisted on locating the source of our greatest threats and highest powers. It’s interesting that the book was written against the backdrop of an escalating Cold War—“a time when humankind is menaced as never before in history.” Considering the group-driven devastations that came before, those that came after and those we are confronting now—menace seems to be a perpetual part of the human condition. If so, we remain as hungry as ever for new mythologies, new meanings, and new certainties to cling onto. 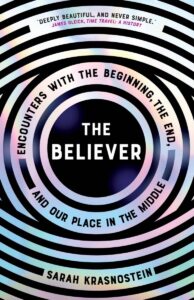 The Believer: Encounters with the Beginning, the End, and our Place in the Middle by Sarah Krasnostein is available via Tin House.

Sarah Krasnostein is a writer and lawyer with a doctorate in criminal law. Born in Charlottesville, Virginia, she divides her time between Melbourne and New York. Sarah’s first book, The Trauma Cleaner, won Australia’s Victorian Prize for Literature, where it was a runaway bestseller. 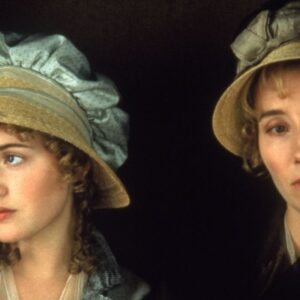