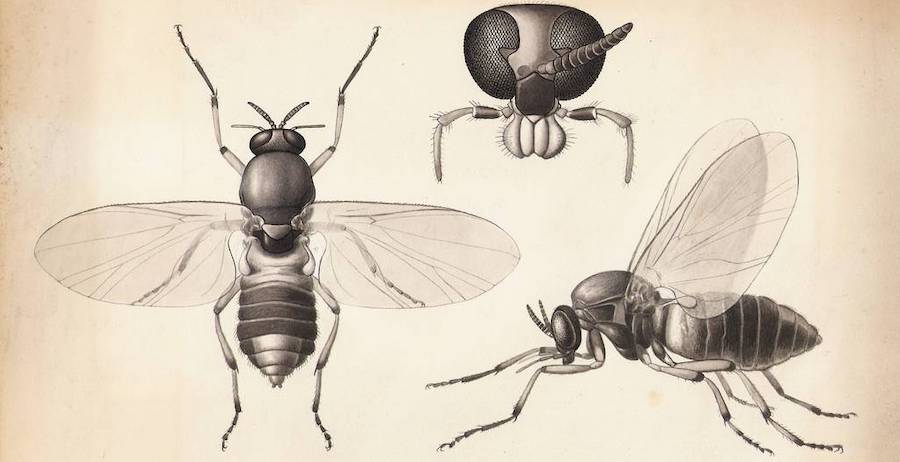 Oliver Milman on Our Great Debt to Insects

Insects have been involved in an intricate dance with almost every aspect of the terrestrial environment for millions of years, forming an underappreciated foundation for human civilization itself. They multiply our food, act as food themselves for the other living creatures around us, rid us of the foulest waste, eliminate unwanted pests, and, crucially, nourish the soil, the 15-​centimeter (six ​inch) patina wrapped around our globe that sustains all of humanity.

Rachel Warren, a professor of environmental biology at the University of East Anglia, compares our deeply woven reliance on insects to the internet. “In an ecosystem everything is connected by this net of interactions,” she says. “Every time you lose a species, you’re cutting some of those links in this network. The more links you cut in the network the less of this internet there is left, until eventually it doesn’t work anymore.”

Without a pollinator, a plant dies and isn’t replaced. The birds that feasted on the plant’s fruits or the deer that browsed on its buds start to dwindle, followed by the animals that feed upon them. “The whole food web just disintegrates,” Warren says. “I don’t think humans could survive in that world at all.”

The weight of this dependence has failed to spark much devotion for insects. Three out of every four known animal species on Earth are insects and yet, within their massed ranks, only butterflies are considered with anything close to affection. Wasps are a baleful summertime menace, ants an invading army fought with toxic sprays in the kitchen, and mosquitoes everything from irritating nuisance to lethal threat. Most of the other 1 million species of identified insects are considered by many people, if they are ever considered at all, to be either quirkily obscure or pointless.

There are around 7,530 types of assassin fly, a creature that spends its short life spearing other insects with a sturdy proboscis in order to paralyze them and liquefy their internal organs. This horde alone comprises more species than mustered by the entire world of mammals—​apes, elephants, dogs, cats, domestic cattle, whales, the lot. A botfly called Cephalopina titillator matures in the nostrils of infested camels, just one specialist among 150 species of botflies, while there are at least half a million species of parasitoid wasp, creatures so detested by Charles Darwin that he wrote in a letter, “I cannot persuade myself that a beneficent and omnipotent God” would’ve created them. What would really be lost if these abhorred wasps and flies, maybe all flies in general, just vanished?

“You get rid of flies? You get rid of chocolate,” says Erica McAlister, a senior curator at the Natural History Museum, London, and an avowed defender of flies who once took part in an entomologist go-​kart event dressed as one. Appropriately, she successfully chased down a colleague who was dressed as feces. “Flies are really important pollinators when it comes to carrots, peppers, onions, mangoes and a lot of fruit trees. And chocolate. They work longer hours than bees and don’t mind the cold as much. We’re beginning to finally take notice of all this.”

There are approximately 160,000 species of Diptera—​an order more commonly called true flies or two-​winged flies—​which includes houseflies, midges, mosquitoes, and fruit flies. The number of fly species is at least four times larger than all the different types of fish found in the world’s oceans. This diverse group perhaps deserves to be viewed as a collection of finely tuned environmental engineers rather than as annoying pests that circle overhead or speckle browning bananas in fruit bowls.

Tiny midges, each the size of a pinhead, crawl into the tiny flowers of cacao plants across Africa and South America and keep the world’s $100 billion chocolate industry from collapse. Thousands of different blowflies, flesh flies, and soldier flies dispose of dead animals, rotting leaves, and feces—​for free. Scientists have harnessed maggots for the treatment of gangrenous wounds without antibiotics, while oil has been extracted from the larvae of black soldier flies and turned into a form of biodiesel to run cars and trucks. “They’re doing such wonderful jobs, all sorts of things that we just don’t realize,” says McAlister. “Can you imagine if they didn’t? You’d be swimming along in a quagmire of feces with Uncle Jeremy floating past you.”

Flies are recondite yet prodigious pollinators. Volucella zonaria, a hefty hoverfly with bumblebee-​like black and yellow hoops on its abdomen, is “basically a flying tank,” according to McAlister. It is capable of buzz pollination, which means it can grip onto petals and violently vibrate, releasing pollen that is stubbornly lodged in the anthers of a plant. Few bees are able to do this, meaning without flies there would be no cornucopia of tomatoes and blueberries available for us to feast upon.

Some plants are completely dependent on certain flies. One extraordinary creature, Moegistorhynchus longirostris, is found on the west coast of South Africa. It has a nonretractable proboscis that measures up to 7 centimeters (almost 3 inches) long, several times its own body length, making for an awkward flailing appendage when flying. It flits around plants that have developed tubed flowers that perfectly fit the fly’s lengthy probe, further highlighting an evolutionary theory posed by Darwin after he was sent some orchids from Madagascar in 1862 that stored nectar in exceptionally long necks. Darwin suggested that a moth with an absurdly long tongue must have evolved alongside this plant—​a species that was only discovered decades after the evolutionary theorist’s death. “If just that fly in South Africa disappeared, eight plant species would die out immediately,” says McAlister. “Flies have got a huge history with pollination that has been wildly ignored.”

Even on their own terms, flies can fascinate—​some species present edible gifts to potential mates, while others perform intricate dances. To some people, flies could even be considered beautiful. Michelle Trautwein experienced a pivotal moment as an art student when as part of a studio review she unveiled a vast biological illustration of a stone fly, an order of insects with elongated bodies, long antennae and two pairs of membranous wings. “The art professor hated it,” recalls Trautwein. The professor strongly preferred the work of a student who had smeared wet cat food across a blank white canvas. “I remember just thinking ‘That’s it. I’m out.’” Trautwein “just fell into flies” and is now a leading entomologist in her discipline at the California Academy of Sciences.

While stone flies are not typically gushed over as classically photogenic, there are flies that could lay claim to such adulation. The Lecomyia notha soldier fly, from Queensland, Australia, has an iridescent, opal-​like exoskeleton, a shimmering blur of purple and blue. Another fly, with a bright, golden abdomen, has been named Plinthina beyonceae, after the singer Beyoncé. “Entomology is a really beautiful, aesthetically pleasing field,” says Trautwein. She was drawn to flies, and insects in general, because they resemble “aliens on Earth.”

Through the destruction of insects’ habitats, the spraying of toxic chemicals, and, increasingly, the heating up of the planet, we have unwittingly crafted a sort of hellscape for many insects, imperiling all we rely upon them for.

“There’s millions and millions and millions of them, we don’t even know how many,” Trautwein says. “Each one is like an alien life form with a detailed life history that often is so bizarre, you couldn’t create it as fiction if you wanted to.” As dizzyingly diverse as insects are, they share a remarkably consistent body design comprising three segments—​head, thorax, and abdomen—​three pairs of jointed legs, compound eyes, antenna, and an external skeleton.

This structure provides the platform for feats that would cause widespread awe if performed by larger animals. The dracula ant can snap its mandibles at 322 kilometers (200 miles) per hour, the fastest animal movement on Earth. Their cousins, the African Matabele ants, have been seen carrying injured comrades back to the nest to tend to their wounds like six-​legged paramedics. Some caterpillars generate their own antifreeze to ward off the cold. Honeybees understand the concept of zero and can add and subtract numbers. But these creatures—​so numerous that they are both unknowable and annoying, so odd looking that they inspire the forms of malevolent beings in horror movies, and so vital that we would perish without them—​now appear to be suffering a silent existential crisis.

The alarm over insect declines has been rung intermittently for some time, if not quite as loudly as now. As early as 1936, Edith Patch, the first female president of the Entomological Society of America, gave a speech decrying the expanding use of insecticides on fruit and vegetable crops. “Certainly too little popular emphasis has been given to the service of insects to mankind,” Patch said, adding that “too few do realize our dependence upon them for most of our food and clothing, a significant amount of our industry, and for much of our pleasure.” More presciently, “If [mankind’s] goal is a wholesale destruction of dangerous insects, his brains will provide the equipment for such a campaign in the course of time.”

In the decades since, humanity hasn’t consciously geared its collective brain to decimate all sorts of insects, much as it hasn’t deliberately decided to drown its coastal cities and fuel enormous wildfires through climate change. Nevertheless, that has been the result. Through the destruction of insects’ habitats, the spraying of toxic chemicals, and, increasingly, the heating up of the planet, we have unwittingly crafted a sort of hellscape for many insects, imperiling all we rely upon them for. “We are creating a world that is not only a problem for insects, but even for us, for humans,” says Pedro Cardoso, a biologist at the Finnish Museum of Natural History.

The exact dimensions of the insect crisis have long been obscured by a fog of logistical impossibilities. There are 1 million named insect species, but as insects are small, cryptic, and not extensively tracked, this is only a glimpse of what is undiscovered and unnamed: estimates vary from an eye-​watering 30 million species to a more realistic 5.5 million. “Who knows what’s out there?” says Goulson. “Probably all sorts of weird and wonderful beasties.” 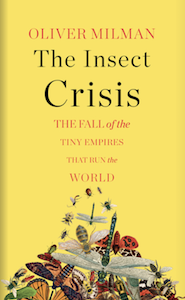 Excerpted from The Insect Crisis: The Fall of the Tiny Empires That Run the World. Copyright (c) 2022 by Oliver Milman. Used with permission of the publisher, W. W. Norton & Company, Inc. All rights reserved.

Oliver Milman is a British journalist and the environment correspondent at the Guardian. He lives in New York City. His book is The Insect Crisis: The Fall of the Tiny Empires That Run the World.
https://olivermilman.com

After How to with John Wilson, Will More Filmmakers Use the Tools of Lyric Essay? 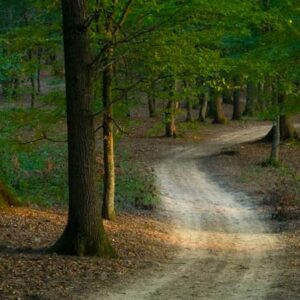 For as many generations as there have been utopian communities in the United States, there has also been a long and parallel...
© LitHub
Back to top
Loading Comments...