Lucy Kogler on the American Bookstore as a Radical Resource

Five years ago, Lit Hub’s inaugural year, I wrote an article about the pressures of bookselling during the holidays invoking David Bowie and Queen and their song “Under Pressure.” Consider this a reprise of the song right around the fifth anniversary of Bowie’s death, and a revision of the content.

While the lyric “pressure raining down on me no man asks for” sounds dire, what’s taken root in my psyche the past year is this line: “It’s the terror of knowing what the world is about, watching good friends screaming ‘Let me out.’” Concerns of five years ago—sidelines vs. gifts, customers without ethics regarding the shoving of Amazon in booksellers’ faces—now just seem laughable and petty.

Amazon. Who cares? Really, who cares. It came, saw, conquered, exploited, demeaned, demonized, distracted, shat upon its workforce, the postal system, small business owners, and stayed, only to succeed in a most robust way. And so a countervailing (almost anyway) instrument was created: Bookshop. Created by Andy Hunter (Electric Literature, Lit Hub, Catapult) for indie booksellers and all industry/organizations involved in selling and promoting books, its mission (as a B-corp, a business that balances purpose with profit) is to provide a viable alternative to Amazon’s monopolistic clench on publishers and consumers.

It is already serving indie booksellers in the form of actual payouts. Is it controversial? To some. Should it be? Maybe not at this moment when much is locked down and locked out. Who has time to focus on something that has already produced actual income for many struggling indies? Could the concern be its efficacy? The reality was and still is: indies need help. The ABA needed help providing a website that works well and Bookshop filled that need. Hunter heard the universal thrum of indies “help us out” before we were even cognizant of the existential wound—the slash of being non-essential businesses during a pandemic—that Bookshop would serve to stanch. A terror mitigated but festering.

But what would society look like if these bookstores hadn’t offered alternative choices to the prevailing dogma and bigotry of that moment in history?

I frequently screamed “let me out” this year. Lucky for me I had friends who heard me and worked to quiet my angst. I reveled in the fact of all the new and diverse voices in indie bookselling and publishing, but despaired at white booksellers so often being identified as “performative,” when in matter of fact they’d been doing the work for years. I rejoiced at the ideas and commitments to form an egalitarian industry, yet was saddened that the rich history of progressive bookselling and publishing in America had apparently been forgotten, negating the work of a cohort of stores that had been providing literature considered “marginal” 40 and 50 years ago: African American, Native American, LGBTQI, women’s studies and women’s health, Asian studies, Latin American studies, Anarchist and Marxist literature, multicultural children’s books, and more. The kind of vocation fellow bookseller and co-owner of DIESEL, John Evans, calls “liberatory bookselling.” So much of the material available then was stapled, or mimeo-graphed, or handwritten. Taken on consignment, these progressive bookstores offered a way to connect to the radical changes that were happening throughout the culture. Understandably, not all bookstores are politically purpose-driven, nor do they all stress any kind of egalitarian mission. But what would society look like if these stores hadn’t offered alternative choices to the prevailing dogma and bigotry of that moment in history?

Back to the lyrics and the miseries of this past year.

As John Lewis wrote in his last op-ed for the NYT, published on the day of his burial: “You must study and learn the lessons of history because humanity has been involved in this soul-wrenching, existential struggle for a very long time.”

Is there a better definition for love of personkind than what Representative Lewis wrote? I am not talking about Agape, because the divine may or may not have anything to do with how we choose to respect and recognize each other as beings. We continue to be engaged in a most “soul-wrenching existential struggle.” Who are we to each other? How does love manifest out of a cesspool of hatred and systemic enslavement?

As a bookseller, I feel that my work continues to be the connective tissue of knowledge to action. We stock and order the manuals (books) that will bring about the micro revolutions ultimately to be united under the umbrella of—THE REVOLUTION. I think this year has proven that nothing less than dismantling will enjoin legions who will continue the fight. Audre Lorde wrote “the master’s tools will never dismantle the master’s house”—my takeaway is that implicit in that idea are the words “finally” and “completely.” The master’s tools themselves need to be broken apart and new material needs to be unearthed to form new tools, but they are the tools currently in the box. Ridding ourselves of them requires more than just negation. Ridding ourselves of the tools “capitalism, racism, all the isms…” will require listening. Bookstores will continue to amplify the sounds of change, and the pain and destruction of 2020 will reverberate on our shelves available for all who wish to deconstruct and understand this most hellish of years.

As we saw on January 6, 2021, the master’s tools did not dismantle the “house” but broke and defiled it. How we reassemble structures of government and who will be included will ultimately show if we are a nation of hate-filled white supremacists or a republic whose populace forces a new Declaration of Independence wherein all of humanity is created equal. Bookstores, as with the occurrences surrounding Salman Rushdie’s Satanic Verses, will have to decide the level of direct action and involvement in changing history to which they are willing to commit. Indie bookstores will have to continue to be the venues where free speech and the free exchange of ideas is preserved.

“Why can’t we give love one more chance?”

“Love” in bookselling and publishing is going to have to mean working hard not to shut people out, down, or up; will require supernatural efforts by indie publishers to fight the conglomeration of publishing; will require that individuals and companies alike stop bullying people into a mindset of a complacent transgression: meaning that we have to do more than jump on the most current issue and ride it until the next one comes along. Ok, let’s give love many more chances: as many as it takes.

Love: people/the planet before profit. Love: fair wages and health care. Love: free exchange of ideas not propaganda, dogma, hate speech. Love: egalitarian, truly democratic systems of government. Love: negation of racist, sexist, classist cults, and the acceptance of universal justice. Love: extracting ourselves from the nightmare so to move onward to the promise of 2021. 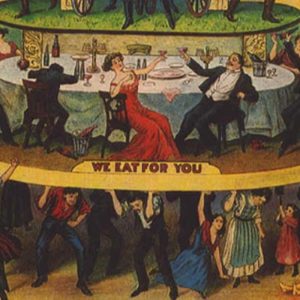