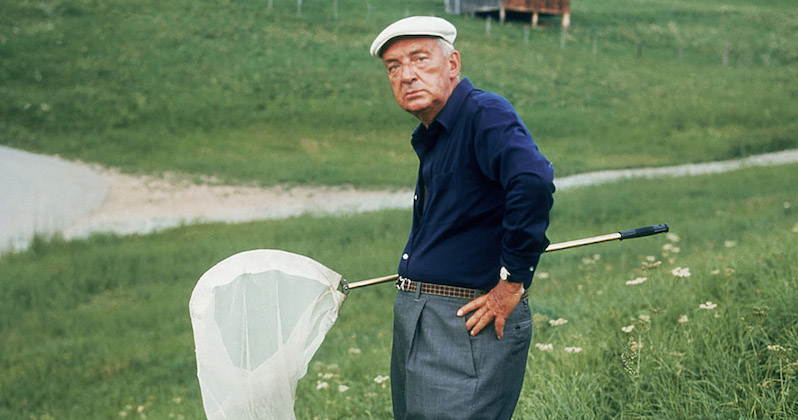 While we try our best not to condone or endorse pedophilia here at Lit Hub, we are all of us pretty vocal Lolita fans. In fact, we’ve probably published more pieces about Lolita than we have about any other book. Down through the years we’ve featured Hanya Yanagihara on the pleasure of reading Lolita’s first 100 pages, Rebecca Solnit on men explaining Lolita to her, Sarah Weinman on why we’ve always misunderstood Lolita, Jenny Minton Quigley on how the publishing world would respond to Lolita today, Emily Temple on the 60 best and worst international covers of Lolita and a playlist for Lolita, Christina Baker Cline on why Lolita is a gothic horror novel, Rebecca Brill on how Lolita went from the banned books aisle to a Lana Del Rey album, and me on the very first reviews of Lolita.

As far as I can tell, however, we have never—in nigh-on six years of semi-regular Lolita posting—featured a video of the bespectacled, butterfly-chasin’ creator of Humbert and Dolores actually reading from his scandalous opus.

This video—taken from an interview Nabokov did with a French television station sometime in the late 1950s—begins with Vlad, armed with a prodigious butterfly net, stalking an unsuspecting specimen though a field somewhere in French countryside. He goes on to state that he will never return to Russia (“for the simple reason that all the Russian I need is with me, always with me . . . I will never return, I will never surrender.”) before reading, in both English and Russian, those immortal opening lines:

Lolita, light of my life, fire of my loins. My sin, my soul. Lo-lee-ta: the tip of the tongue taking a trip of three steps down the palate to tap, at three, on the teeth. Lo. Lee. Ta.

Nabokov then switches into bullish book critic mode, offering up this magnificent dismissal of some of the most lauded novels of the era (including all of Faulkner’s “corncobby chronicles”):

I’ve been perplexed and amused by fabricated notions about so-called “great books.” That, for instance, Mann’s asinine Death in Venice, or Pasternak’s melodramatic, vilely written Doctor Zhivago, or Faulkner’s corncobby chronicles can be considered masterpieces, or at least what journalists term “great books,” is to me the same sort of absurd delusion as when a hypnotized person makes love to a chair.

Having casually eviscerated the masterworks of Messrs Mann, Pasternak, and Faulkner, the literary world’s most famous lepidopterist goes on to list the three-and-a-half books he considers to be the true greats of the form:

Finally, Nabokov reads from a copybook list of things he detests, a list which includes “italicized passages in a novel which are meant to represent the protagonist’s cloudburst of thought,” concise dictionaries, bridge manuals, journalistic cliches, various types of music, and, of course, humility.