Playlist for a Classic Novel: Lolita

Unlike Virginia Woolf, Vladimir Nabokov was not a lover of music. The famous line is this one: “My loathings are simple: stupidity, oppression, crime, cruelty, soft music.” However, in a 1964 Playboy interview he presents a more nuanced explanation: “I have no ear for music, a shortcoming I deplore bitterly. When I attend a concert—which happens about once in five years—I endeavor gamely to follow the sequence and relationship of sounds but cannot keep it up for more than a few minutes. . .  I am perfectly aware of the many parallels between the art forms of music and those of literature, especially in matters of structure, but what can I do if ear and brain refuse to cooperate?”

On the other hand, Nabokov’s prose is about as musical as it gets—not in the sense that it’s pretty, necessarily, which is what some people mean when they say “musical prose” (sometimes it is pretty, of course, though I wouldn’t claim that as a prevailing theme), but rather in its keen sense of pattern and rhythm, its devotion to doubling, its sonic tripping. Just take the (admittedly over-quoted) beginning of the book in question: “Lolita, light of my life, fire of my loins. My sin, my soul. Lo-lee-ta: the tip of the tongue taking a trip of three steps down the palate to tap, at three, on the teeth. Lo. Lee. Ta.” This from a man who claims not to understand music. Perhaps it’s Humbert Humbert who does.

In any event, Nabokov is dead, and I happen to enjoy both his writing and music, soft or otherwise. So here, a playlist for the controversial, incredible novel—perhaps filled not with what Nabokov was listening to as he wrote it, but with songs his characters might have liked, or that perhaps simply share an affinity with the text, whether in theme, sound or project.

“Video Games,” Lana Del Rey
Lana Del Rey’s first album Born to Die is rife with overt Lolita references—there’s even a track called “Lolita”—but it’s more than the literary name-dropping that makes her music suit the novel. It’s a tonal match, of course, and there’s also the fact that Del Rey purposefully presents as both Humbert Humbert and Lolita. That is, she casts herself as the sexualized girl-child but also as the sexualizer—it’s she who sings, after all, she who has created all of this. She has chosen her fate, unlike Dolores Haze. (And the Nabokovian doubling of this victim/victimizer stance has not gone unnoticed by me.)

Many of the songs on Born to Die would fit the bill for this playlist—here’s a solid argument for “Carmen” actually being the most Nabokovian of the lot—but I’ve chosen “Video Games” because in both its dream-haze, swingset feel and lyrics—I’m in his favorite sundress / Watching me get undressed / take that body downtown / I say you the bestest / Lean in for a big kiss / put his favorite perfume on,” etc., it reads as a syrupy reflection of the Lolita that H.H. imagines—a Lolita that is definitively not the real one. This being, of course, one of many essential dissonances of the novel.

“Excitable Boy,” Warren Zevon
Humbert Humbert is considered one of the greatest unreliable narrators ever written, in part because he manages to be so appealing while also being so horrifyingly immoral. He is seductive, enchanting, intelligent, erudite—funny, even. “You can always count on a murderer for a fancy prose style,” he tells us, immediately. Well, he has one, and it works. He is a pedophile, a kidnapper, a murderer—all this is plain. We see his monstrosity, and we don’t for a moment buy his arguments for why what he’s doing is acceptable, but still he keeps tripping us along, somehow. Perhaps the musical equivalent is the kind of cognitive dissonance we see in Warren Zevon’s classic, an upbeat, light-hearted number—complete with “wah-oo”s in the background—about a murderous, obsessive psychopath whom others keep excusing. Just an excitable boy! Hum, too, as he would surely protest.

“Lola,” The Kinks
Well, sure. Not only is it filled with lo lo lo lo Lolas (don’t forget that “she was Lola in slacks”) and the most sexualized of colas, but it’s also a classic road trip song, and what is Lolita but a (rather twisted) road trip novel? It’s easy to picture sad old Hum putting this on the stereo and stealing glances at the forcibly indifferent girl in the passenger seat, hoping that she’ll understand his compliment. Lola herself will not turn away from the open window, of course. She will take her own cruelties where she can get them.

“The More You Ignore Me,” Morrissey
Speaking of being ignored, how about this classic song of obsession—”I am now / A central part / Of your mind’s landscape / Whether you care / Or do not / Yeah, I’ve made up your mind”—which, like Warren Zevon’s track on this list, is presented if not quite light-heartedly then certainly casually, a reflection of Humbert Humbert’s wheedling deceptions that all is fine and good, godly even, despite what he’s actually up to. Lolita is, after all, primarily about obsession, and power, and what these can create and destroy.

“I Will Possess Your Heart,” Death Cab for Cutie
Yes, Humbert Humbert is definitely corny enough to still listen to Death Cab. I actually may never have heard any more Hummian lyrics than those that begin this song: “How I wish you could see the potential / The potential of you and me / It’s like a book elegantly bound / But in a language that you can’t read just yet.” And don’t forget “You reject my advances and desperate pleas / I won’t let you let me down so easily. . .” Are you shuddering? Me too.

“Ruby ’81,” Aesop Rock
This one’s admittedly in a rather different register, but I’m convinced that if Nabokov were a rapper he’d be something like Aesop Rock, who apparently has a wider vocabulary than both Shakespeare and Melville (not to mention all the other rappers known to man, or the person who compiled that chart). This song is somewhat atypical for Aesop Rock, but I chose it because it involves a dog (a leitmotif in Lolita), because it gives me goosebumps, and because phrases like “let her long for all the lunacy” and “the beast she had earlier bestirred” wouldn’t be the least bit out of place in Nabokov’s masterpiece.

“No Pussy Blues,” Grinderman
The speaker in this song by Nick Cave’s side project is like the grimy side of Humbert Humbert, the one he almost never lets slip through the gentlemanly, Eros-citing, perhaps actually more monstrous façade:

I read her Eliot, I read her Yeats
I tried my best to stay up late
I fixed the hinges on her gate
But still she just never wanted to

I bought her a dozen snow white doves
I did her dishes in rubber gloves
I called her Honeybee, I called her love
But she just still didn’t want to
She just never wants to
DAMN!

Perhaps if H.H. really spoke this way, we wouldn’t be so confused.

“All I Need,” Radiohead
This intense track conjures the image of an animal in a hot car as a metaphor for unrequited love, and I think Humbert Humbert would identify with it. In his mind, he is sweating away, a poor old dog trapped in a small hot space made even hotter by his own constant panting, even smaller by his nervous pacing, completely at the mercy of Lolita, waiting for her to open the door and offer up her love to him. Then there’s the petering out refrain at the end: “It’s all wrong, it’s all right”—Hum’s incessant agonized whine. It’s all bullshit, of course, but that’s how these things go.

“Cold, Cold Heart,” Tony Bennett
This one’s for Dolores, who loved the sweet stuff. H.H. fairly rolls his eyes as he narrates:

The Lord knows how many nickels I fed to the gorgeous music boxes that came with every meal we had! I still hear the nasal voices of those invisibles serenading her, people with names like Sammy and Jo and Eddy and Tony and Peggy and Guy and Patty and Rex, and sentimental song hits, all of them as similar to my ear as her various candies were to my palate.

Alfred Appel Jr., who heroically annotated the copy of Lolita I read in college, has identified these “invisibles” as Sammy Kaye, Jo Staffer, Eddie Fisher, Tony Bennett, Peggy Lee, Guy Mitchell, and Patti Page. Rex, he writes, “is a ringer.” Appel goes on to explain for those readers who have not “had the benefit of a 1947-1952 adolescence,” (though this exact timing has been disputed somewhat) that it’s important to know that these “sentimental songs of love and romance were very corny, and backed by ludicrously fulsome string arrangements.” Enough, in other words, to turn the stomachs of both Nabokov and H.H. Good, I say.

“Names,” Cat Power
Lolita is a tragedy. By the end, even Humbert Humbert knows it. He admits, in the book’s final pages, that he has destroyed his beloved with his obsession, though he still believes in the power of art to improve things, at least for him:

Unless it can be proven to me—to me as I am now, today, with my heart and my beard, and my putrefaction—that, in the infinite run it does not matter a jot that a North American girl child named Dolores Haze had been deprived of her childhood by a maniac, unless this can be proven (and if it can, life is a joke) I see nothing for the treatment of my misery but the melancholy and very local palliative of articulate art.

But of course, as Cat Power’s melancholy palliative points out, she isn’t the only one.

Remembering Denis Johnson: "Anything is Possible and It Could Be Extraordinary" 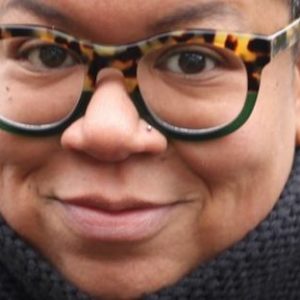 To say that Samantha Irby has a great sense of humor is an understatement. She made a name for herself eight years ago when...
© LitHub
Back to top