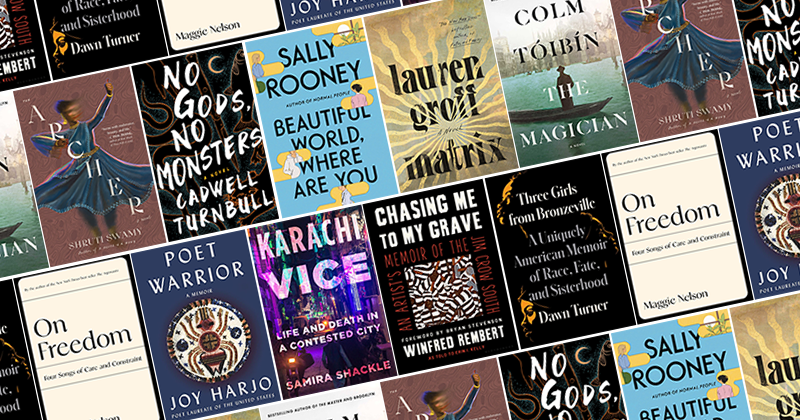 Sally Rooney’s Beautiful World, Where Are You, Lauren Groff’s Matrix, Colm Tóibín’s The Magician, Maggie Nelson’s On Freedom, and Joy Harjo’s Poet Warrior all feature among the best reviewed books of the week.

Read an with Lauren Groff here

“… an inspiring novel that truly demonstrates the power women wield, regardless of the era. It has sisterhood, love, war, sex—and many graphic deaths, all entangled in a once-forgotten abbey in the English countryside … With masterful wordplay and pacing, Groff builds what could have been a mundane storyline into something quite impossible to put down. The writing itself is a demonstration of power. Eschewing direct dialogue and traditional chapters for a three-part structure, the story starts slow but then picks up the pace, barreling through Marie’s years at the convent … The novel’s prose is well constructed and filled with strong imagery that will remain embedded in your subconscious days later … Her use of short but not entirely quick sentences, particularly at the start of the novel, is a tricky way of pacing a story that is written in such a formal tone … Her allusions to female pleasure—such as masturbation and oral sex—are done as stealthily as her allusions to heinous actions such as rape, almost like a whisper that you might miss if you’re not paying attention. But there are instances where allusions are not enough, and she is graphic, leaving little to the imagination when discussing death and sickness … exposes the complexity of being a woman living in a world where men make all the rules, regardless of the era. But it also may leave you wondering whether this is a story about one woman’s feminist aspirations—or her overzealous ambition.”

3. The Magician by Colm Tóibín
(Scribner)

“Toibin delves into the layers of the great German novelist’s unconscious, inviting us to understand his fraught, monumental, complicated and productive life. It’s a work of huge imaginative sympathy … Toibin gives full rein to this sweeping story … On the surface, this is the melancholy story of a sensitive but repressed man who can’t quite connect to his own impulses or supply the emotional needs of his wife and children. But Toibin excavates deeply, sifting through incidents in his life, turfing up incitements to his major fictions … It takes a writer of Toibin’s caliber to understand how the seemingly inconsequential details of life can be transmogrified, turned into art … is, overall, a satisfying and elegantly written novel. Its expansive and subtle rhythms carry the reader forward and backward in time, tracing an epic story of exile and literary grandeur, unpacking a major author’s psyche in such a way that the life of the imagination becomes, finally, the real and only tale worth telling.”

4. The Archer by Shruti Swamy
(Algonquin)

“[A] mesmerizingly poetic world … The Archer‘s beauty resides in Swamy’s sequential narrative form, which reads like music—at times almost exactly like reading a musical score—but with something more; her words carry the visceral power of a dancer’s intersection with air. It’s a very tough technique to pull off. But Swamy’s ability to carve meaning from a lyrical use of narrative brings the reader along with Vidya on her sublime, boundary-pushing exploration … [Swamy’s] new tale of Vidya’s emergence unto herself is a beautiful inheritor of that timeless virtuosity.” 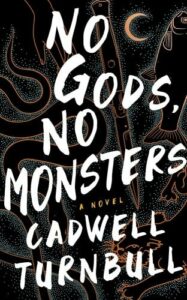 5. No Gods, No Monsters by Cadwell Turnbull
(Blackstone)

“Multiple viewpoints and protagonists are easy enough to juggle while being compelling, and the inclusion of asexual, trans, and other non-conforming identities and relationships adds a rich layer of truth and reality to the text. This novel is built out of the shadows in the corner of a dark room, out of disembodied voices and meta-universes, out of blood, conspiracy, and mind control. Readers will itch for the next book in the Saga.”

1. Chasing Me to My Grave: An Artist’s Memoir of the Jim Crow South by Winfred Rembert
(Bloomsbury)

Read an excerpt from Chasing Me to My Grave here

Read an excerpt from Three Girls From Bronzeville here

“Turner interrupts the monolithic narrative of Black Chicago as ruined and broken, as well as the one-note stereotypes about growing up in public housing. In their place she offers a textured portrait of a moment in time in a particular place … In episodic chapters that read like self-contained short stories woven together into a whole, Turner seeks to understand how three Black girls with very similar aspirations ended up with wildly divergent fates … Turner’s suspension between two worlds provides an ideal vantage for the book. Even when she leaves Bronzeville, she never leaves it behind. Like the poet Gwendolyn Brooks and the playwright Lorraine Hansberry, she is a native daughter of Black Chicago with a bone-deep knowledge of the place and its people. Rather than judge her friend and sister for their choices, she holds fast to her through line: ‘There but for the grace of God go I’ … Recalling their youth, Turner describes the girls’ unchaperoned roaming through the asphalt landscape with attentive detail, hitting all the familiar touchstones of ’70s Black girlhood.” 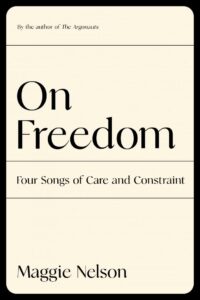 3. On Freedom: Four Songs of Care and Constraint by Maggie Nelson
(Graywolf)

Listen to an interview with Maggie Nelson here

“Maggie Nelson, in taking on this most American of topics in On Freedom, is always alert to the conceptual primacy of constraint, even as she allows herself no little freedom of her own … Readers of her previous work will anticipate the engagingly idiosyncratic way in which she draws on all of her lives: as poet, theorist, critic, mother, spouse … She pays careful attention to those with whom she disagrees, judiciously accepting some of their points while firmly rejecting others … With patience and equipoise, she helps us parse those specificities … Nelson displays the same eloquent equipoise when she ventures into recent debates about the ethics and politics of sex … In discussion after discussion, Nelson shows the same alertness to context, intellectual modesty and the conviction that ethical goodness is never all on one side. She doesn’t aim to provide a positive account of the meaning of freedom. But if we understand freedom, above all, through our opposition to bondage, we can learn a great deal, as her book shows, from carefully cataloging and challenging the many ways of being unfree.”

“… a wonderful hybrid text that mixes memoir, poetry, songs, and dreams into something unique that opens a window into the most important events of Harjo’s life and invites readers to reconnect with themselves—as well as with the land and the knowledge of their people … This is a book about pain and growth; a narrative that shines a light on compassion and stresses the importance of rituals … Harjo’s writing highlights the things that matter most to her, so time passes quickly, dreams and magic play a huge role in the narrative, and the details of how she graduated college, became a professor, her many publications, becoming the first Native American Poet Laureate of the Unites States—and for three terms—and even receiving a National Endowment for the Arts grant barely get mentioned. Instead, Harjo tackles spiritual growth, healing, and how love is unbreakable. The simplicity with which Harjo writes about deep things makes this a beautiful book. It also makes it the kind of memoir that is a work of art and a guide to life for those willing to listen … a celebration of art … Some stories are extremely intimate…However, other stories feel communal … Joy Harjo is more than a poet, painter, and musician; she is a spiritual being aware of the meaning of everything we see as well as the things around us that are usually invisible. And Poet Warrior is an invitation to open our eyes and see it all with her.”

“.. profiles, with great vividness, five individuals who serve as narrative linchpins in a tale of a city hurtling from one crisis to the next … The relentlessness of the violence described by Shackle is both sobering and gripping … meticulously constructs a vibrant mosaic of a city’s underbelly, while disentangling the ways in which Karachi is enmeshed with crime lords, gangs, political interests and militants. Samira Shackle’s prose is nimble and propulsive, as she expertly combines interview, anecdote and reportage with in-depth sociopolitical analysis.”