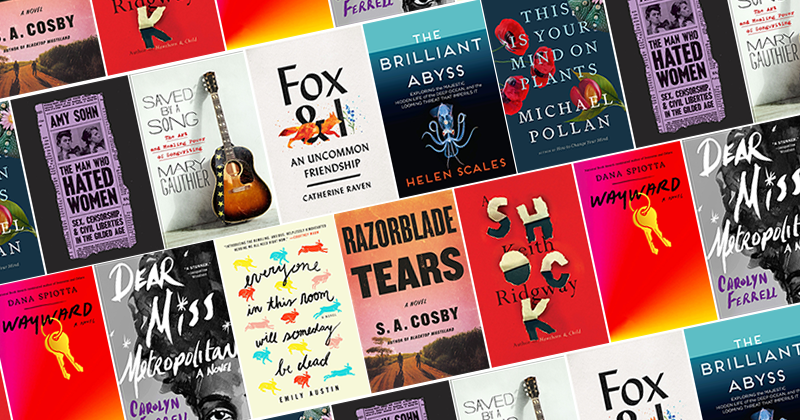 S. A. Cosby’s Razorblade Tears, Dana Spiotta’s Wayward, Helen Scales’ The Brilliant Abyss, and Michael Pollan’s This is Your Mind on Plants all feature among the Best Reviewed Books of the Week.

“Cosby’s drive to expand the chorus of voices representing the South is on full display in his follow-up, Razorblade Tears … The novel’s DNA may seem familiar to readers of Blacktop Wasteland or Joe R. Lansdale’s Hap and Leonard series, but its composition feels utterly unique, as if the elements of one’s waking life were scrambled in a dream … Riding shotgun with the violence, though, is also great beauty — in descriptions of the grief of a community, in the fathers’ stirring awareness of the true meaning of love and even in Cosby’s reverence for the vibrant natural world … The contradictions in Razorblade Tears suggest the deeper moral ambiguity in this and all vigilante narratives. Unlike another Shakespearean character, who famously said revenge is a dish best served cold, these Southern fathers are well aware of the paradoxes of their mission, even as they are compelled to finish it in the name of justice for their boys.”

“There is a special kind of reading pleasure in books that feature seemingly disconnected stories of interlocking lives … Ridgway has returned to interlinked stories for his clever and provocative seventh novel, which has interesting things to say about loss and survival … Readers are instantly involved in the action of Ridgway’s worlds, the characters he writes with great compassion and clarity … A Shock is a more postmodern affair than his previous books … To give too much away about the characters and scenarios detracts from the art of the book. The delights are in the surprises and shocks, the connections that may or may not be there … A book like this hinges on the power of the connections, and Ridgway puts his own stamp on the genre by surprising the reader. There are crumbs that don’t lead anywhere. There are forests with no way out.”

Listen to an interview with Dana Spiotta here

“… furious and addictive … I diagramed Wayward on a paper napkin to show a friend, trying to explain the novel’s hold on me. The lure isn’t just voice or plot … Sam turns out to be an ideal guide. She’s rash, funny, searching, entirely unpredictable, appalled at her own entitlement and ineffectuality—drawn with a kind of skeptical fondness … The local pleasures of Spiotta’s writing are sharp, and many: Sam recalling the narcotic pleasure of holding her daughter as a baby, her painful longing and loneliness for it now. Or smaller moments … So much contemporary fiction swims about in its own theories; what a pleasure to encounter not just ideas about the thing, but the thing itself—descriptions that irradiate the pleasure centers of the brain, a protagonist so densely, exuberantly imagined, she feels like a visitation.”

“… stunning and innovative … The ripped-from-the-headlines premise might seem sensational, but Dear Miss Metropolitan is not horror or thriller, but a literary novel, experimental in style, that asks readers to immerse themselves in the psyches of the deeply traumatized. This is an artful text: an intricate mosaic of shifting viewpoints, black-and-white photographs and fragmented, unreliable narration. The novel is not easy, but how could it be? … Humming with specificity, Dear Miss Metropolitan rejects easy caricatures of suffering … Ferrell resists clichés, allowing the girls’ inner lives to diverge … The premise of Dear Miss Metropolitan is reminiscent of Emma Donoghue’s Room, though Ferrell’s novel feels more expansive in scope and richer in its exploration of trauma. Ferrell writes with no illusions that this kind of violence can be contained; neither causation nor blame is neatly assigned … Through all this darkness, Ferrell writes with a steady, empathetic hand. She leaves space for tenderness … Yes, Dear Miss Metropolitan is devastating, but it shouldn’t be summed up as such. This is a blistering contribution to the cohort of contemporary literature focused on sexual violence. It is a novel that reads like a labyrinth, as complex as the trauma it depicts.”

5. Everyone in This Room Will Someday Be Dead by Emily Austin
(Atria)

“Filled with dark humor, Everyone in This Room Will Someday Be Dead is a beguiling read. Gilda is wholly unique, yet at the same time, exceedingly relatable. The world through her eyes is often a terrifying one, but it is one that anyone who has dealt with anxiety will no doubt recognize. Through it all, Gilda’s endlessly good heart shines through, making her impossible not to root for.”

1. Fox & I: An Uncommon Friendship by Catherine Raven
(Spiegel & Grau)

Read an excerpt from Fox & I here

“What emotional vocabulary can express both the joy and the doubts she experienced devoting copious time and love to a wild creature? This fanciful, literate, unsentimental and yet deeply felt memoir is her answer … Every story demands a language of its own and Raven chooses a fluid, swift-moving style, which takes some getting used to … She’s a superb nature writer, who also delves into cultural topics, such as the fox icons found in Inari temples in Japan … More than most books, Raven’s sets out unique, even eccentric, terms, and she uses fictional techniques to round out her account, including sections told from Fox’s perspective. If a reader is willing, the experience of journeying alongside her as she lives with Fox and meditates about him is extremely rewarding … Fox & I will appeal to those who despair about human depredation of the natural world and sense climate change as the looming, existential threat to life. But Raven’s book isn’t a treatise, it isn’t a call to arms, it isn’t political. Perhaps it is best understood as a plea for understanding.”

2. The Brilliant Abyss: Exploring the Majestic Hidden Life of the Deep Ocean, and the Looming Threat That Imperils It by Helen Scales
(Atlantic Monthly Press)

Read an excerpt from The Brilliant Abyss here

“… it’s so comprehensive and insightful that it will be a long time before it’s surpassed … In the first half of her book, Scales does an excellent job of animating the almost unbelievable panoply of life in the deep. As an explorer herself, she has seen things first-hand that few others will ever witness. But it is the second part of her book, devoted to the human impacts on the abyss, which brought gasps to my throat … It is hard to imagine a more timely or important book than The Brilliant Abyss. Carefully conceived and luminously written, it is certain to be a bestseller, which gives me hope that its urgent message might help save the world.”

3. This is Your Mind on Plants by Michael Pollan
(Penguin Press)

“Readers of How to Change Your Mind will recognize Pollan’s thoughtful and scientific approach to the subject of psychedelic drugs and altered states of consciousness. This Is Your Mind on Plants is an entertaining blend of memoir, history and social commentary that illustrates Pollan’s ability to be both scientific and personal. By relying on contextual history and focusing on three popular, if misunderstood, drugs, Pollan challenges common views on what mind-altering drugs are and what they can accomplish.” 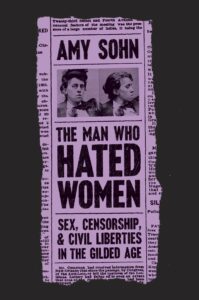 4. The Man Who Hated Women: Sex, Censorship, and Civil Liberties in the Gilded Age by Amy Sohn
(FSG)

“… a fascinating look at a key historical moment for free speech and women’s rights in the U.S. … It’s an engaging, sensational history, made more so by Sohn’s effective writing … Both entertaining and informative, this volume will appeal to readers interested in feminism, freedom of speech and the press, and U.S. history in general.”

5. Saved by a Song: The Art and Healing Power of Songwriting by Mary Gauthier
(St. Martin’s Essentials)

“Starting with the song’s lyrics, Gauthier recounts her personal connection to the song through concrete, accessible personal narrative. By the end of each chapter, readers have gained a behind-the-scenes scoop on the real-life experiences that influenced the song and a wise takeaway for their own lives … Alongside these gems from her lifelong study of creative practice—think Anne Lamott meets Julia Cameron meets Patti Smith—Gauthier also shares all the gory details of her recovery from addiction, plus quotations from the artists and writers who influenced her own development … Anyone who can still write from the heart about writing from the heart after being in the music business as long as Gauthier has is the real deal. Her book invites seasoned artists to deeper authenticity, new artists to deeper craft and all readers to deeper self-reflection.”