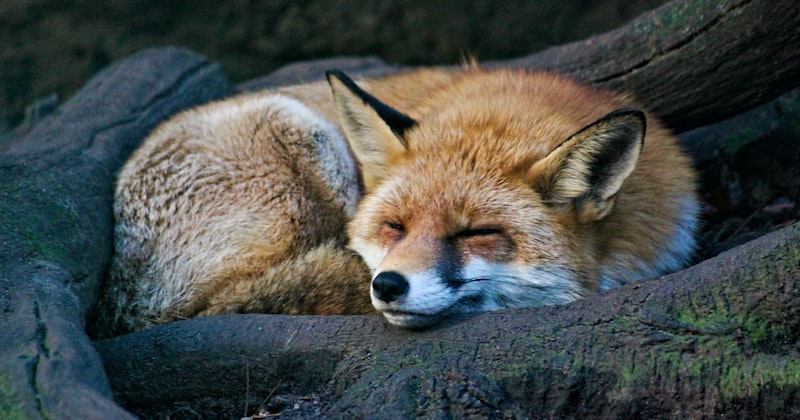 The Gateway to Friendship: How and—Why—I Befriended a Wild Fox

Catherine Raven on Interspecies Empathy and an Unexpected Furry Companion

By early May, we had read The Little Prince several times. Since I never bothered with a bookmark, we read freestyle. Most days I did more talking than reading. When my supply of scintillating stories ran out, I brought out a new book. Fox had to listen to me read from Dr. Seuss’s Horton Hears a Who!, a glossy, red oversize book about an eponymous elephant who hears the peep of an eponymous Who in the thunderous Jungle of Nool. No other book in my cottage seemed appropriate for someone with an 18-minute attention span and modest mental acuity.

“Whos are so small that their entire town fits on a tiny speck embedded in a thistle.” I held up a drawing of a vulture-like bird with a single flower in its beak. “Black-bottomed eagle. It’s making off with the thistle with Whoville inside.” Fox tilted his chin up for a view. In the story, the vulture-like bird drops the Whos’ thistle into a field with a billion other thistles. The endangered Whos call out for help, and only the caring, observant, and big-eared Horton can hear them.

“Horton,” I said, holding up another page, “sets out to find the Whos, one thistle at a time.”

When the wind wasn’t blowing, our valley was well suited to reading alfresco: cozy, well lit, and not too tight. And private. Although several landowners divided the foothills, borders were invisible, structures were scarce, and fences uncommon. You might find a bit of barbed wire wrapped around a few cattle paddocks and chicken coops, a couple strips of post-and-pole-confined mules and horses.

Fox and I followed a party of four resident deer shuffling toward his den. In the dusky light, their backsides formed three white streaks of distinct phosphorescent guidelines: the tail in the center and two lines along the backs of each lower leg.

“I wonder if that has a purpose, Fox—all that glowing like highway markers?” I guessed, out loud, that backside markings allowed deer to follow each other and march in straight lines. We stopped speculating about deer when we came to a patch of white sage. After checking that thatch ants weren’t hanging underneath, I pruned a bouquet of long, soft leaves and slipped them into my coat pocket.

Phosphorescent white markings on mule deer had a purpose only if straight lines also had a purpose. So, there was our next topic: the essence of straight lines. I didn’t care what we discussed. His inability to precisely understand me afforded a limitless number of engaging topics.

The four deer joined a herd line crossing the alfalfa field below us. Walking in a straight line would save deer energy if they were plowing through deep snow because only the lead deer would break new trail and everyone else would use less energy than the animal it was following. But the field wasn’t snowy. Maybe the straight line confined their scent and shrunk whatever advertisement they’d be flashing to predators. Maybe not. We didn’t need an answer; we really just wanted to stretch and poke around. I squinted, my eyelids fluttered, and the deer became pylons lined up in the seemingly endless emptiness of east central Montana.

Yes, Fox and I were goofing off. We were not doing science, collecting data, or writing hypotheses; he wasn’t helping me write a textbook. Instead, we were entertaining ourselves with an endeavor no more intellectually rigorous than playing with green army dolls. Night after night, when more respectable individuals paired up and watched TV or visited movie theaters or leaned on counters spotted with gooey droplets of yellowing cream and called fancy drink orders to a barista, Fox and I spied around.

Days after our discourse on deer, he disappeared. I sat alone at the rendezvous site. Grief descended on the fourth day. I didn’t recognize it. By focusing specifically on one goal—finding the fox—I reduced everything around me to a blur. It’s not that hard to do if you are used to looking through a bow sight. Meanwhile, the target image in the center—the lost fox—grew so large that all the images necessary to maintain sanity disappeared, and madness enveloped me.

I walked miles from the cottage along gravel roads until they ended on private land; I followed faint dirt trails until they disappeared into bedrock. Almost four miles from the cottage, a man hoeing a tiny garden outside a single-story modular house hadn’t seen a fox. Not even after I asked him six or seven times. Perhaps I shouldn’t have been wearing such an old and poorly engineered down coat. While pleading my case, raising my arms and gesticulating, I noticed white feathers raining on me. They were escaping through the seams of my coat and floating around me like I was a crazed cooped chicken.

His inability to precisely understand me afforded a limitless number of engaging topics.

Every passing truck, either government or civilian, deepened my paranoia that a human predator had taken advantage of Fox’s good nature. Federal personnel would be out trapping who-knows-what for whatever reason. Civilians shot anything capable of menacing chickens and anything that looked like it might grow up to be a coyote. Lion chasing, a popular (and legal) habit-forming sport, kept hunters and their hound dogs on the prowl in the surrounding wilderness. A lion hound without a mountain lion to tail is a hound on the trail of a fox. Trucks drove down from the National Forest behind me every day, all with stocked gun racks in the cab and ominous boxes in the bay. And each one could have been holding Fox—dead, caged, or manacled.

Sheets of old snow stretched over the ground like slices of Swiss cheese, pale yellow and rubbery. Round clumps of bunchgrasses pushed up through the snow, cutting out neat circles. It was the ugliest snow of the year, and its inability to capture and hold animal tracks sabotaged my search. After dark, while wondering if it was time to give up, I thought about those double rainbows that had changed the course of our relationship by convincing me that nature’s most wonderful gifts are often short-lived. But a rainbow and a fox are imperfect analogues. One is ethereal, the other precarious. I accepted that, but I wasn’t ready to live without him. Sitting in my enclosed stairway, the only dark place in the cottage, I decided to ask God for a favor in exchange for giving up some vice.

Rifle casings lined up on the stairwell ledge beside me, all headstamp down so they doubled as miniature vases. Some held dried twigs of red osier dogwood, others one or two feathers: orange flicker, yellow meadowlark, blue Steller’s jay. I handled all of them while considering the deal I could cut. Nothing came to mind. Unless God took a very broad view of “vice,” I didn’t have anything swap-worthy.

Playing with the stock market? Would that count? In grad school, I ate ramen for dinner and powdered milk for breakfast, skimming my tiny salary to buy shares in companies that published great books and sometimes picking up shares of companies whose biomedical research I admired. I still owned the stocks, and the market was kind of like gambling. I could offer that up in a trade. Maybe. But… no… it wouldn’t work. Free-market capitalism was way too complicated to explain to God.

Instead, I reasoned with God, telling him to bring the fox back because he deserved a longer life. Did I believe that God would answer my prayer? Yes, I knew he would. Not because I believed in God, but because I knew that God believed in foxes.

While trolling for Fox by sweeping moose-hide mukluks through the tall grasses, I spotted a new trail. Lined out parallel to Fox’s main trail, the new one stretched across higher and dryer ground. In that new trail, in direct line of sight of both my cottage and his den, three thorny weeds stood erect. Last year’s Russian thistle, they were enormous weeds relative to the width of the trail, but relative to the billion acres that a less-discerning fox could walk through to get to my cottage, you would think they were three very inconsequential weeds. The thorns, however, produced consequences by any measure, tearing my bare hands to strips as I tugged them loose. After pulling out the old Russians, I sat back on my heels, folding my head down so the cold wind couldn’t get to the sweat under my neck. I was sucking air against the stinging torn flesh on my palms when I looked up to see, bounding right at me, Fox—bursting through a sheet of tall, cylindrical ryegrass like a gunslinger through batwing doors.

If I had been a reasonable person, and not teetering on the cusp between despair and elation, I would have known to save up some of this overwhelming joy, store it, use it to buffer myself when the next bad thing happened, because bad things, inevitably, do happen. Instead, I figured that happiness was so resplendent, and the universe so kind, that nothing bad could ever happen again.

In each of my online undergraduate classes, I posted a short autobiography. That spring, for the first time, I wrote: “Hobbies:” and then I filled in: “befriending foxes.”

“How do you befriend a fox?” they asked.

I now knew for sure I had not chased down our friendship. My attempt to objectify Fox as a research subject had failed; my attempt to extrapolate him into a generic and impersonal animal had backfired. The more I watched him, the more I understood him and appreciated his ease of living; insight became empathy. And empathy, I am convinced, is the gateway to friendship. Do you think I told the undergraduates that? Yes? Then you have never tried to teach evolution to undergraduates. Believe me; they have enough on their plates learning about vestigial tails without contemplating the relationship between empathy and friendship.

“Making friends with foxes is not easy,” I told my students. “You need alligator skin because you are going to pull a lot of weeds.” 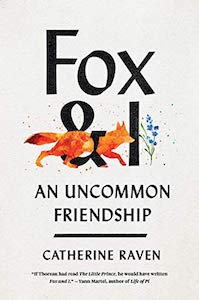 From FOX AND I: An Uncommon Friendship by Catherine Raven. Copyright © 2021 by the author and reprinted with permission of Spiegel & Grau.

Catherine Raven received her Ph.D. in biology from Montana State University and is a former National Park Ranger at Glacier, Mount Rainier, North Cascades, Voyageurs, and Yellowstone National Parks. Her natural history essays have appeared in American Scientist, Journal of American Mensa, and Montana Magazine. She is currently an Assistant Program Director and Professor at South University in Savannah, Georgia. 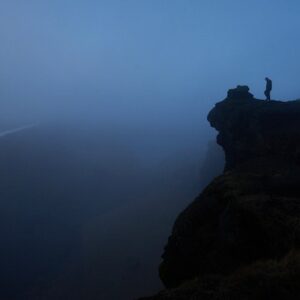 We are always bigger than the pain we feel. Always. The pain is not total. When you say “I am in pain,” there is the pain...
© LitHub
Back to top
Loading Comments...