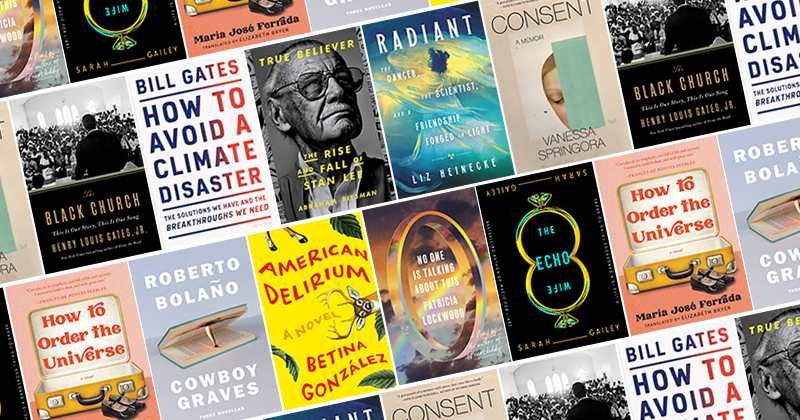 Patricia Lockwood’s No One is Talking About This, Roberto Bolaño’s Cowboy Graves, Henry Louis Gates’ The Black Church, and Bill Gates’ How to Avoid a Climate Disasterall feature among the Best Reviewed Books of the Week.

1. No One is Talking About This by Patricia Lockwood
(Riverhead)

“Now Lockwood has put that strength into her first novel, No One is Talking About This, which leaves no doubt that she still takes her literary vocation seriously. It’s another attention-grabbing mind-blower which toggles between irony and sincerity, sweetness and blight … Lockwood deftly captures a life lived predominantly online … This portrait of a disturbing world where the center will not hold is a tour de forcethat recalls Joan Didion’s portrait of the dissolute 1960s drug culture of Haight-Ashbury in her seminal essay, ‘Slouching Towards Bethlehem’ … Lockwood is a master of sweeping, eminently quotable proclamations that fearlessly aim to encapsulate whole movements and eras … It’s a testament to her skills as a rare writer who can navigate both sleaze and cheese, jokey tweets and surprising earnestness, that we not only buy her character’s emotional epiphany but are moved by it … Of course, people willbe talking about this meaty book, and about the questions Lockwood raises about what a human being is, what a brain is, and most important, what really matters.”

“… a razor-sharp psychological thriller … [a] twisting thought experiment about both the creation and the humanity of clones. Evelyn is a fascinating character, a brutal, practical scientist who often grates at the reader with her stubborn refusals to apologize … a slow burn, but the emotional intensity simmering under Evelyn’s skin and the revelations that spin out of the plot are well worth the investment. Gailey’s expertise with suspense and their success in presenting the reader with impossible choices about the ethics of cloning, biological programming and editing, and of Evelyn’s specific, difficult situation, will leave the reader thinking about the novel long after the final page.”

3. How to Order the Universe by María José Ferrada, trans. by Elizabeth Bryer
(Tin House Books)

“M’s systematic attempts to make meaning out of her chaotic life may be futile, but they offer a canny insight into her magical mind… Ferrada—a prizewinning Chilean children’s book author—cleverly pulls the curtain back at just the right moments to offer a more objective view of M’s young life, to track the story of her disenchantment. In elegant and simple prose, ably translated from the Spanish by Bryer, the author disperses clues to explain what M cannot, like the cause of her mother’s sadness. M’s logical thinking reflects the human instinct to create order out of chaos, but her coming-of-age is realized only once she begins to grasp her messy reality, the tragedies of her childhood, the consequences of her parents’ choices. You’ll find yourself at the end before you know it, still wondering if M finally found the order she craved.”

“Like virtually everything the incomparable Chilean wrote, a newly excavated trio of unarguably minor novellas, Cowboy Graves, is companionable, exotic, witty and glamorously suggestive … To an extent, the value and interest of Cowboy Graves depend on a prior familiarity with the sprawling, hyperlinked metaverse of Bolaño’s fiction … In fact, Cowboy Graves may be the most plainly autobiographical fiction Bolaño ever wrote … A primary element in the compound that keeps Bolañoites hooked is the voice: it hardly matters what it’s saying, or what the torrent of words ultimately amounts to, when it speaks so seductively (as it does in Natasha Wimmer’s dependably limpid translations) … Characters, fictional cities and real-life poets recognisable from other novels flicker briefly into sight and then vanish. Cowboy Gravesis a minor chamber in the labyrinth of Bolaño’s fiction, but it’s one with many doors.”

“If this sounds wacky, it is, but it’s wacky in the grim, smart way of a Coen brothers film. González, who lives in Argentina, uses absurdity to show us that there is the thinnest of lines between utopia and dystopia, all without ever naming any real-world correlates … An uncategorizable novel that manages to be both zany and profound.”

1. Consent: A Memoir by Vanessa Springora, trans. by Natasha Lehrer
(Harper Via)

“Consentis a Molotov cocktail, flung at the face of the French establishment, a work of dazzling, highly controlled fury… That feeling of fatedness is reinscribed by Springora the shaper of this tale, who begins the book with references to fairy tales, imagining Snow White refusing the temptation of the shiny red apple, Sleeping Beauty resisting the spindle—impossible, the tacit message … The fallout has been swift. After the publication of Consent, prosecutors opened a case against Matzneff. He was dropped by his three publishers and stripped of a lifetime stipend. This week the government announced it would instate 15 as the age of consent. By every conceivable metric, her book is a triumph.”

“To tell the story of the Black church is something of a risk even to a scholar as secure as Gates, for voices in the arena of racial justice have long diminished religion as overly safe and accommodationist … Yet Gates writes here as a historian, and the historian can chronicle progress, assess its origins and commemorate its course while noting its incompleteness. ‘Violent insurrection would have been a form of racial suicide; insurrection meant death,’ Gates writes. So Black Americans used what was at hand (faith and religiously based appeals and action) in the struggle for freedom … Relying heavily on the voices of myriad scholars and clergy members (often combined in the same person, like Kelly Brown Douglas or Jonathan L. Walton), Gates traces the story back even before Jamestown … In Gates’s telling, the Black church, too, shines bright even as the nation itself moves uncertainly through the gloaming, seeking justice on earth—as it is in heaven.”

3. How to Avoid a Climate Disaster: The Solutions We Have and the Breakthroughs We Need by Bill Gates
(Knopf)

“… a compelling explanation of how the world can stop global warming by reducing greenhouse gas emissions effectively to zero … Gates has occasionally appeared equivocal about climate and energy policies that he thought could undermine the fight against poverty and illness. However, this book lays out forcefully his understanding that the impact of climate change poses a far bigger threat to lives and livelihoods in developing countries…The book breaks down the sources of these emissions into a few broad categories—making things, plugging in, and getting around—and Gates knows how to frame issues in terms with which everybody should be able to engage, without dumbing down the material … I think readers will discover from his book that he is a serious and genuine force for good on climate change.”

4. True Believer: The Rise and Fall of Stan Lee by Abraham Riesman
(Crown)

“To give a full account of Stan Lee, as Abraham Riesman sets out to do in a new biography, True Believer, is to contend not just with his presence in popular culture (the smiling oldster in sunglasses, with a cameo in each Marvel film) but with the fluid nature of artistic collaboration, and so with endless debates over which parts of the comics are his … True Believer isn’t the first serious biography of Lee, though it is the first completed since his death, in 2018. It cannot settle every question about what, exactly, Lee did. What it does best is unfurl a Künstlerroman, a story about the growth of an art form and an artist who was also a director and a leading man, unable to admit that the show could go on without him.”

5. Radiant: The Dancer, the Scientist, and a Friendship Forged in Light by Liz Heinecke
(Grand Central)

Read an excerpt from Radiant here

“… [an] imaginative and immersive dual biography … [a] spirit of joy illuminates Radiant… a true account that reads as fluidly as a novel… Her evocation of Paris feels lush and lively … Through her affectionate depiction of these women and their milieu, Heinecke allows their spirits ‘to keep shining on with a faint but steady light, inspiring us to dream bigger, work harder and reach higher’; skillfully, seamlessly, she lets their friendship and feminism blaze again in the 21st.”