Our fingertips are among the most sensitive parts of our bodies. Bristling with nerve endings, they are in constant communication with our brains as they relay information and act on impulses; they don’t respond to our consciousness, but rather form it—ten different starting points for our thoughts and feelings.

Since Patricia Lockwood contracted coronavirus last March, she has grappled with a variety of what are considered long-term symptoms of the disease, including intense neuropathy—damage to the brain and spinal cord that often manifests as pain in the hands and feet, concentrated in the clusters of nerves that gather at these farthest reaches of the body.

“I actually feel a fiery, burning sensation,” Lockwood told me over the phone recently. “I used to be able to scroll until I couldn’t feel my fingertip.” But now, she can’t scroll at all. For a while, Lockwood—whose debut novel, No One Is Talking about This, is narrated by a woman who is, at its start, Extremely Online—could barely even hold her phone. “It’s a very poetic punishment for me, and probably a good way for me to end my online career.”

For those who have followed Lockwood’s career, it’s difficult to imagine any part of it existing entirely offline; she is one of the few writers whose voice feels either—or even both—distinctly literary or internet-y, depending on how you look at it. In conversation, her language is richly visual—“My heart was coming out of my chest, like a performing dolphin at SeaWorld” and “It was a slowly accumulating snowball of a coup” and “I looked just like a tragic raccoon”—that it can sound like she’s speaking in poetic fragments, or maybe just really good tweets.

And so perhaps it is no surprise that many people were first introduced to Lockwood either through her tweets (like her long ago query to The Paris Review: “So is Paris any good or not”) or through her poetry, which includes two books—Motherland Fatherland Homelandsexuals and Balloon Pop Outlaw Black—and that rarest of things: a viral poem. Published in 2013 on The Awl, “Rape Joke” recounted Lockwood’s own experience with sexual assault and was as emotionally eviscerating as it was shockingly funny; it also demonstrated Lockwood’s tense style as a writer.

“You are in the middle of a page that does not end; you are scrolling all the way down to the bottom; and you’re doing that inside your body.”

The inclination to share “Rape Joke” as soon as it had been read was no doubt due, in part, to its feeling of innate familiarity to so many of its readers. Lockwood’s 2017 memoir, Priestdaddy, offers a similar sensibility and crystalline sentence-to-sentence beauty, as does her other work, along with an ability to straddle the sacred and profane with ease. Its success, though, was not quite so based on its relatability—few other people outside the Lockwood family know what it’s like to grow up with a Catholic priest for a father, after all.

The success, both critical and commercial, of Priestdaddy—it was named one of the ten best books of the year by the New York Times, among other accolades—meant Lockwood suddenly had a different platform from which not only to write, but also to perform, to live; she was touring the world, speaking to larger and larger audiences, spinning and spinning and spinning, scrolling and scrolling and scrolling. And what she kept finding as she did so, she told me, was that “real life just erupted… time and time again” into everything else she was doing—including into all the time she was spending online.

In 2019, Lockwood’s sister discovered, late in her pregnancy, that her baby had Proteus syndrome, a rare and debilitating genetic disorder. Lockwood stepped further and further away from the internet as she spent more and more time with her sister and her niece, Lena, to whom her novel is dedicated, and who died when she was six months old. “You can’t really be on the internet in the same way,” she explained. “You can’t be imbibing it in the moment to moment way you were doing before, you can’t be drinking from the fountain.” This experience is reflected in the second half of No One Is Talking About This, as the novel’s unnamed protagonist, whom we first meet as she is touring the world on the strength of a viral post, spends more and more time with her sister and her niece, who has Proteus syndrome and dies as an infant.

It wasn’t initially Lockwood’s intention for her novel to be so autobiographical. This was a novel that started off as being about the internet—more specifically, about the Twitter-esque “portal,” an absurd place where the funniest user is also a dictator, and people might slip up by saying horrifying things in earnest, like that they “didn’t care that a white child had been eaten by an alligator.” The internet is a notoriously difficult place to capture in fiction, perhaps because it isn’t a place, even if it has its own language; it doesn’t stand up to scrutiny, no matter how consistent its internal logic happens to be. It’s a waste of time, but it’s where we spend all our time, even as that time becomes slippery—we have no memory of it, except those memories that live in our fingertips. It’s no wonder that so many writers are afraid of even poking at its edges.

Not Lockwood, though: “It’s almost paranoid at this point that we haven’t incorporated it into our novels and into our work in the way that we’ve incorporated it into our lives. Why are we afraid of doing that?” For her, it was important to attempt to capture the ephemerality of the online space, the experience of being a body that has spent so much time in what is essentially a thought experiment integrated into every other aspect of her life. “It became interesting to me,” she said, “because it’s like, yes, you are in the middle of a page that does not end; you are scrolling all the way down to the bottom; and you’re doing that inside your body. How does that feel? How can you write about that?”

“Are other people experiencing us as real? Is it making us more or less ephemeral?”

Lockwood never intended the whole novel to be only about the internet. “I knew that I wanted part of it to exist very much within the internet and part of it outside,” she said. “I thought we might be in space honestly—maybe some fictional thing can happen on another planet.” She laughed, remembering another idea she’d had: “Maybe I can write the rest from hell!” Instead, she said, “I wrote something that ended up being completely outside the internet, that was completely outside that scroll, but that still texturally had something in common with it.”

Lockwood began “almost compulsively writing,” she said, about the situation with her sister and her niece as it began happening. Her sister gave her permission to continue doing so. “If she hadn’t, it wouldn’t ever have seen the light of day,” Lockwood said. “It would have gone into a drawer somewhere and that would have been fine, too… But there was something that felt very right about just settling this form of the child almost exactly as she was into the cradle of the work. I felt she was protected. It was the one place I could protect her—by showing her in the work as she really was.”

There’s a part in the middle of the novel where the protagonist’s husband sees her consumed with the portal; he watches her “engage in mortal online combat with a person who had chosen, our of all combinations of words in the universe, the username “henry higgins was an abuser.” He tells her, “You have a totally dead look on your face… Like a ventriloquist’s dummy. Like a doll that haunts kids. Just totally, totally dead.” The joke is not just that “her feelings, such as they were, were hurt.” The joke is that “he was always saying things like this just when she was at her most alive.”

The joke is also, of course, that this is not when the protagonist was at her most alive. That comes later, as she spends more and more time with the baby and separates herself from the internet—from The Discourse—even as she still references online things, like the perversity of the droplets emoji and the tragedy of Harambe, acknowledging that “whatever lives we lead they do prepare us for these moments.” And those moments are ones of searing consciousness, of recognition—similar to when she was a child and had “holy feelings, knifelike flashes that laid the earth open like a blue watermelon.” The protagonist knows that even those types of life-altering moments don’t really alter your life, at least not holistically. What they do, instead, especially if they accumulate, especially if you leave yourself open to experiencing as many of them as possible, is serve as a reminder: “More and more I begin to feel that the whole world is conscious.”

That, too, is what happened for Lockwood. “It’s a novel about consciousness, it’s a novel about being awake in the world,” she said. “And there is this enormous question—what are we putting into the portal? Not just what are we pouring into it—we’re pouring our eyes, we’re pouring our minds, we’re pouring our attention—but the fragments of ourselves that we’re putting into it. Do those constitute images of our lives? Are other people experiencing us as real? Is it making us more or less ephemeral? Is it making our experiences of other people more or less ephemeral? I think that all of these questions are related.”

Lockwood found that the more deeply she prodded at these questions and felt her way through the novel, which she calls “basically a huge brain,” the more she realized that her writing was becoming a container for things—for her ideas, for the internet, for Lena—but that it wasn’t limiting. Her words weren’t constraining things by defining them; they were setting things free. “There’s something powerful and freeing in letting a work run away with you, of letting it become permeable to the entire world, of letting the world get inside of it and see what it can accumulate, see what it can incorporate.” She said she wanted to “see if this person, who is so enormous, who is as big as the entire universe, can fit. It became a question of is the work elastic enough? What can it hold?”

Just as there is no end to the internet, there is no end to our desire to get to the ultimate punchline, to touch its sharp edges and know that, because it has a discreet beginning and ending, there is also something else that exists outside of it, in addition to it. We overload our brains, we extend our fingertips toward our screens in an effort to know each other, to know ourselves. We do that without having any idea how it will end. Lockwood joked, “Maybe what we’re scrolling toward is that we as a planet, we as human beings, just go supernova.”

A supernova is the endpoint of a star’s evolution, its death throes. When it dies like this—in a blaze of luminosity; a fiery, burning sensation—a single star sheds as much light as an entire galaxy. What can be big enough to contain all that? Only the whole universe. Only the ends of our fingertips. Probably, also, a really good tweet.

Homecoming: How To Be a Returnee in Lagos 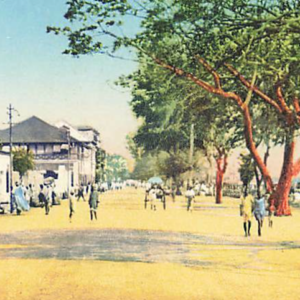 Homecoming: How To Be a Returnee in Lagos I was one of three black girls in my sixth form politics class and I was the "loud one," a label I’d been christened with...
© LitHub
Back to top