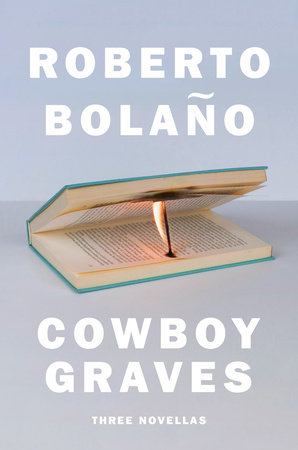 The following is excerpted from Roberto Bolaño's Cowboy Graves: Three Novellas, translated by Natasha Wimmer. Bolaño (1953-2003) was born in Santiago, Chile, and later lived in Mexico, Paris, and Spain. A poet and novelist, he has been acclaimed as “the real thing and the rarest” by Susan Sontag. Among his many prizes are the prestigious Herralde de Novela Award and the Premio Rómulo Gallegos. He is widely considered to be the greatest Latin American writer of his generation.

My name is Arturo and the first time I saw an airport was in 1968. It was November or December, maybe the end of October. I was fifteen then and I didn’t know whether I was Chilean or Mexican and I didn’t care much either way. We were going to Mexico to live with my father.

We tried to leave twice. The first time we didn’t make it and the second time we did. The first time, as my mother and sister were talking to my grandmother and two or three other people I’ve forgotten, a stranger came up and gave me a book. I know that I saw his face—I scanned the whole length of him because he was so tall— and he smiled and made a motion (at no point did he say a word), inviting me to accept his unexpected gift. I’ve forgotten his face, too. He had bright eyes (though sometimes I see him wearing dark glasses that hide not just his eyes but most of his face) and smooth skin, tight around the ears, immaculately shaved. Then he was gone, and I remember sitting on one of the suitcases and reading the book. It was an international public airport manual. From it, I learned that an airport has hangars that are rented to different airlines for storage and maintenance; passenger terminals connected by air bridges to plane parking areas; a meteorological office; a control tower usually at least one hundred feet tall; emergency services located in special units on the landing field and controlled by the tower; a wind sock (which is a visual guide for gauging wind direction— when horizontal, it indicates that the wind speed is twenty-five to thirty knots); a flight operations building containing the main flight planning offices; a cargo center; shops; restaurants; and a police headquarters where it wouldn’t be uncommon to run into an Interpol agent or two. Then we said goodbye to the people who had come to see us off and we got in the boarding line. I had the book in the pocket of my jacket. Then a voice said my mother’s name over a loudspeaker. I think the whole airport heard it. The line stopped and the passengers looked around, searching for the woman who had been called. I looked around too, searching, but I knew who to search for so I looked straight at my mother, and to this day, as I write this, I’m ashamed of having done that. My mother’s reaction, meanwhile, was odd: she pretended not to know what was going on and she looked around too, as if searching for the same person everyone else was, but not as eagerly as the other passengers on the Santiago–Lima–Quito–Mexico City flight. For a second, I thought that she would get away with it, that if she didn’t accept the inevitable then the inevitable wouldn’t happen, that so long as she kept moving toward the plane, ignoring the call of the loudspeaker, the voice would stop searching or keep searching even as we were on our way to Mexico. Then the voice called her name again, and this time it called my sister’s name too (my sister turned pale and then red as a tomato) and mine. In the distance, behind glass, I think I saw my grandmother, looking distressed or flushed, waving and pointing for some reason to the watch on her left wrist, as if to say that we had just enough time or that our time had run out. Then two Interpol agents appeared and asked us none too nicely to follow them. A few seconds before, my mother had said keep calm, kids, and when we had to follow the policemen she repeated it, while demanding to know what was going on (apparently addressing the policemen who were escorting us but actually speaking to nobody in particular), and saying they’d better not delay us because we were going to miss our flight. That was my mother.

My mother was a beautiful woman. She read a lot. When I was ten, I believed that she had read more than anyone else in our town, wherever that was, though actually she never had more than fifty books and what she really liked were astrology or fashion magazines.

My mother was Chilean and my father was Mexican and I was born in Chile and I had lived there all my life. Moving from our house in Chile to my father’s house may have terrified me more than I was prepared to admit. Also, I was leaving without having done a lot of the things I wanted to do. I tried to see Nicanor Parra before I left. I tried to make love with Mónica Vargas. I remember it now and it makes me grit my teeth, or maybe I just remember myself and I see myself gritting my teeth. In those days planes were dangerous and at the same time a great adventure, real travel, but I had no opinion on the subject. None of my teachers had flown on a plane. Nor had any of my classmates. Some had made love for the first time, but none had flown. My mother used to say that Mexico was a wonderful country. Up until then, we had always lived in small provincial capitals in the south of Chile. Santiago, where we spent a few days before flying, seemed to me a metropolis of dreams and nightmares. Wait till you see Mexico City, said my mother. Sometimes I imitated the way Mexicans talked, I imitated the way my father talked (though I could hardly remember his voice), and the way people in Mexican movies talked. I imitated Enrique Guzmán and Miguel Aceves Mejía. My mother and my sister laughed and that was how we spent some long winter afternoons, though by the end I never thought it was as funny as it had been at first and I would slip away without telling anyone where I was going. I liked to go out walking in the country. Once I had a horse. Its name was Ruckus. My father sent the money to buy it. I can’t remember where we lived then, maybe Osorno, maybe outside of Llanquihue. I remember that we had a yard with a shack used as a workshop by the former tenant and later fixed up as a kind of stable for my horse. We had chickens, two geese, and a dog, Duke, who became fast friends with Ruckus. In any case, whenever I went out riding, my mother or Celestina would say: take Duke, he’ll protect you and he’ll protect your horse. For a long time (almost my whole life) I didn’t know what they meant or I misunderstood them. Duke was a big dog, but even so he was smaller than me and much smaller than my horse. He was the size of a German shepherd (though he certainly wasn’t a purebred), white with light brown spots and floppy ears. Sometimes he vanished for days and then I was strictly forbidden to go out riding. Three or five days later, at most, he would come back skinnier than ever, with cowlike eyes, so thirsty he could drink half a bucket of water. A little while ago, during a nighttime bombing raid that ended up not amounting to much, I dreamed about Duke and Ruckus. Both of them were dead and I knew it. Duke, Ruckus, I called, come here and get in bed with me, there’s plenty of room. In my dream (I realized this immediately, without waking up was putting on a Chilean accent just as I had once put on the accent from Mexican movies. But I didn’t care. I just wanted my dog and my horse to come into my room of their own accord and spend the night with me.

My mother was a beautiful woman. She read a lot. When I was ten, I believed that she had read more than anyone else in our town, wherever that was, though actually she never had more than fifty books and what she really liked were astrology or fashion magazines. She bought books by mail, and I think that’s how Nicanor Parra’s Poems and Antipoems turned up at our house, or at least I can’t see any other way it could’ve gotten there. I guess whoever packed up the books for my mother put it in by mistake. At our house the only poet anybody ever read was Pablo Neruda, so I kept the Parra book for myself. My mother used to recite Neruda’s twenty love poems (before or after my Mexican impersonations) and sometimes the three of us ended up crying and other times— only a few, I admit— the blood rose to my face and I yelled and escaped out the window, feeling sick and ready to vomit. My mother, I remember, read like a Uruguayan poet I had heard once on the radio. The poet’s name was Alcira Soust Scaffo, and just like me trying to imitate the way Mexicans talked, my mother tried to imitate the voice of Madame Soust Scaffo, which could swoop in a heartbeat from shrill peaks of despair to velvety depths. On a few horrific nights, my sister did a Marisol imitation, so as not to be left out. Sometimes I think about Chile and I think that all Chileans, at least those of us who are alive and who were more or less conscious in the sixties, deep down wanted to be impersonators. I remember a comedian who became famous for impersonating Batman and Robin. I remember that I collected Batman and Robin comics and thought his impersonations were crude and sacrilegious, but I still laughed, and later I changed my mind and I didn’t think they were so crude and sacrilegious anymore, just sad. One time Alcira Soust Scaffo came through Cauquenes or Temuco, or near where we lived, one more stop on a long tour of theaters in the south of Chile, and my mother took us to see her. She was very old (though on the few posters that we saw in the Plaza de Armas and around the town hall, she looked young and serious, with a hairstyle that must have been fashionable in the forties) and her voice, heard live without the kindly mediation of the radio, made me nervous from the start. This evening of verse was interrupted several times, I still don’t know why, maybe for health reasons. After each interruption, Alcira Soust Scaffo returned to the stage whooping with laughter. My mother told me that she died soon afterward in a mental hospital in the city where she was from. After that, I couldn’t stand Neruda. At school back then, they called me the Mexican. Sometimes it was a nice nickname to have, but other times it was more like an insult. I preferred to be called El Loco.

Amari and the Night Brothers by B.B. Alston, Read by Imani Parks 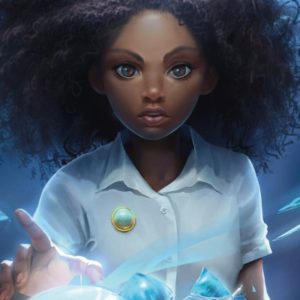 Amari and the Night Brothers by B.B. Alston, Read by Imani Parks Every Monday through Friday, AudioFile’s editors recommend the best in audiobook listening. We keep our daily episodes...
© LitHub
Back to top