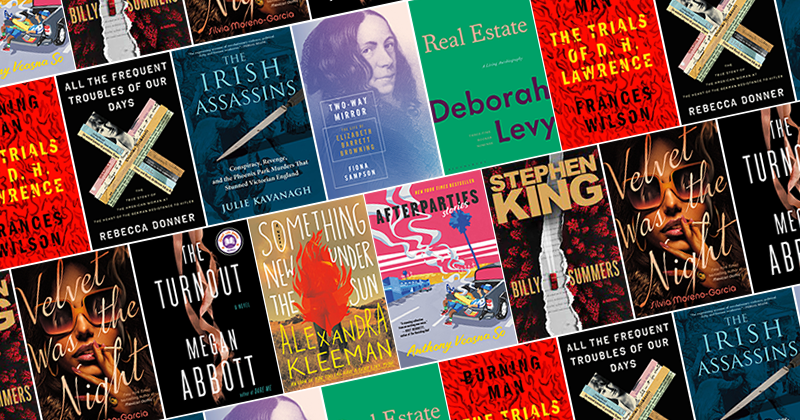 Here are the best reviewed books of August.

Stephen King’s Billy Summers, Anthony Veasna So’s Afterparties, Deborah Levy’s Real Estate, Alexandra Kleeman’s Something New Under the Sun, and Megan Abbott’s The Turnout all feature among the best reviewed books of the past month.

Read an essay about the late Anthony Veasna So here

“[A] remarkable début collection … So is hardly given to stoic silences. The young people in Afterparties spill forth with language … So skillfully conjures the rhythm of conversations … It feels transgressive that Afterparties is so funny, so irreverent, concerning the previous generation’s tragedy … His sentences are brusque and punchy, and there’s an outrageous, slapstick quality to his scenes. But the stories often end on a haunting note, resonating with the broader consequences of leaving or staying.”

“It meanders, it pays only the scantest regard to the rules of narrative structure, it indulges gladly in both casual stereotyping and naked political point-scoring. And it’s [King’s] best book in years … King has always excelled at sketching everyman’s US, enriching the details into a minor epic register. It’s what elevates him above his genre peers, and it’s in full force here … By the inevitable, biblical climax, unlikely plot contrivances or dated sexual politics are forgiven, because we can’t help but be won over by the eternal figure of the lone individual making a stand … He may always be considered a horror novelist, but King is doing the best work of his later career when the ghosts are packed away and the monsters are all too human.”

3. Velvet Was the Night by Silvia Moreno-Garcia
(Del Rey)

“Throughout her career, the style-shifting novelist Silvia Moreno-Garcia has demonstrated a remarkable ability to employ the tropes of genre fiction while simultaneously subverting and decolonizing them … Velvet Was the Night her riveting new noir, is an adrenalized, darkly romantic journey set during Mexico’s Dirty War … Moreno-Garcia keeps us guessing … Moreno-Garcia always leaves her own indelible stamp on any seemingly familiar genre.”

Read Megan Abbott on the photographers who inspire her here

“Desire and ballet are entwined in a smoldering pas de deux throughout this tightly choreographed thriller … Anyone who has ever attended a performance of Tchaikovsky’s famous ballet will enjoy the myriad references to Dewdrops, Snowflakes, mice and toy soldiers as the novel whirls along … Abbott’s interpretation of Clara/Marie as an adolescent riven by erotic awakenings is cleverly based on Hoffmann’s story … At times, the plot’s inevitable murder, sexual intrigue and family secrets seem almost incidental to the auditions and rehearsals, the bickering dancers and complaining parents, the punishing toe shoes and pulled muscles. Though it’s soon apparent that The Turnout is as much about female rage, jealousy and sexual desire as it is a suspense novel set in a dance studio.”

5. Something New Under the Sun by Alexandra Kleeman
(Hogarth)

“If we are prepared to see the air let out of Patrick’s tires a little bit—maybe more than a little bit—well, that’s largely because a million other books and movies and TV shows about Hollywood have led us to expect as much. Kleeman’s eye is deft enough, her senses of satire and proportion sufficiently stropped, that I wouldn’t have minded if that’s what she did. Her descriptions of Cassidy’s filmography and of Patrick’s bibliography are plausibly funny—or rather, are just implausible enough to be funny—and her ear for the cinephilic bickering of the PAs and the greasy reassurances of the producers are likewise on point. It’s tempting, at the beginning of the novel, to relax, to settle in for the ride that will lead Patrick Hamlin toward his inevitable comeuppance … Kleeman’s great skill, and this novel’s abiding triumph, is how seamlessly she blends the horrific with the mundanely troubling, the ridiculous—or the impossible—with the ordinarily absurd … Kleeman’s unraveling of this plot is satisfying enough, but she’s no more interested in writing a noir than she is a conventional Hollywood satire. What is really happening here—what Kleeman has ultimately in mind—should be kept under wraps to some extent, but it’s worth noting that the world she describes, despite its occasional exaggerations, remains a canny mirror of our own.”

“[A] wonderful new book … Levy, whose prose is at once declarative and concrete and touched with an almost oracular pithiness, has a gift for imbuing ordinary observations with the magic of metaphor … The new volume, which follows the death of one version of the self, describes the uncertain birth of another … She herself is not always a purely likable, or reliable, narrator of her own experience, and her book is the richer for it.”

“… the feeling you get reading Frances Wilson’s Burning Man … The flare of a match, a man on fire, raging, crackling, spitting, consuming everything and everyone around him. Wilson too is on form and on fire … I’m not totally convinced the Dante business works. Wilson’s voice is so appealing—confiding, intelligent, easy, amused—I would happily have read a straightforward blaze through the life, cradle to grave, basket to casket … This is a red-hot, propulsive book. The impression it leaves is of Lawrence not so much as a phoenix (his chosen personal emblem) rising from the flames, but of a moth coming too close to a candle and, singed and frantic, flying into and into and into the wick.”

3. All the Frequent Troubles of Our Days: The True Story of the American Woman at the Heart of the German Resistance to Hitler by Rebecca Donner
(Little Brown)

“… astonishing … turns out to be wilder and more expansive than a standard-issue biography … a real-life thriller with a cruel ending … Donner writes sensitively about Mildred’s travails while also describing how women were expected to serve a Nazi regime dedicated to the idea that ‘the role of women is to populate Germany with good Germans’ … so finely textured that I can’t even begrudge Donner’s decision to narrate events in the present tense; a choice that can sometimes seem like a stagy effort to amp up the drama instead comes across as an effective device for conveying what it felt like in real time to experience the tightening vise of the Nazi regime … Amid all the tension and the horror, Donner has an eye for stray bits of grim comedy.”

“What Julie Kavanagh has done here is to bring this most extraordinary of assassinations to life … The research is meticulous. There are some 150 pages detailing all of the interested parties and the history behind the political situation in London and Dublin before we even get to the murders themselves … It’s not all dry historical record either. Rather, Kavanagh casually drops in those personal details that bring characters and history into the real world … Crucially, the details of private correspondences, personality traits and personal grievances are not mere salacious ornamentation. They are essential to the provision of a true picture of what led to the murders and their aftermath … The writing is clear and yet warm, leaving the reader in no doubt as to how much personalities, foibles and mere coincidence affect law, politics and history … This is one of the best researched and most enjoyable historical reads I have come across in quite some time.”

“Sampson overturns old misogynist assumptions, establishing that it was Barrett Browning’s tremendous literary success that brought her and nascent poet Robert Browning together … Sampson sensitively elucidates how Barrett Browning’s unusual life shaped her imagination and social consciousness. As she tracks the creation and reception of each of her groundbreaking books, including Sonnets from the Portuguese, she astutely uses Barrett Browning’s revolutionary masterpiece, Aurora Leigh, a novel-in-verse about a woman poet claiming artistic and personal freedom to frame this gleaming two-way mirror reflecting Barrett Browning and her profound and extraordinary oeuvre.”