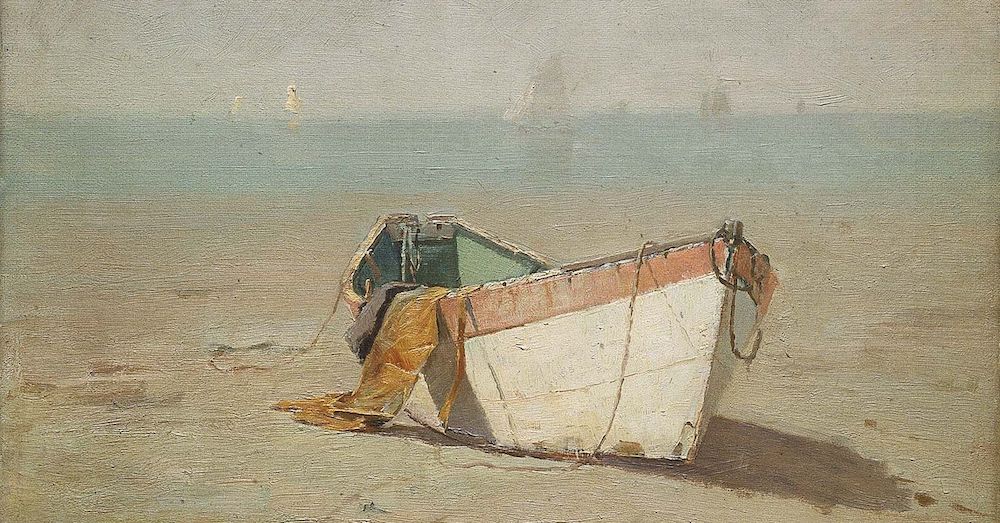 Thomas E. Ricks on the Shadows at the Edge of Updike's Work

As long as I can remember, I have loved boats and words.

When I was about two years old, I was with my parents and three siblings in an eatery in Essex, Massachusetts. It was named “The Village Restaurant,” but by my mother still called it “Wimpy’s,” its previous name. I once was told that the restaurant was started by a woman who had sometimes cooked for my politician grandfather’s dinner parties, and partly with money he lent her. I still remember her mashed potatoes, which in retrospect must have had a very large quotient of butter and cream.

At the restaurant I looked out the big window at the Essex River boatyard across the road and down a slope. It is now a museum of shipbuilding. I pointed and, for the first time in my life, spoke. It was sometime in 1957, about the time that John Updike was moving into a small house a few miles to the north of Essex. “Boat,” I announced. It was my first word.

Essex was part of Boston’s north shore that the new Rte. 128, the nation’s first “beltway,” had six years earlier put in easy commuting distance of Boston. These new and unsettled suburbs, layered over old Puritan towns, provided the setting of Updike’s novel Couples. There are just a few books I have read three times (Robert Graves’ Good-Bye to All That comes to mind, along with Shakespeare’s tragedies, but not much else), but Couples is one of them. Updike has been criticized as a stylish miniaturist, but I think that in that novel about a group of young married couples in the early 1960s he captured the feel of the transition from the Eisenhower era into the Kennedy years and the cusp of the 1960s. The adults think they are so suave yet are painfully innocent about life and its costs.

It was only recently, when reading Adam Begley’s biography of Updike, that I realized how much Updike and I breathed the same disconcerted air in those years. My father, the son of a Wyoming cowhand, had been catapulted upward by the GI Bill, and had begun teaching at Harvard about the time Updike was an undergraduate there. Updike began work at the New Yorker a few weeks before I was born. When I was two years old, he moved with his wife to Ipswich, the town just north of Essex —and indeed his first house there was on Essex Road. Today the Cape Ann peninsula is just the fringe of Boston, but back then it was a new land. It was to me a lovely, rich mix of beaches, salt marshes, pine groves, polo and golf clubs, and occasional rocky headlands.

Updike’s beaches were my beaches—Crane and Wingaersheek, both located between Gloucester’s rocks and Ipswich’s marshes. As newlyweds, Updike and his first wife had worked at the YMCA Family Camp on Lake Winnipesaukee, New Hampshire, while my family around that time spent a week of the summer at Squam Lake, the next body of water to the west.

My mother told me that once at a cocktail party, Updike poured a drink down the front of her dress. She was not sure if it had been on purpose.

With his second wife, Updike moved to Beverly Farms, just south of where we lived in Essex, and just east of the hospital where I was born, on the eastern side of Essex Street (yes, a different one). My great-grandfather, William Russell, summered a mile to the east, on Coolidge Point. When old and wealthy, Updike spent some of his royalty payments golfing at the venerable Myopia Hunt Club, where my grandparents sometimes took me to dinner when I was a child. I always had the roast beef and mashed potatoes, which to my childish self was the height of luxury.

My mother told me that once at a cocktail party, Updike poured a drink down the front of her dress. She was not sure if it had been on purpose. (My mother’s chest features in another family story, when she complained to McGeorge Bundy, then dean of faculty at Harvard, about her husband’s salary—I believe that in 1960, he was making $6,000. He allegedly pointed a finger at my mother’s ample breasts and said, “He’s a psychologist? There’s a world of grant money there. All he has to do is pick a teat and suck!” Soon thereafter he headed south to Washington to be John F. Kennedy’s national security advisor, where he helped enmesh our country in the Vietnam War.)

I first encountered Updike’s work in college. Couples, published in 1968, five years before I became a freshman, was a revelation to me. This was a writer. Yes, his subject matter sometimes was minor, but that made the skillful prose all the more luminous. He has a great eye, and ear. “Sometimes in these warm pale nights, as the air cooled and the cars on the road beyond the lilac hedge swished toward Nun’s Bay trailing a phosphorescence of radio music . . . .” Or, more simply, “Adultery lit her from within.” The windshield of an “old maroon coupe [is] aswarm with reflected branches and patches of cloud.” A man holds a cocktail: “Ringlets of vibration, fine as watch springs, oscillated on the surface of his Gibson as he laughed.”

For some reason I have for decades associated Updike with an experience I had in the summer of 1960 or 1961. It was the first time I saw adults scared, and it was a revelation to me. I believe it was the Fourth of July. My parents drove us all (five children, then) over to Marblehead to a big shingled house overlooking the harbor, which was filled with yachts and partygoers. We were parked in a basement playroom with some strange children we didn’t know, and were told to keep ourselves busy. My parents went to the cocktail party out on the lawn. This all struck me as terribly unfair, especially as I knew they were going to get out for a boat ride.

About two hours later my parents returned, ashen faced, and quickly herded us into the family station wagon. On the ride home my mother told us they had been taken out on a racing yacht their host had just acquired, I think a Lightning, a small, fast sloop. As they were heading toward Lighthouse Point, near the harbor’s mouth, crowded with holiday boats, a squall rolled through and a gust filled the sails. The Lightning responded just as it was designed to do, leaping forward and holding its accelerated speed. Doing so, it poked its bow into the side of a cabin cruiser. The new skipper had just learned an expensive lesson about boat-handling.

In retrospect, one benefit of being a member of a big family is that it is possible to get lost in the small crowd of siblings. Sitting in the back seat on that ride home to Essex, I looked out the car window and contemplated my parents’ state. Observing them, I sensed that the people put in this world to take care of me were not always capable of looking out for themselves. It was a powerful lesson: watch out for myself. It took a decade or more for some of my peers, cushioned by money, to learn that lesson.

My parents sometimes had an inattentive otherworldliness to them. At about this point in my life, they headed off to a dinner party given by a couple they knew and liked, but found rather stiff. They were served what they considered, to their surprise, a pretty casual, thrown-together meal. They were also puzzled that no other guests were invited. They found out months later that they had shown up on the wrong night.

As I write this, it occurs to me that it might be an interesting exercise to re-write Couples from the perspective of the children kept on the periphery of the story. My friend, the dance critic Suzanne Carbonneau, says that the problem of children in Updike’s novels is crucial, because it is “the place where his morality diverges so painfully from his aesthetics.” The children never get the attention they deserve, because the Updike-like heroes need so much. One of the side effects of this narcissism is that children in his writing seem to be afterthoughts, and sometimes impediments. I got the sense from the Begley biography of him that that is how he sometimes thought of his own offspring—they understood that the books came before them.

At one point in Couples, one half of an adulterous couple contemplating having sex on a pile of dirty clothes in a basement laundry room in a house on the outskirts of Ipswich looks up at the cellar window to check if a “child’s watching shadow cleft it.” I would have been seven years and eight years old in the year in which the novel is set, from early 1963 to early 1964. That might have been my shadow there.

And yes, I now have my own sailboat.

Thomas E. Ricks is the author of several books, including Churchill and Orwell: The Fight for Freedom, The Generals, The Gamble, and the number one New York Times bestseller Fiasco, which was a finalist for the Pulitzer Prize. He is also a military history columnist for the New York Times Book Review and a visiting fellow in the history department at Bowdoin College. Previously, Ricks covered the US military for The Washington Post from 2000 through 2008. Until the end of 1999 he had the same beat at The Wall Street Journal, where he was a reporter for seventeen years. A member of two Pulitzer Prize-winning teams, he covered US military activities in Somalia, Haiti, Korea, Bosnia, Kosovo, Macedonia, Kuwait, Turkey, Afghanistan, and Iraq.

Meet the Man Brought to Trial for Murdering the English Language 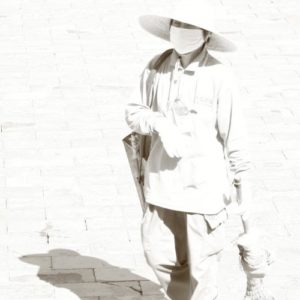 Three and a half years ago, I left home and my man in New York to “move home” to Hong Kong. Many of my generation have...
© LitHub
Back to top