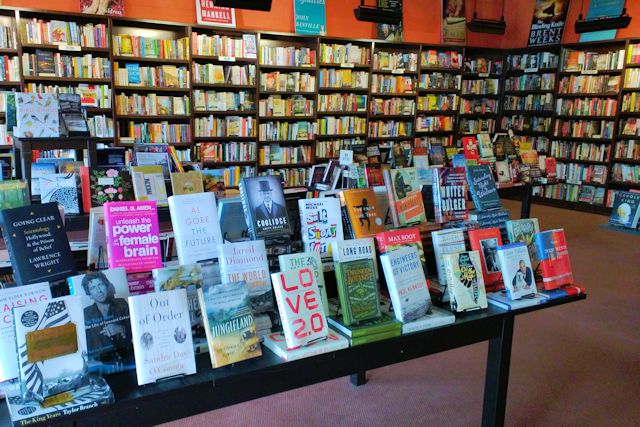 The next stop in the anti-HB2 book tour

When HB2 passed, Flyleaf Books showed its opposition to the law by incorporating a rainbow into its logo. At our reading on Saturday, customers were met by activists gathering signatures for a petition against the law. Inside the store, staff had lined up several book spines to form a rainbow display, and after the reading, they even fed us rainbow cake! Like Scuppernong, in the wake of bigoted legislation, Flyleaf is doing everything possible to make clear that it’s a safe space for everyone in the spectrum. We each read a passage from our books, then had a brief conversation before opening things up for a Q&A.

Garth Greenwell: We talked a lot about the need for multiple narratives in the Q&A at gorgeous Flyleaf Books in Chapel Hill, and about the pressure put on queer writers to write, or not to write, certain kinds of stories. We should be past coming out stories, readers sometimes say, or haven’t enough AIDS novels already been written, or—I’ve heard this several times in the last months—why are gay guys still writing about sex in bathrooms?

I don’t have a lot of patience for these comments, which seem to me problematic on all levels, not least in the fundamental assumption that the major narratives common to many queer lives—coming out, say—are somehow less compelling, or less amenable to variation, than the narrative patterns common to straight lives. I’ve never heard anyone say, Oh, haven’t we had enough stories of a man and woman falling in love? Or Oh, enough with raising kids already, where are the new stories?

The fact is there isn’t a single narrative of any of these things—coming out, living with AIDS, cruising, having kids; all of them are endlessly inflected by the particular circumstances of specific lives. The goal of any genuine project of political liberation, or so it seems to me, should be the multiplication of models of life that are seen as legitimate. In the same way, any vision for queer literature should have as its aim the multiplication of valued narratives and voices. To do this, we have to resist any declaration that our common stories have been adequately told, as if that were possible.

Supporting queer literature also means seeking out and making a space for ever more diverse voices. There was a wonderful question at Flyleaf (it was repeated the next day at Malaprop’s) about what we can do to support underrepresented queer voices: voices of queer writers of color, of trans writers, of queer writers from rural America and from other parts of the world. There are complex answers to that question, but there’s also one that’s very simple: buy their books, read them, talk about them. Here are a few suggestions, in no particular order–and bless Flyleaf and Malaprop’s for having some of them on-hand:

Chinelo Okparanta, Under the Udala Trees

Thomas Glave, Among the Bloodpeople

Garrard Conley: I spent my evening after our reading in Chapel Hill with a lesbian couple that had moved to the triangle region decades ago. They spoke of how years ago they used to rely on small zines and personal recommendations for gaining access to great LGBTQ literature. Some of this culture is going away now, one of the women said. The movement is being flattened out. We each filled our glasses with wine, and our host, Mimi, the mother of a friend of mine from grad school, began brewing strong Cuban coffee, and it seemed as though the conversation might continue indefinitely, this insider knowledge being passed from one queer generation to another, so that I soon found myself in a sudden tipsy haze, thinking of something Garth had said earlier that day during our joint reading at Flyleaf Books: that marriage equality, though necessary in making space for a certain kind of “traditional” queer family unit, carried with it a dangerous normalizing effect on the overall queer experience. Garth illustrated this idea with an example of a British journalist who had once asked him why, in the beginning of his book, he chose to write about transactional sex between two men in a public bathroom. Don’t we have enough gay narratives that begin and end with sex? the journalist asked. Aren’t we past this moment in history? And Garth had offered in response an eloquent defense of gay sex, of queer bodies, of imbuing gay stories with dignity rather than shame. In our Q & A at Flyleaf, Garth proposed that writing about queer sex in an aesthetically engaging way is in fact a radical act that can lead to a certain kind of progress, one that doesn’t necessarily fit into the traditional straight narratives we queer writers have been taught all our lives. As someone who wrote a book about just how dangerous it can be to erase essential aspects of queer lives, I agreed with Garth.

After the reading, as Garth drove us back to our hotel, I said something about how beautiful I found the houses in Chapel Hill. I was hoping to lighten the mood.

Garth didn’t entirely agree, at least not in the most essential way. We went on to discuss whether or not it was right to find these houses beautiful, given the history of the South. So much of this beauty is built on lies, we agreed. Yet I couldn’t help myself: I wanted to find beauty in these spaces even if they were lies, perhaps because I have had to bend so many of my notions of beauty to fit the life I’ve been given. After my parents sent me into ex-gay therapy, I tried to find some beauty in my horrible experiences. After learning so much about my family’s history in the South, I tried to reconcile the nice people I knew with the ancestors who had most likely brutalized black bodies. I have always wanted to believe that these people and places are never beyond repair.

Americans don’t want to believe something can be broken, Garth said in one of our readings. And he’s right. Perhaps part of what we have to do as Americans is to sit in these broken places and listen to their real histories, histories that we often don’t want to hear. Shame is something Garth and I both write about, the kind of shame that has shaped who we are as people. “America, look at your shame,” James Agee wrote in his famous essay on race riots in our country. Articulating shame, especially the kind of shame so prevalent in the South, is a necessary corrective to the types of stories that seek to normalize the brutality of the past.

I said goodbye to the couple and walked out of Mimi’s house that night with a heavy heart and stumbled into bed, wishing for oblivion.

Read about Garth and Garrard’s first stop at Scuppernong Books. 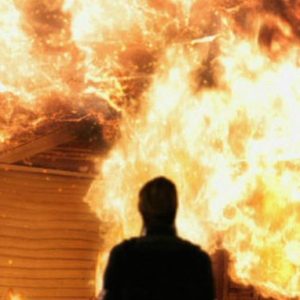 In William Faulkner's great trilogy of novels—The Hamlet, The Town, and The Mansion—he tells the story of the Snopes...
© LitHub
Back to top