“I think you know what you’ve done,” my father said over the phone, so angry he was almost unable to continue. “You think I didn’t recognize myself in that story you wrote?”

I did not grow up knowing my father, but I did have a brief friendship with him when I was eighteen and we both lived in New York City. For our first Father’s Day together, I, being extremely poor, printed out and hand-bound a collection of my short stories, since he had never read my work. I took him out to brunch, presented him with his little gift. It was fine. Cute. But then he stopped returning my calls.

After about a month, I finally caught him on his landline and asked what had happened. What had happened was that my father had assumed that a story I wrote about an overweight, red-haired zookeeper was about him. Never mind the fact that the zookeeper was a deeply awesome character and he should have been completely flattered, the issue was that the zookeeper wasn’t him. In fact, I had written the story before I reconnected with my father. The single detail that had led my father to believe the story was about him was that both he and the character smoked the same brand of cigarettes.

This was pretty much the end of my relationship with my father. As it turns out, people do not like to be written about. They don’t even like to suspect that you are writing about them. They don’t like it even if you aren’t actually writing about them and it was all a big misunderstanding.

I had always wondered, as a student of literature, why so many authors made a point of how completely non-autobiographical their work was. I had thought it was because they were proud of their imaginations. But the older I get, the more I suspect it was to ward off the hurt feelings of every person they had ever known.

I do not write plots that are autobiographical, or even biographical of the people I have known. But I do steal details. I steal them obsessively. In fact, it is possible that my entire career writing fiction is in fact a fanatical love affair with detail. I steal houses, bowls on counters, perfumes and scents, phrases, anecdotes, realizations, jokes, car accidents, dogs, meals, clothes, plants. It is a metaphysical form of kleptomania.

“Can I steal that?” is a question that I ask of people on a daily basis. My husband, bless his sweet, pure heart, always laughs delightedly, and says, “Sure!” It does not bother him when I steal from his life. I stole our first date and put it in a book. I stole his weird reverence for the band Boyz II Men. I have also told the story of our courtship in personal essays. He accepts this about me.

In the same way that the blue booby bird brings bits of blue trash to his mate for her nest, my husband offers up to me delectable details. For instance, when he was a child, he was convinced that the best job in the world had to be being the parking attendant at the beach: he lived right at the beach in that little hut, he had a big roll of money, he seemed to own the entire beach. “That’s who I want to be,” he thought. You simply cannot make up something that good.

My poor mother has suffered a similar fate, as has my best friend. When they see bits of their lives in my work, they are excellent sports. Sometimes they even say, “I’m so glad you used that.” They do not ever think that my characters are supposed to be portraits of them because they know how I work and how I am. But not everyone has enjoyed my thieving.

Ex-boyfriends, in particular, do not enjoy any kind of thieving at all. Even when it is clear that the character in question is not a portrayal, they intensely dislike having details from their lives woven into fiction, even if all I have stolen is the idea of someone working a certain job, or being interested in a certain book. It is like my father and the brand of cigarettes. It does not matter that thousands of people smoke that brand of cigarettes: to them, they are the only ones who have ever smoked that brand, and I have stolen it from them.

I am not without sympathy for their dislike. I have dated many writers, and so I have had many things written about me. In fact, I have appeared in novels, short stories, and essays in the thinnest of fictional veils. What is always most painful to me about these portrayals is the details they get wrong.

Another lover decided to recount my experience dieting and re-wrote my weight loss as not forty-five pounds, but almost one hundred pounds! He described at length her “new” beauty, and had my character taking endless photographs of herself in lacey camisoles, etc. It was, frankly, a little funny, in addition to being insulting. What was left out entirely was the real truth of that transformation, which had more to do with finding my own physical strength, my endurance, myself as an athlete, of understanding how to be a body in a moment instead of operating strictly as a floating head with a troublesome physical container.

There is something undoubtedly icky about reading these renderings of myself. And I am sure the details I steal and the details I leave out are what bother my old lovers as well. But the key difference seems to be that I never questioned their right to write of me as they would, whereas I get letters accusing me of plagiarism for a snippet of dialogue reminiscent of a drunken pseudo-philosophical discussion. I get fathers who would rather not be my father anymore over a packet of fictional cigarettes.

It is odd, in a way, to term such transgressions “stealing.” After all, nothing has actually been stolen. I know firsthand that nothing my old lovers have written about me has taken a single thing from me. My life is unalterably my own. Nor is the violation to be found entirely in taking something private and making it public. I doubt anyone but me can recognize my life in the fictions my lovers have produced. Instead, what seems to be most upsetting is seeing oneself as a Frankenstein: the true and the false sewn together in something that is a likeness without being a portrait. What the artist has done is not steal, so much as counterfeit, and what bothers the subject is perhaps only the cloying, etheric odor of the unreal.

There is, of course, another cultural paradigm for talking about this process of converting life into art: immortalization. I think of Lesbia, the poet Catullus’s lover and muse. Fully one quarter of his surviving poems are about her. I was not taught that Catullus stole from her, but instead that he had immortalized her, and I never questioned the glamour and gravity of this activity.

Women, it would seem, have grown used to being immortalized, or stolen from, whichever term you deem more apt. Our thighs are borrowed to make up the painting of a goddess. Our mannerisms and inner thoughts are on loan to the great men of literature. I never questioned that my old lovers had a right to do this to me, because the template for this behavior was as old as civilization itself.

I do not mean to imply that the problem of writing about people is entirely gendered, only that perhaps when feminists describe the “male gaze” part of what they are discussing is this same theft: surrounded by depictions of ourselves that have been consciously or subconsciously edited, our own understanding of ourselves becomes corrupt. We are no longer able to tell the difference between the fact and the fiction.

Maybe Catullus stole from Lesbia. Or maybe he immortalized her, rendered her for posterity, created her over as a character that could live forever.

Forever is, I think, at the heart of my detail collection. There are some things so wonderful, so beautiful, or so terrible, that I feel they must be kept, pinned down, saved from the maw of oblivion. I keep whole files on my computer of details: the series of thoughts I had with my son at the beach, descriptions of the smell in my grandmother’s house, funny things people said, the names and descriptions of people I went to grade school with. I am a creature obsessed with remembering. I remember discovering when I was in my twenties and had no television that I could just lie in my bed and remember things for hours. This activity, this kind of deep, Proustian revery, is, I think, the bread and butter of most fiction writing.

Personally, I am not sure if it is my duty or my vice. But I do know that I cannot and will not stop doing it. Anne Lamott advised to “write as if your parents are dead.” And maybe that is the real crux of it: that writers are always writing as though, not only their parents, but everyone they have ever known is dead, as though they themselves are dying, as though everything is about to be erased and they must salvage one burning thing from the wreckage.

Rufi Thorpe, author of The Knockout Queen, received her MFA from the University of Virginia in 2009. Her first novel, The Girls from Corona del Mar, was long-listed for the 2014 International Dylan Thomas Prize and for the 2014 Flaherty-Dunnan First Novel Prize. A California native, she currently lives in Los Angeles with her husband and sons. 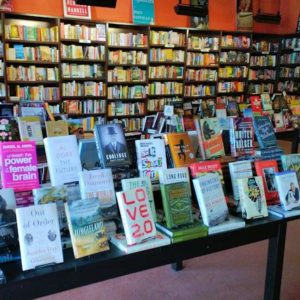 When HB2 passed, Flyleaf Books showed its opposition to the law by incorporating a rainbow into its logo. At our reading on...
© LitHub
Back to top