I don’t know if I believe in modernist literature any more. This writing once meant more to me than any other kind, but now I am wary of it. I see it as a vision of humanity primarily built around meaninglessness, cerebralism, incompleteness, and illness. It is a literature about futile quests and a search for identity that is only meagerly fulfilled. It is often referred to as “dark.” For much of my life these values felt innate to me, and now they are alien.

What I mean by “modernist literature” is a group of canonized authors who made a literary movement out of the trauma, longing, depersonalization, chaos, and futility of a modernizing world. These writers lived through the transformation of society on an unprecedented scale, as well as through a war larger and more horrific than any their civilization had previously seen. They lived through the breakdown of the political systems that had dominated their societies, and they saw seismic shifts in their culture and social milieu. In response, they made literature that spoke to an attempt to make meaning from this unsettling reality.

Beyond that, these writers were largely shaken to the core by their own personal traumas. For instance, there was Virginia Woolf, whose manic depression led her to take her life after years of turmoil; there was Kafka, who was fundamentally broken by a sense of wrongness and who perished of an awful disease; there was Gertrude Stein, whose sexuality was misunderstood, hated, and excluded from “normal” society, and who likely suffered from mental illness; and there was Rilke, who was conceived as a “replacement” for his dead sister, and whose childhood was filled with illness. The list goes on.

This literature made complete sense to me, because my life was also marked by enormous, ongoing trauma. I had grown up understanding that I was wrong, I was unloved, and I would never be able to access my true self. Much of this trauma stemmed from being forced to grow up and live as the wrong gender, and it also stemmed from a dysfunctional family dynamic that left me frightened for my safety and incapable of discovering who I was. Because of these enormous developmental traumas that I had never recognized or understood—much less healed from—when I saw the modernists portraying their own trauma in their literature, I felt understood.

Rilke’s only novel, The Notebooks of Malte Laurids Briggs, was one of the first things that made me feel seen as a transgender person: so much of the book perfectly captured my life of secrecy, masks, and longing as a closeted transgender woman. I remember how excited I was as I read it, because I was finally reading an author who felt like he really understood what it was like to be me.

Back in those days, I did not ever believe I could have what I wanted. Because of this, I had long since numbed myself to my emotions as a means of escaping the pain of living a false life. I learned to make due with a life of envy, secrecy, and longing, because I thought it was the only possible life. The numbness that got me through such a life meant that my world had no inherent meaning. I was incapable of understanding why anyone would pursue happiness—I always knew I’d live with a pain that could never be expressed nor healed. The modernists were so comforting to me for how they turned lives of futility into lives of heroism. It was instructive to watch them build their own meaning out of existentialist philosophy, how they learned to cherish their pain and longing because they did not believe they had another choice.

Because I have made this journey, I now know the power of understanding your life story. Once, I had been stuck inside this narrative, as helpless and confused as a Kafka protagonist.

Now everything is different for me. I have become the person I always should have been, and I no longer live in that numb world of irremediable pain. My beliefs and values have changed so radically that modernist writing no longer touches me as it once did. I can still admire the artistry and determination of the work, but my experience of it has lost something vital.

For me, the turning point was when I changed my gender. I finally understood that the gender the world had assigned me based on my sex organs was incorrect, and I finally began living as the gender that I had truly been born as. As I made this journey, I also began to understand the profound trauma of what had been done to me, and how this trauma had shaped my personality and behaviors. Slowly, as I more and more came to live the life that I always should have had, I began to unpack this trauma. I surfaced all of these things that had been repressed, and once they were brought to the light I began to heal their damage. In order to pursue this health, I began changing my beliefs about life. Central to these beliefs were what I had learned from the modernists.

I remember very well when I realized what was happening. It was my first female birthday. At that point I had been living as a woman for nearly seven months, and it had been a few years since I had come out as transgender and had begun feminizing my life in various ways. I woke up early in the morning and took a long, languid bath, and as I sat in the still dawn light I began to read Rilke’s “Sonnets to Orpheus.” It was writing that I had read before and cherished, writing that had once made me feel truly understood and explained, but as I read it then on my birthday the work did not touch me. The poetry didn’t settle into my bones, it didn’t nestle into the folds of my brain with the reassurance of comprehension. Instead, I felt disconnected from it.

On that morning I began to understand that the modernists had once made sense to me because I had lived with an overflowing fount of pain and an enduring sense of dislocation—but now that I was developing my correct body and assuming my proper place in the world, these feelings were fading. They were slowly being replaced with satisfaction, rightness, healing, health. I was revising the language I used to speak about my world, and I was developing a new stance toward life. For the first time in my life I felt grateful to exist, and I believed that happiness was a worthwhile goal that I should pursue. Even though my life was very far from ideal—I still had so many body issues, and strangers regularly exoticized me and treated me like a specimen—but the change in my perspective made a fundamental difference.

Because I have made this journey, I now know the power of understanding your life story. Once, I had been stuck inside this narrative, as helpless and confused as a Kafka protagonist. I did not know my beginnings, and nor did I understand what had been done to me. I didn’t know my own mind, and nor did I possess my body. But I found the means to step outside of this narrative so that I could examine and understand it, and once I saw my life story for what it was I began to reshape it, in the process transforming who it had made me into. That is what I am doing with my life now. The trauma that has marked me runs incredibly deep, and it will always shape the physical reality of my brain to some extent. But I am learning to understand what it has done to me, to be gentle with it, to not be its captive.

Because of that, I read different things now, and I read differently. For a couple of years I’ve kept my distance from all of those books that once were my entire world. I see them there on the bookshelf, and I wonder if I should get rid of them. I feel a kind of guilt, as though I am betraying them by not admitting them into this new life. I wonder if I need keep my distance from them, or if I can bring them into this new life I am creating. I think I’d like to try reading them again one of these days. I think there is a way for us to coexist, and for me to get different things from them. But not yet. I have spent so much of my life in their world, and now I see that there is so much more to life to explore. That is the life I am living right now.

How the Trump Presidency Became a Hotbed of Conspiracy Theory 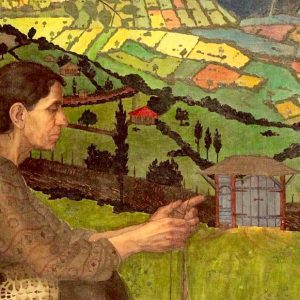 Early in Nino Haratischvili’s extraordinary novel, The Eighth Life, the narrator recalls what her great-grandmother told...
© LitHub
Back to top