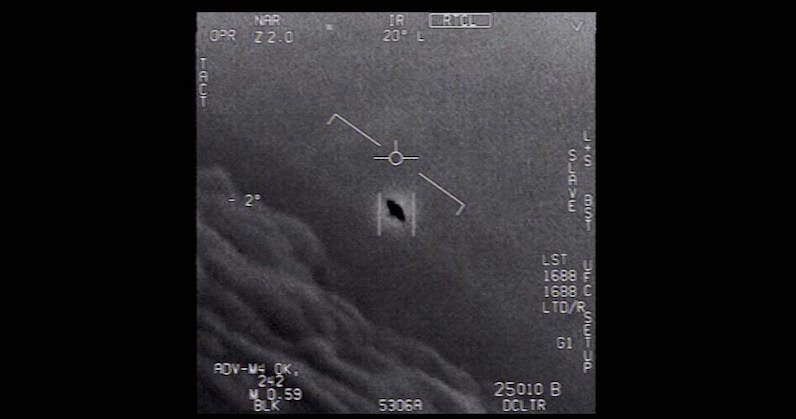 Before we lose our minds over the (exhilarating) mic drop yesterday by the Pentagon confirming that, yes, those images of unidentified aerial phenomena taken by Navy pilots and posted by former Blink-182 frontman and UFO enthusiast Tom DeLonge were, in fact, real, let’s not forget 2017.

In December of that year, The New York Times ran a blockbuster story about the Pentagon’s until-then top-secret UFO program, the Advanced Aerospace Threat Identification Program. In it, a former military intelligence officer verified what the X-Files told us back in, like, 1993: the government might not exactly have been hiding aliens from us, but they were keeping mum on the UFOs.

Twitter, the measure of all things good, is alight with the bright consensus that, right when it seemed like 2020 couldn’t become anymore like a. . . whatever genre we’re in now, the Pentagon asked us to hold its beer (with gloves).

The first video clip you’ll see was recorded in 2004, while the latter two were filmed in 2015.

To be very clear, the videos do not confirm extraterrestrial life, and the federal government is more spooked by what UFOs could mean for national security rather than what it might bode for residents on Maple Street.

Still, now is as good a time as any to revisit some of Lit Hub’s excellent content on UFOs, by authors who are probably now all thinking how much they told us so.

In 2017, contributor Nick Ripatrazione recalled his high school fascination with UFOs and the explosion of ufology studies in the 1970s. The outright weirdness of the 1970s, UFOs and all, is expounded in Erik Davis’ book High Weirdness, which Buzz Poole wrote about last summer.

Also in 2019, D.W. Pasulka, author of American Cosmic: UFOs, Religion, Technology, was behind one of our most popular pieces at the time, “Standing at Ground Zero for UFO Believers.” In it, Pasulka, a professor of religious studies, accompanies one of the world’s leading scientists and a wealthy UFO believer in the space industry to a sacred site in New Mexico where it is said an extraterrestrial aircraft crashed in the 1940s. Pasulka beautifully explored the nature of belief, and how reverence for the unknown is, in the case of some well-resourced scientific innovators, the very reason for their success.

And last month, we ran an excerpt from David Halperin’s Intimate Alien: The Hidden Story of the UFO; in his piece, Halperin retraces the strange case of Betty and Barney Hill, a couple in the 1960s who are often credited for the creation, or at least the popularization, of the alien abduction myth.

All these stories are worth revisiting not simply because it’s fun to read about UFOs and aliens, but also because our collective reaction to things unknown tend to reveal a lot about our trust in government and other authoritative institutions. Yes, our UFO memes say a lot about who we are, what we find funny, what we find concerning, and what we don’t care about at all.