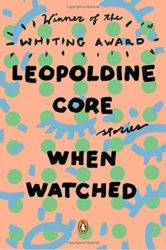 The following is a story from Leopoldine Core’s new collection, When Watched. Core's fiction and poetry have appeared in The Paris Review Daily, Open City, PEN America and Apology Magazine, among others. She is the recipient of a 2015 Whiting Award for fiction, as well as fellowships from The Center for Fiction and The Fine Arts Work Center. Core is the author of the poetry collection Veronica Bench.

She sees him at the grocery store. He doesn’t see her. He is with his daughter.  He is putting  green apples in a bag.

She grabs a pear and pretends to examine it. She puts it down. She walks over to the melons and stares abstractedly,  her heart hammering. She looks up and he’s smiling at her. His smile is warm. Instantly she feels weak and excited. He is walking toward her now.

“Hi,” he says. He’s standing right in front of her. She’s looking down.

He is divorced now so technically it’s possible that they could date. Or just have sex, she thinks. She can’t think about him without thinking about sex. And so she is afraid to look into his eyes, afraid he will know and be disgusted.

A man likes a woman to be ambivalent, she articulates in her mind. And she has never been ambivalent about who she wants to fuck. She has always been sure and she thinks that certainly there is nothing uglier than this, a woman who is sure.

They both ask how the other is and both say, “Good.” Clearly both are lying.

She tries to control her face. “I don’t know how to pick melons,” she says.

“The pecks,” he repeats. “Birds go for the sweeter ones.” This makes her blush. What he said feels lewd, filthy. But it isn’t filthy, she thinks. It’s me. I’m filthy.

She looks down at the little girl, who must be seven by now. It is a knowing face. A face that knows she is filthy. “Hi, Becky,” she says to the child, who says nothing.

“She’s a little shy,” he says, patting the girl on the head. But shy is the wrong word. Becky looks suspicious. Little girls know everything, she thinks.

“Well,” he smiles again. “It was nice running  into you.”

“Yeah.”  She cannot believe their encounter is over.  She hates the politeness of her life. He walks away.

She shops impatiently. She cannot bear the fact of time. How it keeps passing. How she has to wait to pay for cans of soup, to have sex.

She wants the man to know what she knows, that she wants him. And somehow she feels that he already does. She has fantasized so heavily and for so long that she feels her fantasies hold a kind of penetrative power.

It’s as if my daydreams have hacked into his, she thinks, her eyes shining. She feels certain that she has appeared  in his thoughts. She has been naked  in his thoughts and  this  same naked  body has returned at par- ticular hours of the day. Possibly we are having the same fantasies at the same exact moments, she thinks, which makes all the dullness between them in public seem coy and silly.

She walks to her apartment and passes a couple. All she hears the man say is “There are two types of people,” and instantly she hates him.

On her stoop there is a group of drunk teenagers smoking cigarettes. “You can’t sit here,” she announces, clutching her brown bag of groceries. “You have to leave.”

One woman says “Cunt,” under her breath. Another says “Bitch,” loudly. They all leave and she puts her key in the lock. I used to smoke cigarettes, she thinks, moving into the building. I used to be a teenager. Now I’m a Bitch and a Cunt.

Upstairs she gives herself an orgasm. The sun is setting. The window is open wide. Red light pours over the room. She rolls onto her side and imagines the man and his daughter eating dinner. She thinks that she would be happy just to fuck him once. She thinks that it isn’t true what people say about men, how they are dying to fuck all the time. She thinks that men are in fact a little prudish, hard to get in the sack.

She reflects, though, that she wouldn’t be happy to fuck him just once. She loves this man. And if they fucked she would say it. Almost against her will, she would say, “I love you.” She pictures him saying it back. “I love you. I’ve always loved you.” Then his face disintegrates.

She grows anxious. She thinks of all the pressures assigned to a person who is loved. She thinks that certainly if he loved her, it would be because he didn’t really know her. It would be because she was hiding certain hideous qualities. And it would only be a certain amount of time before these qualities surfaced. Soon he would know that she couldn’t drive. He would also know that even while walking or riding her bike, she often had no idea where she was going. He would know that she couldn’t give directions to tourists. He would make fun of me, she thinks and cries a little.

He would also discover that she had no urge for cleanliness, that in fact she must force herself to clean her apartment. That when she does not force herself, the kitchen quickly gets filthy, with mice walking idly across the counter, like it is their home. And the truth is that she doesn’t really mind it this way.

If I never had anyone over, she thinks, it would always be filthy. She is amazed by people who clean compulsively. These people happily call themselves freaks and she hates them for it. Because she knows who the real freak is: the slob.

There is also the issue of her body. If he loved her it would be because he hadn’t seen all of her. It would be because they had fucked in a certain dim honeyed light the first few times. Then, gradually, as they fucked more and more, he would start to notice all the small ugly things. And with each discovery he would stare in silence, weighing his love against the new offense.

She wonders if Becky said anything to her father after they walked away. She wonders if Becky said, “That woman is weird,” or simply, “I don’t like her.” These visualizations produce panic. It seems to her that a lot of men care what their children say these days. It was not like this when she was a child. Her father preferred when she did not speak; and often when she did speak, he would act as if she had not, humming to himself.

I was a child so long ago, she thinks. She thinks that it isn’t true what people say about time, that it’s fast. Because time has felt fat to her. Every minute has been like a steak passing slowly through space. And she is tired. Tired of wading through the lard of her lifetime, the minutes and the hours.

It’s not her creaking ceiling that she fears or the shadows that have begun pooling on the floor. Because she is no longer in the room. She’s in a canoe with a hole in it. She watches the water pour in and realizes she’s dreaming. Then she wakes herself up, jerking with a snort.

This happens several more times. She wipes the drool from her mouth. Why won’t I let myself dream? she thinks with a chill. She senses, as she has sensed before, that there is something she doesn’t want to know about herself. Something that the goblins of her subconscious know.

She rolls onto her side. With one ear pressed to the pillow she can hear her heart beating. The more aware of it she becomes, the louder it gets. And time is waddling by. The minutes are chubby and endless.

She decides that she would be a whole other person if the man were there beside her. She would be serene, weak and pink with sex. The air between them would sing as they stared at each other. And when the light went out she would not lie awake. She would sleep.

How to Solve a Book Emergency 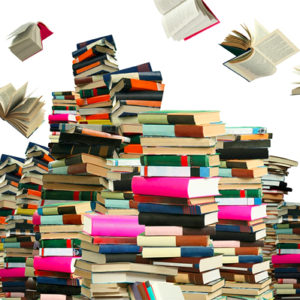 How to Solve a Book Emergency Long ago and far away, in a time when I didn’t own an iPhone, I found myself trapped on the side of a highway in New Hampshire....
© LitHub
Back to top