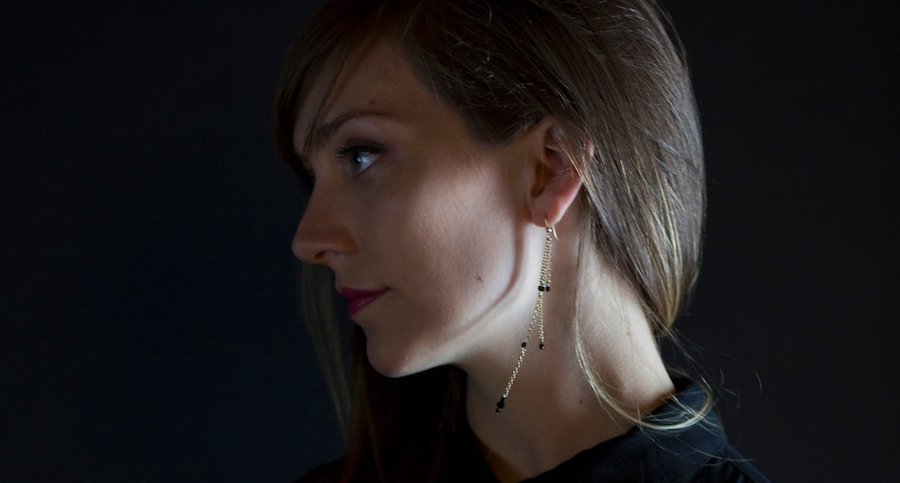 The Author of Pew Talks to Kristin Iversen
About God, Alienation, and More

“It’s nice to be a little unstuck in time,” Catherine Lacey told me, over the phone. “I’m always having to remind myself what month it is and what day it is and what whatever it is. It won’t always be like this.”

“This” meaning, of course, These Days, meaning, well, we all know what “this” means: the coronavirus pandemic, a four-month-and-counting period that has seen millions sickened, hundreds of thousands dead, disrupted the global economy, and exposed the precarity of countless societies—America’s, in particular. “This” meaning a time of, yes, ambiguity—when will it end? what comes next?—but also of accountability—who is to blame? how will they be held responsible? But then too, “this” encompasses the current reckoning with America’s racist past and present, a national uprising marked by a demand for accountability, but ambiguous only in the sense that there exists no previously charted course for dismantling so fundamental a part of this country as white supremacy.

“This,” then, is a time of discomfort, a time for growth. There are as many ways to perceive “this” as there are people experiencing it. “This” is real and yet defies definition. “This” feels like a relief, an exhalation, a gasp for breath, a gift, a burden, a curse, a purgatory, a new beginning, a repeat of the past. “This” feels like nothing at all and everything all at once. It won’t always be like this.

In Lacey’s latest novel, Pew, there looms a feeling of dread and uneasy opportunity similar to what permeates the air right now. In Pew, a society’s collective focus centers on an elusive, enigmatic visitor who evades all attempts to be understood within anyone else’s pre-existing frameworks. Set in a small town in the American South—which is to say, set in a small town in America—Pew opens with an introduction to its nameless, ageless, genderless, raceless protagonist, who has no memory of their earlier life, and who is discovered sleeping in the back of a church, taken in by a local family, and named after the only available concrete biographical detail about them, that is, where they were found: Pew.

“As a child, I read the Bible and I just believed it. And I read all of it…”

Over the course of a week, Pew interacts with a wide spectrum of townspeople, all but refusing to speak to any of them. They respond in myriad ways, revealing their varying degrees of discomfort at not being able to label and place Pew somewhere within their carefully organized concept of the world. There is a naked urgency to the town’s need to categorize Pew; the turmoil it causes some of them is palpable, a sharp reminder of how much our conception of who we are is based on how we measure ourselves against others.

“That’s such a human thing,” Lacey said, about the need to understand another person in familiar terms, and to then decide how they do—or don’t—align with ourselves. But it’s also a way of dismissing anyone who seems different; it’s a way of erasing nuance, this refusal to explore those things and people that make us most uncomfortable. It’s a smooth-brain approach to the world. It’s such an American thing, too.

Lacey, who now lives in Chicago, is from the South. Born in Mississippi, and having also lived in Louisiana, she came to New York City in 2007 for the master’s program in creative nonfiction at Columbia University, where, she said, “I felt like an alien and thought, It’s not going to work. I joked, at first, that I was an exchange student from the South.” But what she soon realized was that there was no escaping the problems she’d faced growing up—at least not as long as she was still in America.

“Even though this book is set in the South, I don’t think it’s necessarily about the South,” Lacey said. “It is in some ways, but I think even the South is not really about the South. Mississippi is not a distinct part of the rest of the country. It’s very much an extension of it. It’s a place where we can see certain aspects of our history and our present in maybe a higher relief, but it’s not a different place. Once I started to realize that, I had a different view of where I was from, and why some of my anxieties and disappointments of growing up there didn’t vanish when I went somewhere else.”

Alienation and disillusionment are themes that Lacey has explored in each of her previous books. Her novels—2014’s Nobody Is Ever Missing, and 2017’s The Answers—have little in common with one another plot-wise, the former being an intimate, haunting exploration of one young woman’s grief and the latter a vaguely sci-fi, wholly surreal look into the dystopian ways that technology has taken over our emotional lives. But, what both books share is a focus on young women whose search for meaning—in a world resolutely opposed to offering it—leads to their discovery of a strange kind of peace amid the ongoing ambiguity of their lives.

Pew is a provocative continuation of that interrogation into our struggle to categorize the incomprehensible; it features another narrator who is alien to others, and to themselves. It also feels like a reflection of Lacey’s own journey as someone who had a very religious upbringing, and then left it all behind as an adult.

“As a child, I read the Bible and I just believed it,” Lacey told me. “And I read all of it, because I had one camp counselor who was like, ‘You must read the entire Bible.’ And I was like, ‘Yes, ma’am,’ and read the whole thing.”

She laughed: “I didn’t understand most of it, but I was constantly looking for where it said there was a right way to think and a right way to be alive and a right way to conduct myself. I just really believed in the totality of it when I was a kid. And when I stopped believing, I felt like it took me ten years to stop being in a freefall.” Pausing, she laughed again: “I think I still am in a freefall, I’m just comfortable here now.”

While comfort does not play a big part in Pew, religion and its trappings do. For as much uncertainty as exists in the novel (where did Pew come from? what is their purpose in town?), there is also a clear structure in place, as the days of the week march on inexorably toward the town’s church-based Forgiveness Festival, the exact nature of which is unclear until the book’s final, gripping chapter (though the darkness at its center is hinted at throughout Pew’s pages).

“I just don’t think that ideas or ideologies can stretch to encompass the complexity of the world.”

However, even before the Forgiveness Festival takes place, one after another the townspeople seek t absolution from Pew, confessing, both directly and indirectly, their many sins; using Pew not to reach a deeper understanding of their actions, but rather to get to a place where they can feel the relief of forgetting what came before. Pew is an appropriate repository for their confessions precisely because their amorphousness, their lack of recognizable attributes, makes Pew appear ephemeral, unreal—the perfect place to bury the deepest of secrets, so they can stay buried forever. As one character says to Pew about the festival, “Forgiveness is sometimes just a costume for forgetting.”

And for what do these townspeople need to be forgiven? As is the case with all Americans—though specifically white Americans—they seek forgiveness for crimes both small and big, for the mundane and the devastating; for things that can be forgotten, and for things that never should be.

Pew takes place in America and so it is to be expected that many of the wrongs perpetrated by these church-going, small-town dwellers are racist and xenophobic; they are some of the same things that white Americans are grappling with and apologizing for during this current moment of reckoning. In Pew, as in life, there remains the question: Is forgiveness possible when the harm done is so all-encompassing? What about when the harmful actions continue, with no end in sight?

Lacey told me, “I realized just how American this craving for absolution is; I think it’s something that’s really baked into the Protestant foundation of this country, this belief that you can be forgiven—that there is a total forgiveness, a wiping clean of a slate through Jesus, through religion… It seems natural to me that that would have come out in the book, because that’s part of the American desire, in general—for our souls, and for the whole of our society: to be absolved and somehow washed clean of the ferocious violence and oppression that our country’s based on and continues to run itself on today.”

But, Lacey said, “There is no such thing. It’s too large.”

She laughed talking about the form some recent “apologies” have taken: “Like, the Dixie Chicks are now the Chicks? It’s like, ‘Please forgive us for the entirety of our career and everything we’ve ever done.’ It’s just so funny.”

And she spoke about the expediency of forgiveness, and the ways in which it’s become not a first step in but rather a substitute for accountability: “There are the huge, societal problems that need to be addressed, and I think right now white America is starting to realize we want to be forgiven for something we haven’t really apologized for, nor have we attempted to address or solve it in any way. And that feels like it’s part of the problem of right now. White people are still worried about being seen as good.”

Or, as another of the townspeople in Pew said, when trying to explain away past actions of his own and of his community, “We know we haven’t always been fair to everyone… But we’ve always been fair to people according to what the definition of fair was at the time.”

In Pew, Lacey makes clear that unquestioningly living your life by the definitions provided you by the Bible or your parents or your community will limit you in ways that are far more unsettling than inhabiting uncertainty would be. Uncomfortable though it may occasionally be, scary as it may seem to be freefalling into the future, it is, if not imperative, then at least instructive, to occupy that in-between space, to understand that there is no one way of being, there is no easy path to redemption, there is no promise of comfort. It won’t always be like this.

“I feel, more and more like the world just isn’t a place for polemic,” Lacey told me. “I think there’s this craving for our ideas to be all-purpose and seamless; cohesive and coherent. But I just don’t think that ideas or ideologies can stretch to encompass the complexity of the world, because humanity is just too ambiguous for that. And I think that to be a kind person or to be a person that’s paying attention and not just sleepwalking through life, you have to be recalibrating all the time. Because it’s not clear exactly how things should be all the time, and who’s right and who’s wrong, and the million problems that come up as we just try and live with each other.” 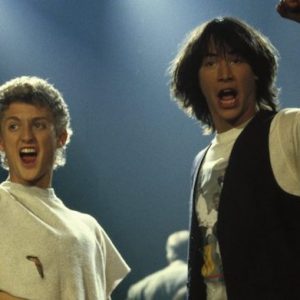 If you haven’t seen Bill & Ted’s Excellent Adventure: Why not? But also, do it immediately, unless you are dead inside...
© LitHub
Back to top