Carlos Fonseca on the Legacy of Ricardo Piglia

Remembering a Visionary of Argentine Letters

Where others see oppositions, great writers see the possibility of intertwining forking paths. Like kids in front of a stereogram, they are able to shift their gaze in ways that allow them to read the history of literature otherwise and, in doing so, write beyond the dead end of tradition. Ricardo Piglia, the monumental Argentine writer whose recent death coincided with increasing recognition of his work in the English-speaking world, was without a doubt one of these great visionaries.

For many years in the 1960s and 70s, Latin American literature seemed confined to the territory defined by the work of Jorge Luis Borges, the Argentine writer whose stories about libraries, encyclopedias, and mirrors also foreshadowed the postmodern fiction that marked writers and philosophers from Foucault to Foster Wallace, from Pynchon to Italo Calvino. Borges, whose stories abound with conceptual mazes, had sketched such a perfect a labyrinth with his work that Latin American writers felt that they had to write either with him or against him. Either erudite, conceptual writing like the master’s, or a commercial brand of magical realism that was nothing but the insipid offspring of García Márquez’s One Hundred Years of Solitude.

In the turbulent atmosphere of the Latin American 1970s, a writer’s relation to Borges was seen not only as a choice between high- and low-brow, but also as a political decision. Borges, the old blind master who had failed to condemn the atrocities committed by the Argentine dictatorship, was inevitably seen by the progressive younger generations as the dusty librarian of a reactionary tradition. Only a reader and writer as capable as Borges himself could salvage him from the mausoleum he seemed bent on building around himself. It took Ricardo Piglia to prove that, beyond the false oppositions between Borges and the left, between Borges and the people, there lay an unexplored fictional territory. Today, when the name of Roberto Bolaño runs the risk of being tamed by canonization, it seems to me crucial to return to Piglia, for in his works we find the keys for liberating Latin American literature from the stereotypes that always threaten to imprison its radical potential.

In his 1988 Theses on the Short Story, Piglia famously stated that every short story recounts two stories: a visible one and a subterranean one. Every story is a double story, with a hidden, secret reading. Eighteen years before, he had stormed the Argentine literary scene with a debut novel demonstrating this principle. Artificial Respiration (Duke UP, 1994), first published in Argentina in 1980 during the military dictatorship, opened up the unforeseen possibility of writing simultaneously with Borges and beyond Borges. Piglia, an avid reader of both hardboiled detective fiction and James Joyce, of both Dashiell Hammett and Franz Kafka, had conjured a novel that owed as much to the blind master as to the low-life scenarios depicted in the novels of another Argentine writer: Roberto Arlt. Every literary tradition, the novel seemed to suggest, hides beneath it a secret treacherous counter-lineage: a line of flight that opens it to the future.

Piglia, who was fond of Faulkner’s famous statement “I wrote The Sound and the Fury and learned how to write,” had inventively reimagined literary history in a novel; in bringing Borges into contact with everyday reality, the book uncovered his works’ latent political dimension. In the years to come, in novels like The Absent City (Duke UP, 2000), Money to Burn (Granta, 2004), or Target in the Night (Deep Vellum, 2015), Piglia would continue to explore this double tradition’s inherent possibilities while simultaneously emerging as one of his generation’s fundamental literary critics. “Criticism is a form of autobiography, a critic writes his life when he describes his readings,” Piglia would often mention in his books and classes. His novels and essays, within which the protagonist is the reader-as-detective, attest to a life dedicated to exploring fiction’s political limits. In the tradition of other great Latin American experimentalists like Sergio Pitol, Sylvia Molloy, Enrique Vila-Matas, Margo Glantz, and Roberto Bolaño, Piglia’s writing forces the reader to redefine that subtle frontier that separates fiction from criticism and literary history.

For an avant-garde writer interested in displacements, duplicity, and recontextualizations, it is no surprise that the first and perhaps most important shift marking his literary career happened at the level of his name. Born Ricardo Emilio Piglia Renzi, Piglia decided—as early on as 1967—to imagine, under the name of Emilio Renzi, the alter ego that would later traverse his novels as their hero. By following Renzi’s intellectual odyssey, his works sketched a subterranean autobiography whose allure grew exponentially throughout the years, particularly with regards to a rumor that began to spread across the Latin American and Spanish literary circles. It was said that there lay hidden something more impressive than his transgressive novels or his brilliant critical essays, a secret work of even more transcendence: his diaries.

By the time I shyly entered his classroom as a student at Princeton, where he was teaching a course on the avant-garde novel, Piglia was already a living classic. A legend who, each year, spent a couple of months in a small town in New Jersey, perhaps in an attempt to hide from the fame that seemed to persecute him in Latin America. With his characteristic humbleness, at Princeton he seemed bent on making himself anonymous. Never did he speak of himself as an author, nor did he ever refer to his own writing. And yet, most of us—his students—couldn’t help feeling that we were in the presence of an idol. We knew his “secret,” and we could see it in each of his gestures. By the time I met him, Piglia was already Piglia, the literary icon who had written some of the most important books in Latin American literature. The man who had changed the way a whole continent read and the clearest heir of Borges. And so, hearing him speak about Borges, Joyce, or Kafka—accompanied by those hand gestures that were undoubtedly his—we couldn’t avoid thinking that literary history was happening in front of our eyes. Literature, he used to say, sketched a parallel society: a secret society that plotted against official culture. Secretly, we all felt part of Piglia’s plot to overtake the literary establishment.

During those years before his retirement we heard him sketch—with his classical phrase “It would be interesting to one day write…”—hundreds of invisible books, as if he were handing us the task of writing them ourselves. Somehow, he knew that the time had come to tackle the one work that would consecrate him as the classic he already was. It was time to revise the 327 notebooks that comprised his diaries, which he had started to write more than half a century early, in 1956. By then the diaries had reached mythical status: we all knew of them, we all speculated about them, but none of us had read them, with the exception of a brief fragment he had published years earlier in a book of essays, with the audacity of the fisherman who leaves the caught fish hooked in order to catch a larger one. Piglia had staged his visible work as an excuse for the one work that lay beneath it all, the one work that finally made Emilio Renzi and Ricardo Piglia coincide. In the tradition of Pavese, Kafka, and Gombrowicz, the diaries were the culmination of a life dedicated to thinking of literature as a way of life.

In these days after his death, I have been revising the notebooks containing the notes I took during the two years I had him as a professor at Princeton before his retirement. In them, I found a page with an underlined title painfully relevant today: “Last Class with Piglia.” Beneath it, a phrase that is unmistakably his: “What is at stake in endings is the production of sense.” As I read the sentence, I understood that, somehow, Piglia had read and edited the narrative of his life as if it were a novel. Always attentive to form, always conscious that literature is a form of life, Piglia remained contemporary up to the very end. Where other writers had given up to old age and to the mediocrity that sometimes accompanies public exposure, he had remained actual and relevant, and the younger generations thus saw him as their direct influence. I couldn’t help but think that he had made sure, conscious as he was that endings condense meaning, to leave for the end of his life the publication of those diaries; they somehow rounded up a life dedicated to thinking through that project so central for the avant-garde: the project of turning life into art.

Within the same notebook, in an entry about his beloved Macedonio Fernández—the Argentine writer he took to be Borges’s true teacher and avant-garde predecessor—I have found another one of Piglia’s signature dictums: “True legibility is always posthumous, reading is always tied to posterity.” When, in 2015, already ill, he began publishing his diaries under the title of The Diaries of Emilio Renzi (forthcoming from Restless Books), Piglia was setting the conditions for the posthumous rereading of his works. Always on the verge between autobiography and fiction, without ever falling prisoner to dead-end alley of “autofiction,” Piglia had left behind the biographical clues for understanding a life devoted to reading literary history otherwise. A life devoted to reading literature against the grain.

“Each epoch dreams the one to follow,” Piglia liked to quote, referencing the work of one of his favorite philosophers, Walter Benjamin. Today, in his absence, I feel that the time has finally come for us to read and reread him thoroughly, for his writing always faced the future and not the past. A body of work that seems destined to blast open the doors of the literary establishment and to help us awaken from the historical nightmare that Joyce once envisioned and which threatens to become a reality.

Carlos Fonseca Suárez was born in Costa Rica in 1987 and grew up in Puerto Rico. His work has appeared in publications including The Guardian, BOMB, The White Review and Asymptote. He currently teaches at the University of Cambridge and lives in London. Colonel Lágrimas is his first novel.

When Your Hometown is Crammed With Aspiring Writers 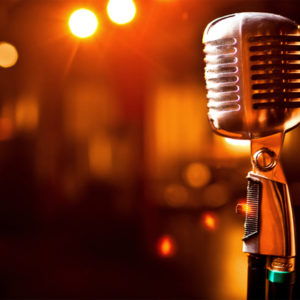 The first time I can recall being denied my voice, I noticed but did not resist. My second-grade music instructor had asked...
© LitHub
Back to top